May 9, 2019 / fskokoski@gmail.com / Comments Off on Trinidad Day Four: A Visit to Interesting and Reclusive Oilbird Cave At The Asa Wright Nature Center. 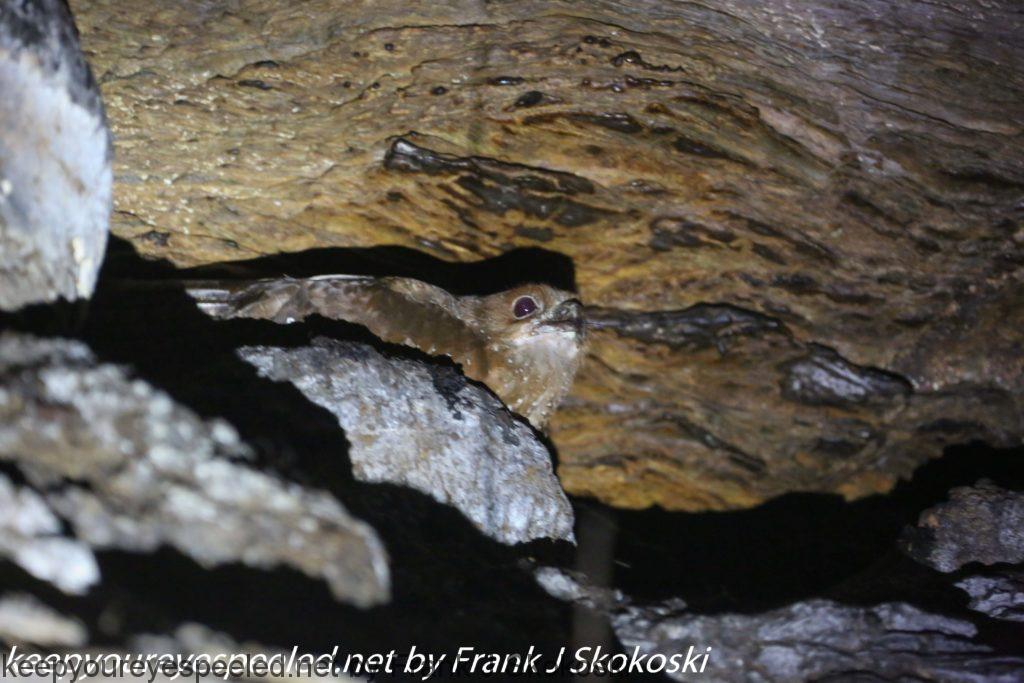 Although I got in  late after the night walk, I was still up before the sun on Saturday morning. Well, I wouldn’t see the sun anyway, it was cloudy when I left my cottage, and a cooler 74 degrees. I once again stopped in for a cup of coffee and then walked along the driveway leading to the lodge. 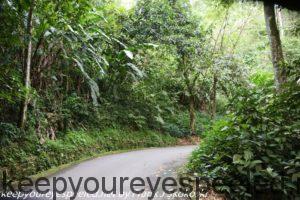 I was getting familiar with the many fruit trees, flowers and streams growing along the winding road leading to the lodge.  Wild tobacco grows everywhere and attracts many species of birds. 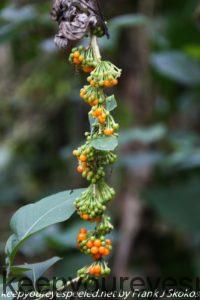 There was also coffee cacao  and banana trees,  remnants of the old plantation, growing next to the native trees and shrubs. 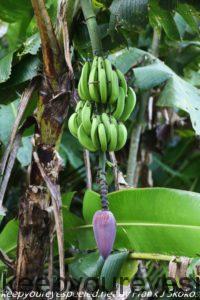 Instead of walking to the main highway this morning I decided to visit the bird bland on the coffee plantation trail. 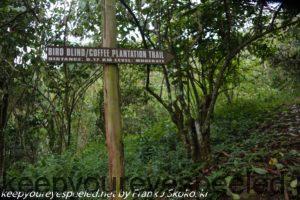 I followed the steep trail up a  hill. There are a lot of hills on the Asa Wright Nature center property. . 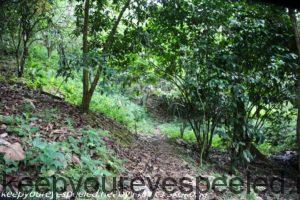 Here were more reminders of the old plantation including a number of cacao trees growing along the trail. I am very familiar with these trees from my visit to Ecuador where I stayed on a cocoa plantation  for a few days. 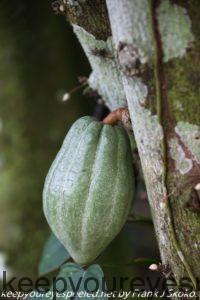 I came to the newly constructed blind and entered hoping to see some birds. I wasn’t disappointed. I soon saw this, I believe female white lined tanager foraging in the trees. 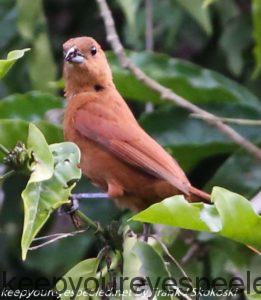 There was a lot of wild tobacco trees growing near the blind and they attracted  a number including this palm tanager. 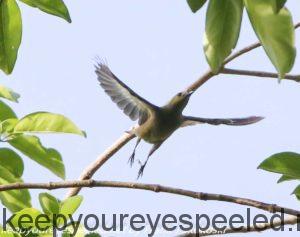 It was difficult to photographs the birds in the thick vegetation but I did get a few  more including this, I believe, male silver-beaked tanager. 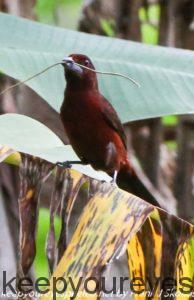 I remained in the blind a bit but wanted to get my walking in before breakfast. So I hiked back down to the driveway  and walked it out to the main road. 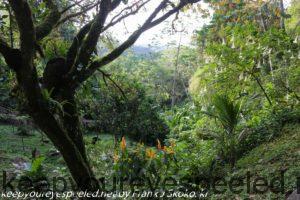 I saw a few more birds on my walk including some more tanagers, parrotlets and this beautiful tropical mockingbird. Mockingbirds became one of my dad’s favorite birds as he grew older. I always think of him when I see one of these beautiful birds, even their tropical version. 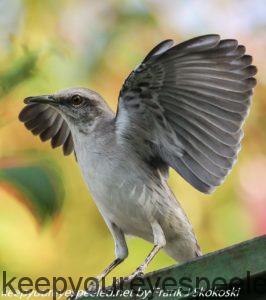 I walked back to the lodge just in time to enjoy another  hearty breakfast with the good company and conversation. Here is a link to some more photographs from my hike. Trinidad Day Four Morning hike April 27 2019. 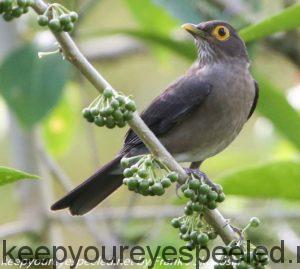 I met my friends from England and three other guests on the veranda shortly after breakfast.  We were soon joined by  our guide who would lead  us to the famous oilbird cave located on the Asa Wright Nature Center property. The cave is home to a breeding colony of over 150 oilbirds.  While not endangered,  we learned that the birds are reclusive. They are nocturnal and return to their nest in isolated in caves during the day. In order to not disturb the birds one can only visit the caves with a guide from the nature center. After a short orientation we were soon on our way to the cave. 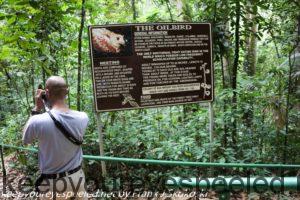 The tropical sun quickly warmed the temperatures into the 80’s as we made our way down the steep trail. 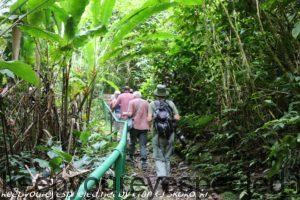 Our guide pointed out a number of birds along the way including a blue-crowned motmot which was feeding on a wasp nest. 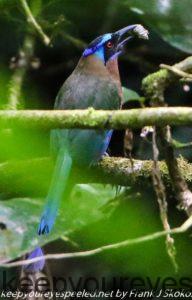 We also saw a few butterflies along the way. 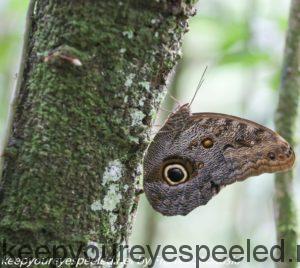 We came to the river where the cave is located and our guide led us in to see the oilbirds nesting inside. 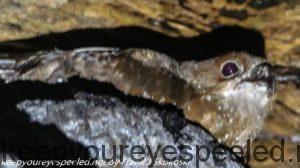 These large birds are the only nocturnal fruit-eating bird in the world. They forage for palm dates and other food at nigh using specially adapted eyesight. . They navigate  using  echolocation similar to bats. The term oilbird was associated with the fatness of the young checks from the oils in the palm dates they eat. Natives cultures cooked the young chicks to obtain the oil for cooking and lamps.  They were strange-looking birds. You could see the piles of fruit they collected at night. It was an amazing experience. Here is a link to some more phonographs of the oilbirds. Trinidad Day Four Oilbirds April 7 2019. 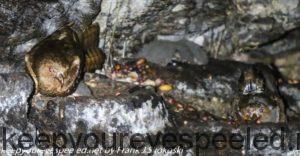 After taking turns peering in the cave we made our way back up the steep trail discussing the strange birds we just observed. Here is a link to some more photographs from our hike. The rest of the group decided to search for some more birds in the rainforest but i decided to head back to the lodge. I sat and edited photographs on the veranda, listening to the many birds in the nearby trees, until lunch time.  Trinidad Day Four Oilbird hike April 27 2019. 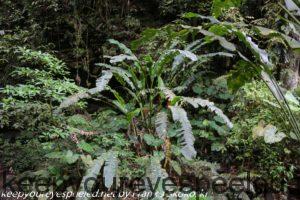 If [in a rain forest] the traveler notices a particular species and wishes to find more like it, he must often turn his eyes in vain in every direction. Trees of varied forms, dimensions, and colors are around him, but he rarely sees any of them repeated. Time after time he goes towards a tree which looks like the one he seeks, but a closer examination proves it to be distinct.