Walking In The Rain At The Wetlands. There Is No Such Thing As Bad Weather In May.

May 22, 2016 / fskokoski@gmail.com / Comments Off on Walking In The Rain At The Wetlands. There Is No Such Thing As Bad Weather In May.

Walking In The Rain At The Wetlands. There Is No Such Thing As Bad Weather In May. 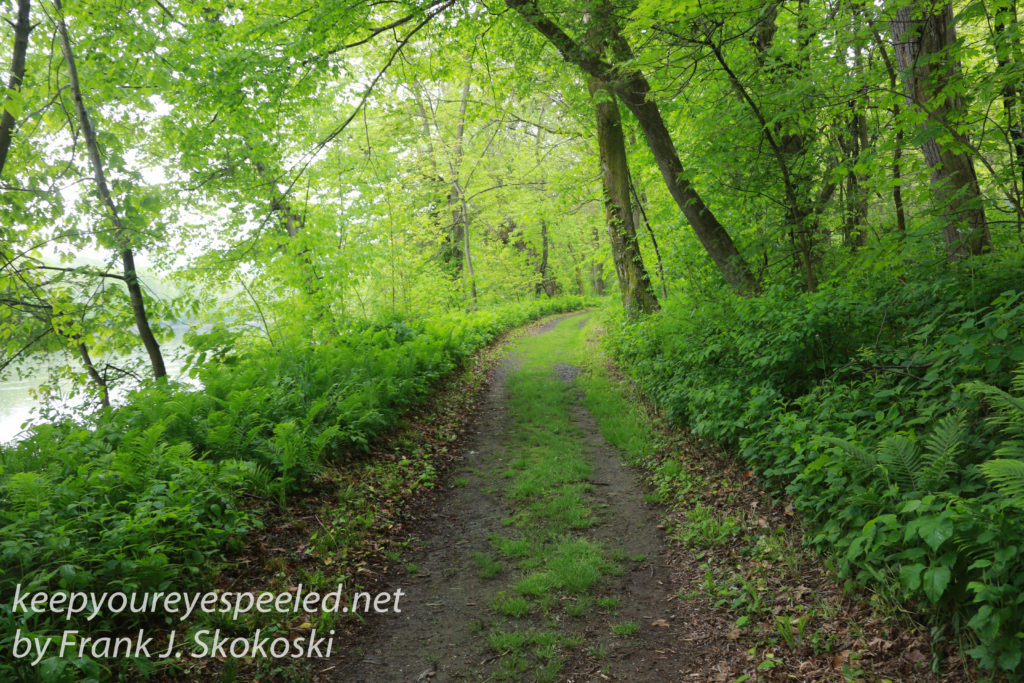 We had another rainy day here in Northeastern Pennsylvania. It seems it is raining every weekend. I’d prefer some  sunshine but a little rain isn’t going to stop me from enjoying the Spring. I decided to hike out  the PPL wetlands again since it is so lush and green this time of year and there is almost always an abundance of wildlife to be seen out there. . 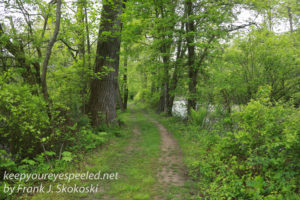 The rain was falling pretty hard when I arrived. Even though you could hear the many species of birds singing in the now leafy trees it was hard to find and photograph them in the rain. But there was plenty of plants and flowers to be seen, including many types of ferns, sprouting their new green fronds. 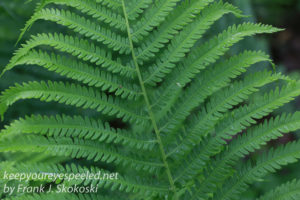 The skunk cabbage and mandrakes, so pretty in early spring, have passed their peak growth now but still look green and alive in the rain. 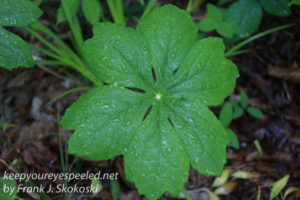 As I said it was hard to see and photograph  the song birds singing high in the treetops but the catbirds were still fluttering about in the shrubs and brush along the trail. 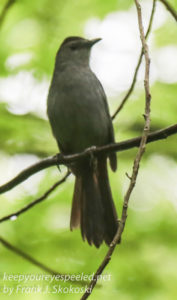 As were the always noisy red winged blackbirds. 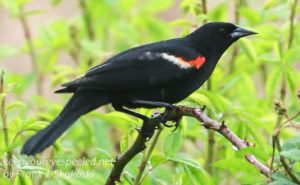 And the robins were out, taking advantage of the rain to gather a quick meal. 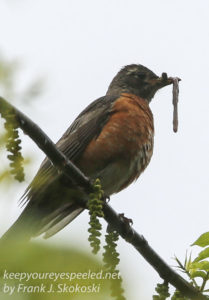 I was surprised to only see a few turtles and frogs along the trails.  I thought they would enjoy the warm Spring rain but apparently they didn’t. I only saw  this turtle, one more  and one frog on my entire hike. 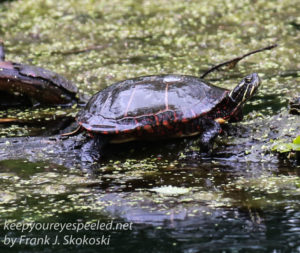 The ponds and canals were now arrayed it that light, fresh , lush green growth of Spring and it was a pleasant walk even in the steady rain. 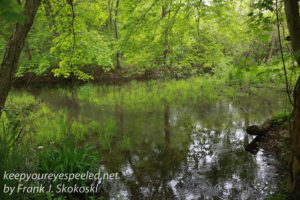 I left the wetlands and walked over to the adjacent riverlands when the rain let up a little. I was now able to see and photograph some of the songbirds including this baltimore oriole singing in the rain. 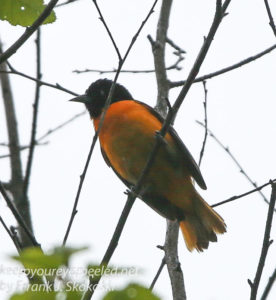 As I walked under the ancient trees nearer the river I could hear the calls of the pileated woodpecker I have been chasing for weeks now and he once again eluded me. 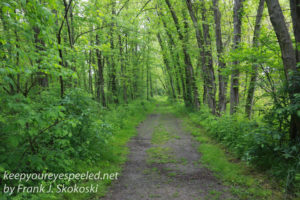 I did get to see this   exotic and beautiful indigo bunting. 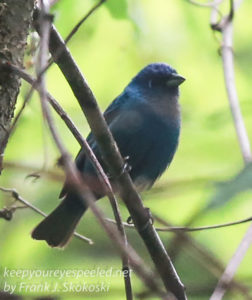 And along the river I also watched this song sparrow drying itself and letting me take some close up photographs. 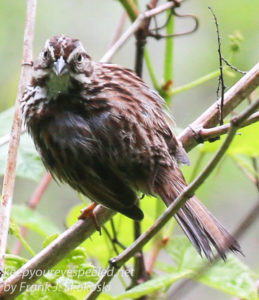 The rain had stopped and as I walked through the fields I saw, and heard,  quite a few yellow warblers in the trees along the paths.  They are usually perched high in the tree branches and hard to see without  binoculars. I love capturing this beautiful bird in photographs so I can share it’s beauty. 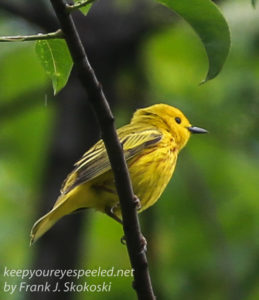 I heard so many other birds and tried to find them, also perched high in the now leaf covered trees. I was unable to find most of them but did  see a few including this common yellow throat warbler I saw for the first time last week. 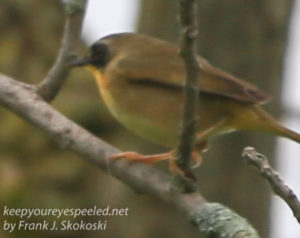 As I returned to the canals and ponds of the wetlands I saw quite a few phoebes darting above the water in search of insects. 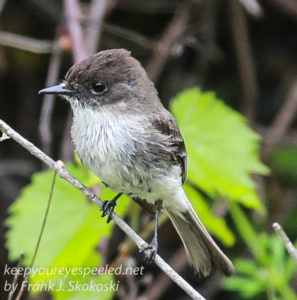 There is a phoebe nest near the parking lot and there are now  baby phoebes  huddled in the nest. They will soon be joining the many other wild creatures that live in these beautiful wetlands. 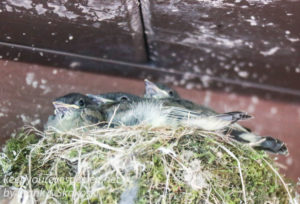 And they aren’t only  birds either. I saw a few deer roaming in the woods, including this one peeking from it’s cover in the undergrowth to take a look at me. Here is a link to more photographs I took of the many critters I  saw in the wetlands today. https://keepyoureyespeeled.net/photographs-page-2/nggallery/photographs-page-two-blog/ppl-wetlands-critters-may-22-2016 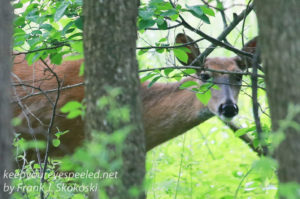 It was a rainy day but it’s  May and it doesn’t matter what the weather is like here in Northeastern Pennsylvania as long as your outside. The Earth is waking up and what a great place to see it at the PPL Wetlands. Here is a link to some more photographs I took on my walk there this morning. https://keepyoureyespeeled.net/photographs-page-2/nggallery/photographs-page-two-blog/ppl-wetlands-may-22-2016 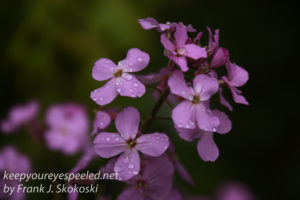 These people have learned not from books, but in the fields, in the wood, on the river bank. Their teachers have been the birds themselves, when they sang to them, the sun when it left a glow of crimson behind it at setting, the very trees, and wild herbs.”
―Anton Chekhov, “A Day in the Country” 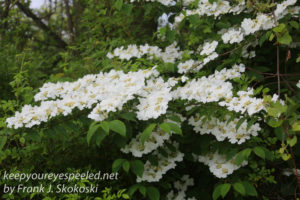