Waterfalls And Icicles: A Frigid Hike In The Lehigh River Gorge

January 18, 2022 / fskokoski@gmail.com / Comments Off on Waterfalls And Icicles: A Frigid Hike In The Lehigh River Gorge

Waterfalls And Icicles: A Frigid Hike In The Lehigh River Gorge 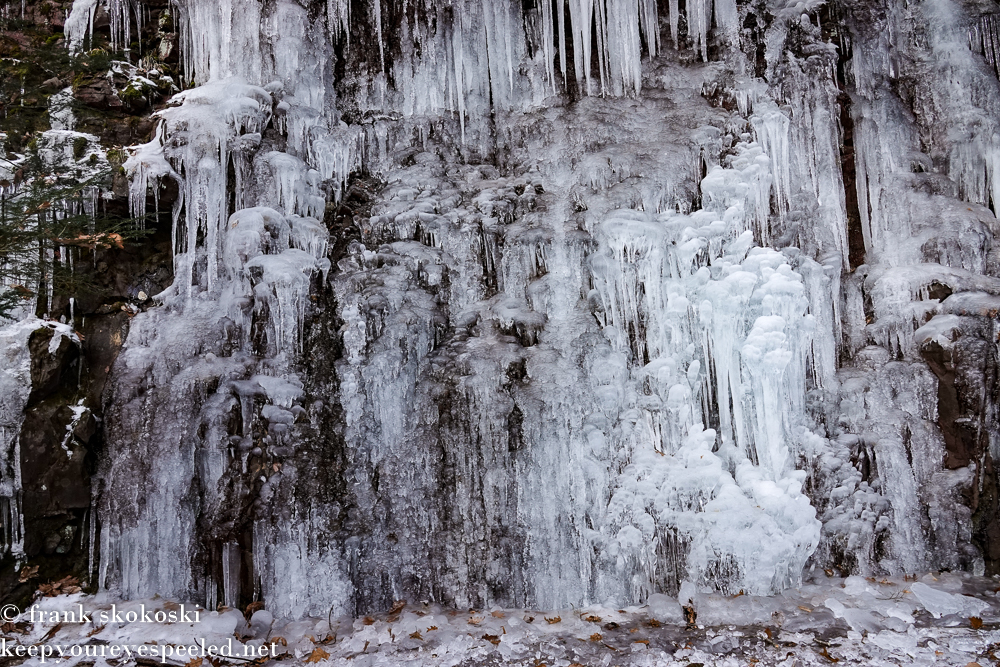 It has been a while since I hiked in the famous Lehigh River  gorge at the Rockport access in  Carbon County. Searching my blog posts I learned  it  has been almost a  year. And,  like my last visit,  I  ventured down here  to avoid the strong winds  on the mountain where I live in Hazle Township, and to see the ice formations that occur  in the  gorge in the winter. 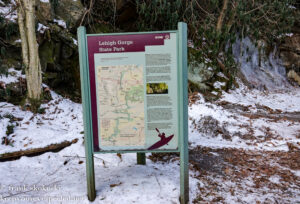 I referred  to the Lehigh River gorge as being famous because, in my opinion, it is, for many reasons. It has a long history. There were the  Native American paths, the canals and the railroads that followed the  Lehigh River as it meandered through the 26 mile gorge it formed  from around White Haven in Luzerne County  to Jim Thorpe in Carbon County. I have written quite a few blog posts on the history of the  gorge and you can find them by using the search tool on my blog website. 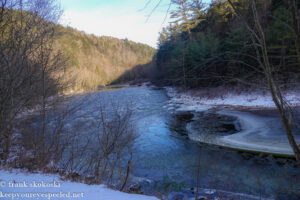 The small town of Rockport along the gorge has an even greater claim to fame.  The famous, but, complex and  controversial,  American ornithologist John James Audubon, stayed with a family  here in 1829. He  explored the Lehigh River gorge and Great Pine Swamp looking for  birds to paint and illustrate in his famous Birds of America book.  He described the area as follows. “We now rattled down a steep declivity, edged on one side by almost perpendicular rocks, and on the other by a noisy stream, which seemed grumbling at the approach of strangers. The ground was so overgrown by laurels and tall pines of different kinds that the whole presented only a mass of darkness.”    Audubon and his Journals, Vol. 2 page 314.  I believe this is the stream, the Buck Mountain Creek, he described in his journal. It is not much different almost 200 years later. 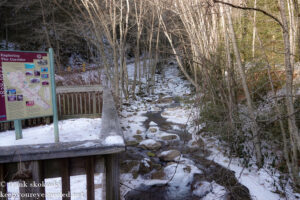 It was -1 degrees when I arrived at the parking area at the bottom of the gorge near the river on Saturday morning.  The wind wasn’t as bad in the  protected ravines of the gorge but it still was windy. In the summer this parking lot would be filled with cars, buses and trailers with rafts. On this sunny and frigid January morning there were only two cars in the lot. One with a gentleman walking his dog and the other brought  four young folks, who also didn’t mind the cold and wind, on a hike  off to explore the gorge. 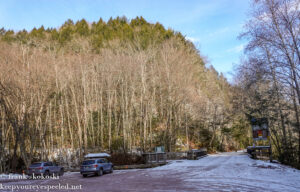 After leaving my Jeep I decided to first walk south on the trail that that follows an abandoned railroad right of way.  This trail is a portion  of the longer  D & L Trail and part of the Delaware and Lehigh National Heritage Corridor. 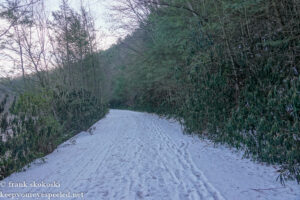 The trail was icy and snow covered. I walked about .3 miles and visited Luke’s Falls one of two waterfalls near the Rockport access.

Near the falls is an abandoned stone structure that was used for some activity associated with the railroad. 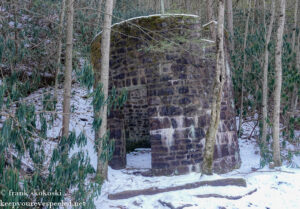 As I walked back along the partially frozen Lehigh River, 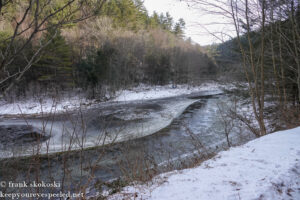 I noticed the icicles that formed along the cliffs on the sides of the gorge. 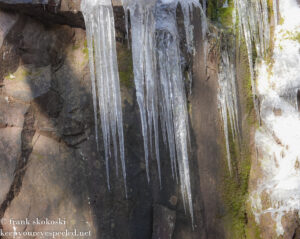 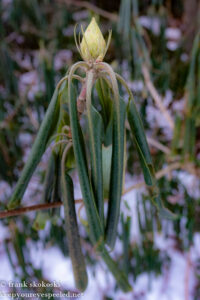 I dreamed of the warm days of summer when these beautiful flowers will be in bloom as  I walked past the parking lot and headed north on the trail. Large rocks described by Audubon could now be seen along the trail 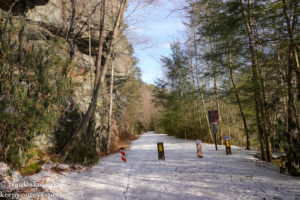 Along these steep rocky  cliffs of the gorge beautiful ice formations  form  when the frigid  arctic air arrives in the winter. 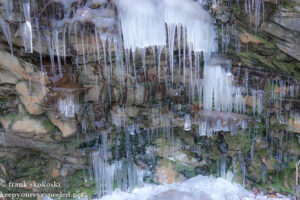 This year they were not as impressive as some years because of the lack of rainfall  these  past few months . 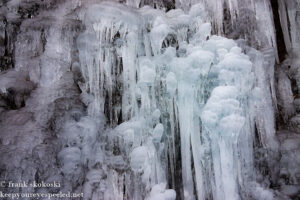 Even with the reduced waterflow the  ice formations were still complex, 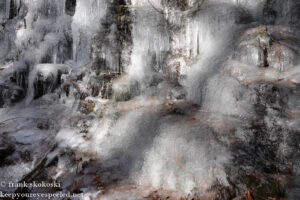 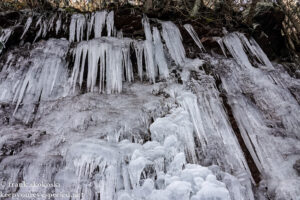 Beautiful Buttermilk Falls was a short distance past the ice formations on the trail. 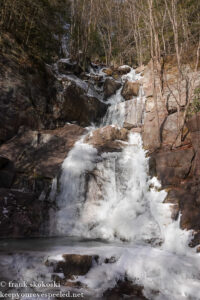 I stopped at the falls and stood in the frigid morning air to admire the partially frozen waterfalls. 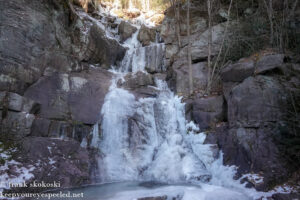 As I continued my hike on the snow covered trail, 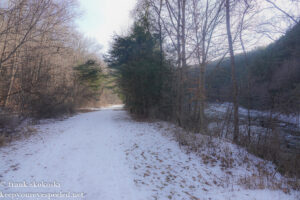 I observed the  pretty brown  oak leaves that were blown off of the trees and laid  on the snow. 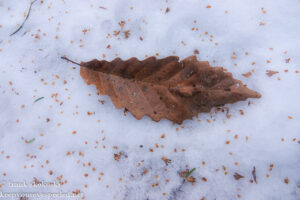 The ferns growing along the trail were frozen, and 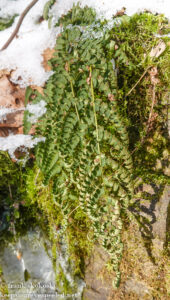 I was surprised to find this green blades of grass protruding through the snow. 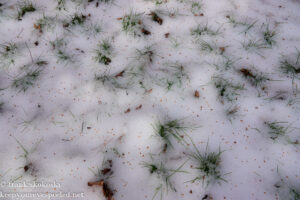 The January sun was still low in the sky, but it still provided some warmth when it would appear over the mountain ridges of the gorge.

It was amazing how much the weak sunshine warmed my frozen finger and toes in the frigid morning air.

I walked on the trail along the Lehigh River for about 1 1/2 miles. It was cold but I could have continued. The blue skies and sunshine inspired me. I think a could have walked until sunset. Sunshine is exhilarating even on the coldest days of January. 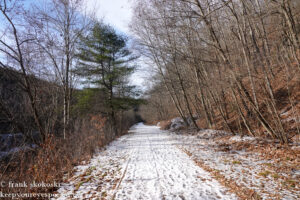 However, I had a family gathering to attend so I had to end my hike and return to my Jeep.  Up until this point on my hike out I didn’t see any wildlife activity. However as the sun  warmed the frigid air I heard some black-capped chickadees high in the tree tops and saw a couple flocks of dark-eyed juncos scampering in the snow and low tree branches along the trail. 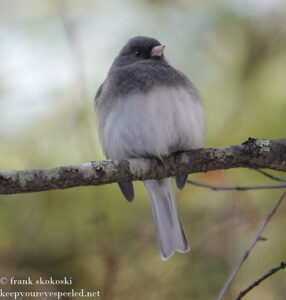 On my  return hike I stopped to again admired the beauty of the waterfalls and  ice formations now  illuminated by the morning sunshine.  This is a link to a gallery   with some more photos of the ice formations I saw in the Lehigh River gorge. Lehigh River Gorge State Park ice January 15 2022. 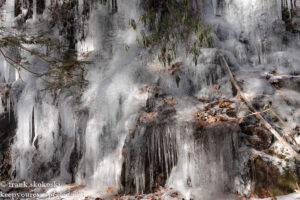 My original plan was to only walk 3 miles in the frigid cold. I hike a few extra miles on Friday anticipating the cold temperatures and high winds. Wind chills were well below zero. However, I didn’t mind the cold and hiked 4 miles when i returned to the parking lot.  Winter is not my favorite season, but it still offers it’s own beauty, a I saw in the ice formations and waterfalls on my hike.  However, I’s still rather enjoy flowers and song birds on my hikes, and  long for the first warm days of Spring. Here is a link to a gallery with some more photos I took on my five mile hike in the frigid Lehigh River Gorge Lehigh River Gorge State Park January 15 2022. 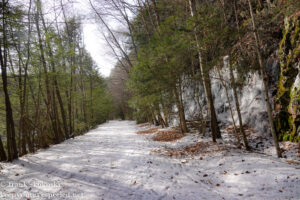 It is now winter, dead winter. Desolation and silence reign in the fields. No singing of birds is heard, no humming of insects. The streams murmur no longer, they are locked up with frost J.M.Usher