Winter In The Lehigh River Gorge: Some Interesting Ice Formations And Other Cool Stuff.

Winter In The Lehigh River Gorge: Some Interesting Ice Formations And Other Cool Stuff. 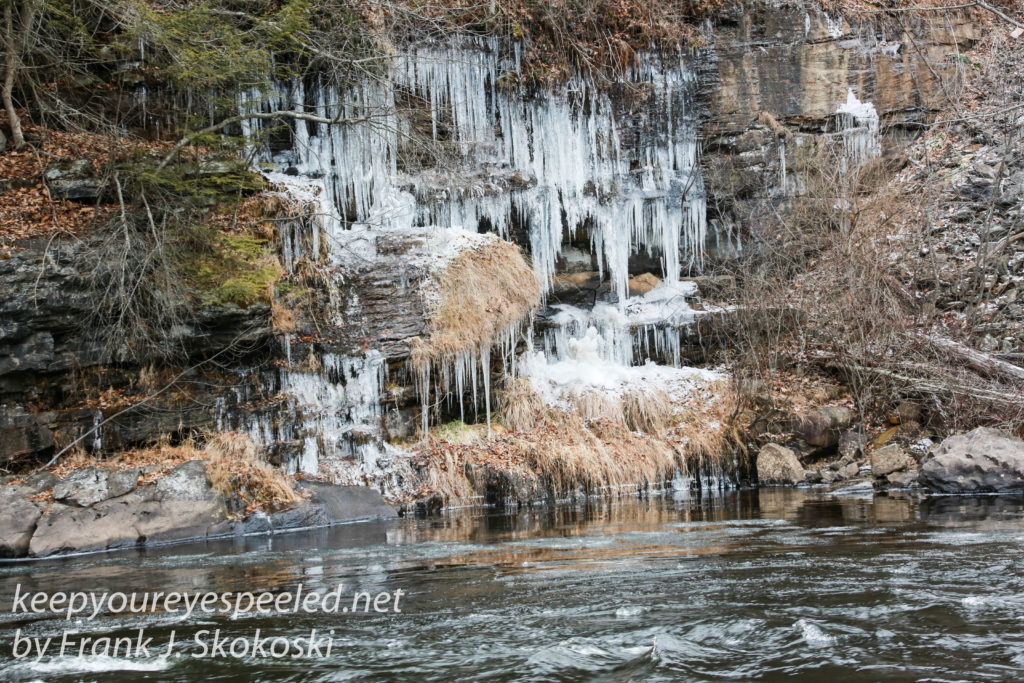 We got some colder weather here in Northeastern Pennsylvania today, temperatures were in the low teens  this morning.  I decided to  hike out the Lehigh River Gorge State Park at the Rockport access entrance to see how much ice has formed on the river.  Unlike the warmer months, when the parking area is filled with buses, cars, hikers, bikers and white water rafters, the place was deserted.  In fact I was the only car there. 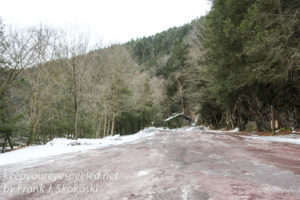 No complaints  from me, I like the solitude,  as I proceeded south on the trail that follows the old rail road right of way along the Lehigh River. 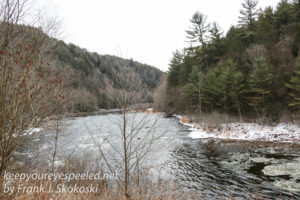 The trail was not what I expected or had hope to find . It was very icy, caused by snow mobile traffic when the snow was soft and had now frozen into a trail of ice. I had to avoid the center of the trail and walked along the edges. I soon came upon the small,  but always pretty, Luke’s Falls. 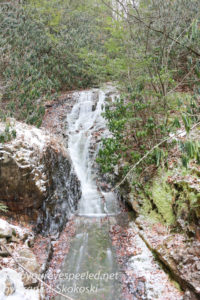 Adjacent to the falls is an old stone structure that housed something to do with the railroad. i have tried to research what is was but with no success. If anyone has any information please feel free to comment. 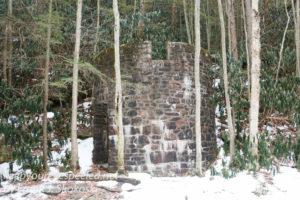 I continued my hike along the river.  I walked through the thick growths of rhododendron along the trail. 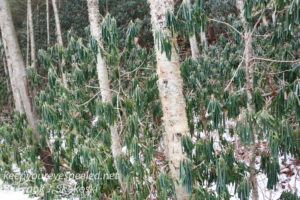 I noticed that the leaves had rolled up from the frigid temperatures.  I first noticed this impact  the cold has on the leaves while delivering newspapers on a cold January morning  many years ago. 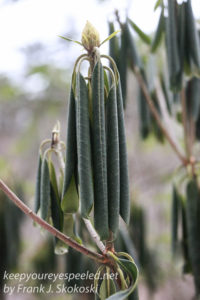 The trail is lined by the steep slopes of the Broad Mountain to the west and south and the waters of the Lehigh River to the east.  Ice was just beginning to from on the slow moving areas  of the river and for the most part it was ice free. I decided to hike down to take a closer look at the frigid waters. 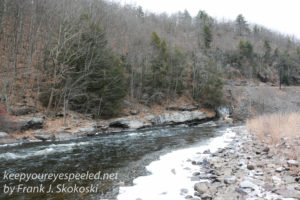 As happens so many times on my hikes, I was rewarded for my curiosity with an amazing discovery. I found beautifully intricate ice formations that formed along the river. 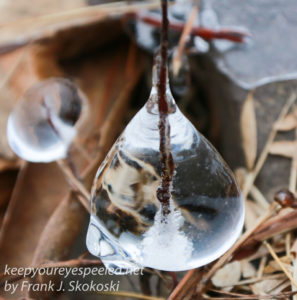 I have never seen ice form in perfect circles like this and I have no idea how they were formed. But they  beautiful and they reminded me that there is always something to be found, even on the coldest of days, if you keep your eyes peeled while walking in the woods. 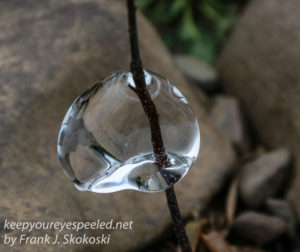 There were also many ice formations forming along the river. 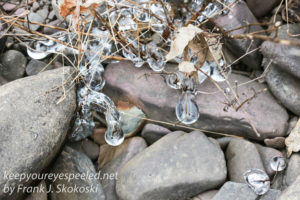 I walked back up to the trail and made another discovery. At first, when I walked past this discovery I thought it was a pile of dirt kicked up by the snowmobiles. As I walked by I thought it looked unusual and, upon a closer inspection, realized it was a frozen mole. Not sure how or why it died but I am sure it will be a welcome winter meal for some critter tonight. 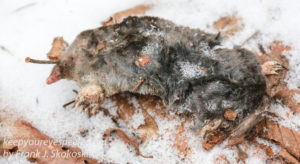 I walked down another mile or so, enjoying the ice formations that formed from the small streams, creeks and waters flowing down the steep slopes of the gorge. 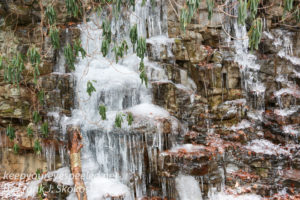 Along my way I found some remains of the past season such as this now frozen mushrooms. We have had some warm spells in December and I believe these mushrooms grew during those warm days only to be quickly frozen when the temperatures dropped. 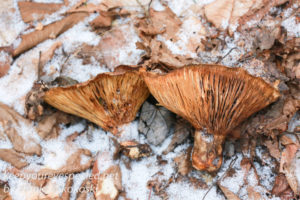 The snow created a white carpet throughout the gorgfe but it was scattered with the fallen leaves, 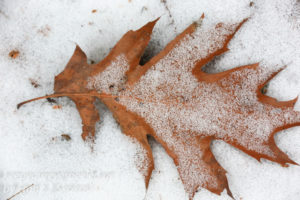 or pine needles from the trees above. 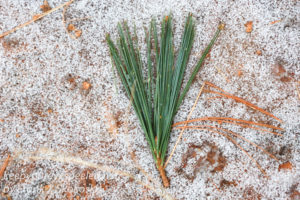 And some plants clung to life along the cliffs and slopes of the gorge, such as these ferns. 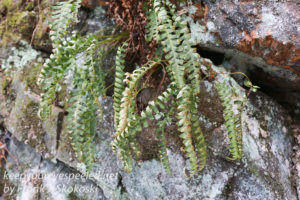 I walked back to the parking area and then walked east to visit Buttermilk Falls. Along the way I again walked by large ice formations that formed from the waters flowing down the cliffs along the river. Because of the unseasonably warm weather, and lack of rain, they were not as large as they are in most years. Here is a link to my photo gallery with more photographs of the many ice formations I saw  on my hike today. https://keepyoureyespeeled.net/photographs-2017/nggallery/photographs-2017/Lehigh-River-Gorge-ice-January-7-2017- 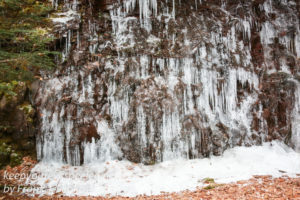 I continued my hike out to Buttermilk Falls which were also  flowing ice free. 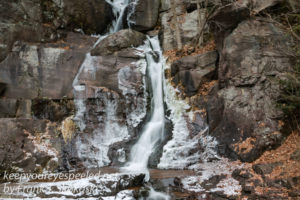 Again, many years I find them partially frozen this time of year, and, in some cold years, they are completely frozen over. Not this year, but we still have two months of winter left, and  it may be frozen solid before it is over.  I hope not, I will enjoy a hike in the cold, but I look forward to the lengthening days and warmer temperatures of Spring, and it is only seventy-one days away, not that I’m counting. Here is a link to a gallery with more photographs from my hike along the Lehigh River. https://keepyoureyespeeled.net/photographs-2017/nggallery/photographs-2017/Lehigh-River-Gorge-hike-January-7-2017- 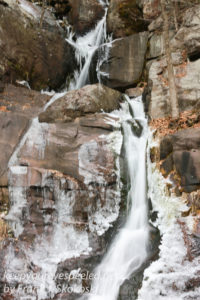 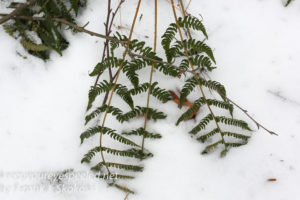