A Crow And Bald Eagle Fight , Palm Warblers And Snow: A Magical Afternoon At Community Park.

A Crow And Bald Eagle Fight , Palm Warblers And Snow: A Magical Afternoon At Community Park. 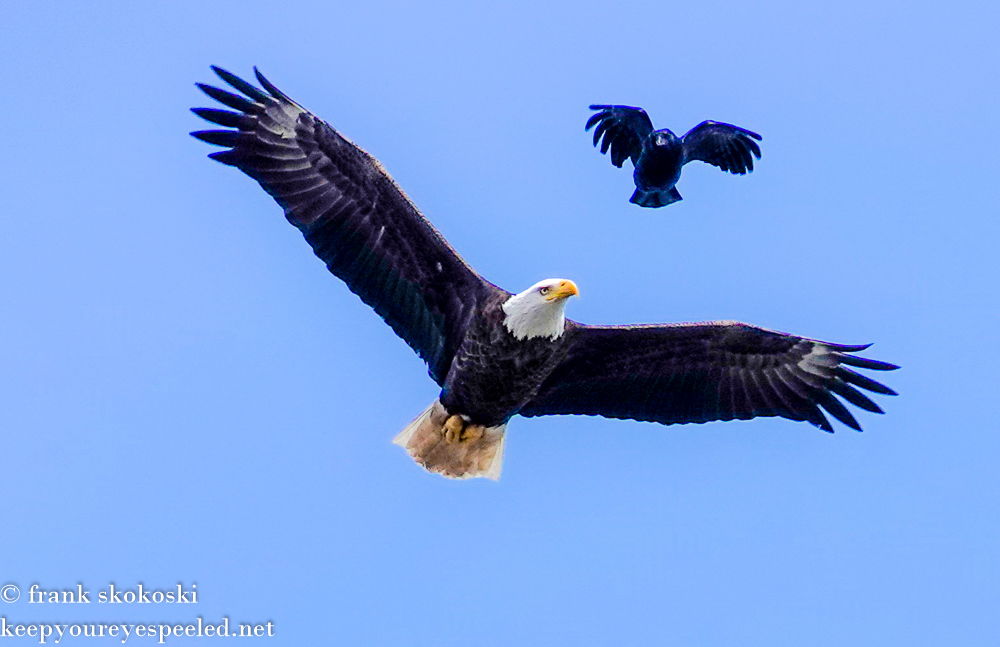 It was  one of those spur of the moment decisions. It was cloudy and cold when I decided I wasn’t going to hike at the Community Park near my home in Luzerne County that afternoon.  A late Spring snow storm had just deposited almost 5  inches of wet snow on our area. Most of the snow had already  melted by the afternoon  but I didn’t want to take a chance and have to trudge through any snow that may have remained.  I didn’t think it would be a good day out with my camera. But,  just as  I was going to begin  my afternoon hike on the streets near my home ,  I changed my mind, and decided to take the 5 minute drive to Community Park. Well, I think it was a good decision. 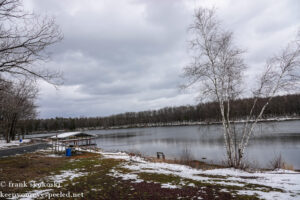 Arriving at  Community Park I  walked down to Lake Irena and found a dreary wintery scene . Thick clouds, a northwesterly wind and  cold temperatures near 40  degrees with snow on the ground  did not give  much hope to see much wildlife activity.  Being  the optimist, I brought my camera along anyway. 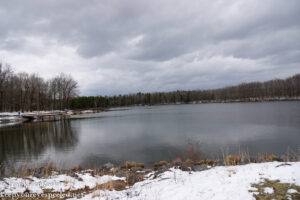 I began my hike around the lake and soon saw a pair of double-crested cormorants swimming  in the cold waters.  These were the first I had seen this year. 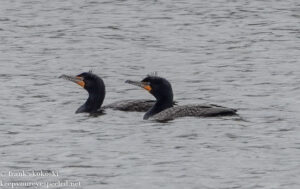 I continued my hike around the lake. I was pleased to find that most of the snow had melted on the trails. The only other wildlife  I would see on my first walk around the lake were  a couple of Canada geese. 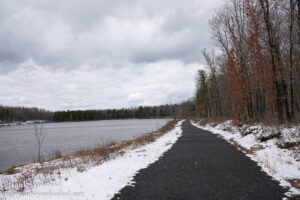 On my second walk around the lake the thick clouds began to break up and patches of blue sky appeared.  Occasionally the strong April sun would shine through the clouds quickly warming the cold air. 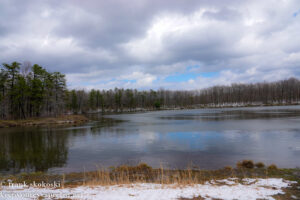 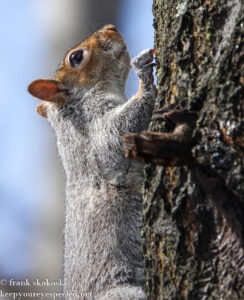 I saw a few hermit thrushes in the tree branches along the lake. 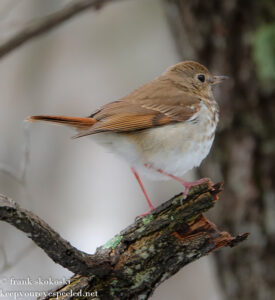 The clouds continued to dissipate and  more blue sky and sunshine appeared making for some beautiful scenery. 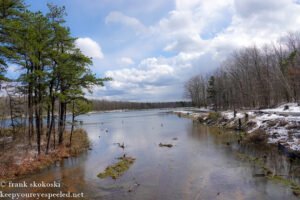 I saw a pair of palm warblers foraging for food along the lake. 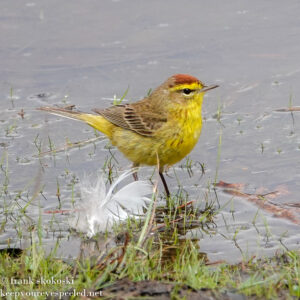 These pretty birds did not seem to mind me watching them as they searched for food  in the grass along the lake. . It was strange to see these  birds that are so common in  sunshine and warmth of Florida   here  in Pennsylvania in  the snow. 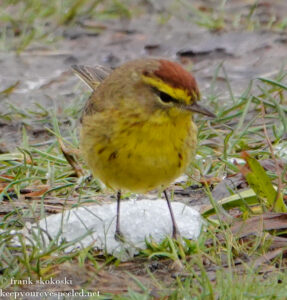 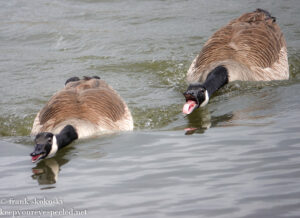 and let them know. 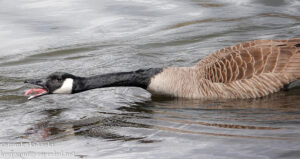 This one was very agitated and hissed and honked until the other geese moved away. 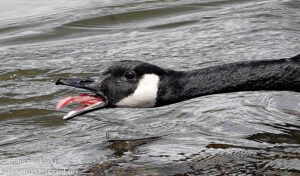 The skies continued to clear providing  beautiful scenery as  I  took another walk around the lake. 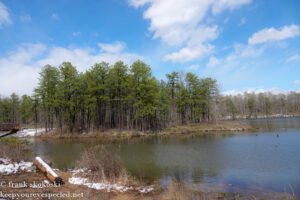 Even more birds appeared and almost seemed to be posing for me including this tufted titmouse, 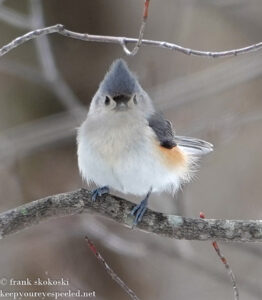 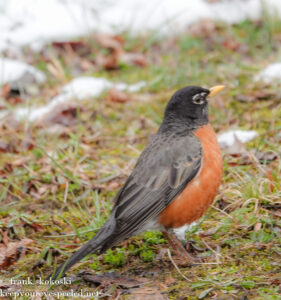 a downy woodpecker and 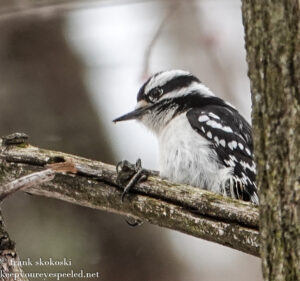 a few chipping sparrows.  I was surprised to hear  the cries of a belted kingfisher and saw it, briefly, fly across the lake. Here is a link to some of the birds I saw on my afternoon hike. Community Park birds April 19 2022. 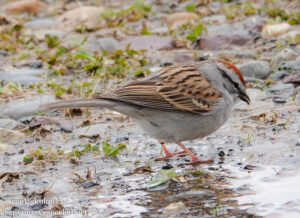 The sun continued to shine in the  partially clear skies and  I was so glad I decided to  hike at the Community Park.

But, just as i was finishing my hike I  looked up and saw a bald eagle soaring over head. I always love seeing these majestic birds soaring in our skies. 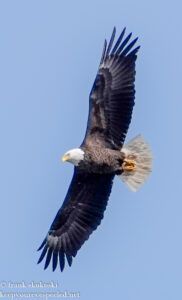 It kept flying over the lake, almost like it was dancing in  the sky. 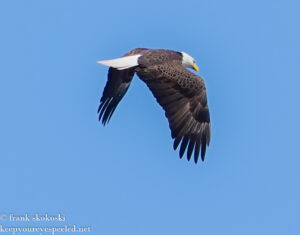 I  kept taking photos, hundreds of them, and it wasn’t until I got home and edited and cropped them that I realized I had been watching an American crow  attack  the  bald eagle. 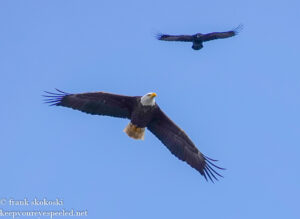 The photos were amazing. The crow dive bombed the bald eagle, 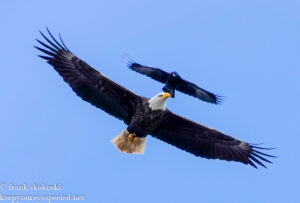 and plucked one of it’s wing feathers.  The photos are amazing and there are dozens of  them  uploaded to a gallery on my blog website. Here is the link Community Park Bald Eagle April 19 2022. 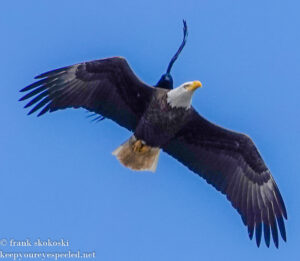 After watching the bald eagle I finished my three mile hike under sunny skies. It turned out to be a beautiful afternoon and  I was so glad I  changed my mind and decided to hike at Community Park. Here is a link to more photos from my hike, Community Park hike April 18 2022.

“The sun was warm but the wind was chill. 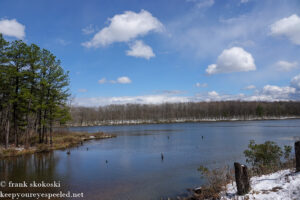 You know how it is with an April day.
When the sun is out and the wind is still,
You’re one month on in the middle of May.
But if you so much as dare to speak,
a cloud come over the sunlit arch,
And wind comes off a frozen peak,
And you’re two months back in the middle of March.”
–  Robert Frost