A Hot End Of July Hike At The PPL Wetlands

A Hot End Of July Hike At The PPL Wetlands 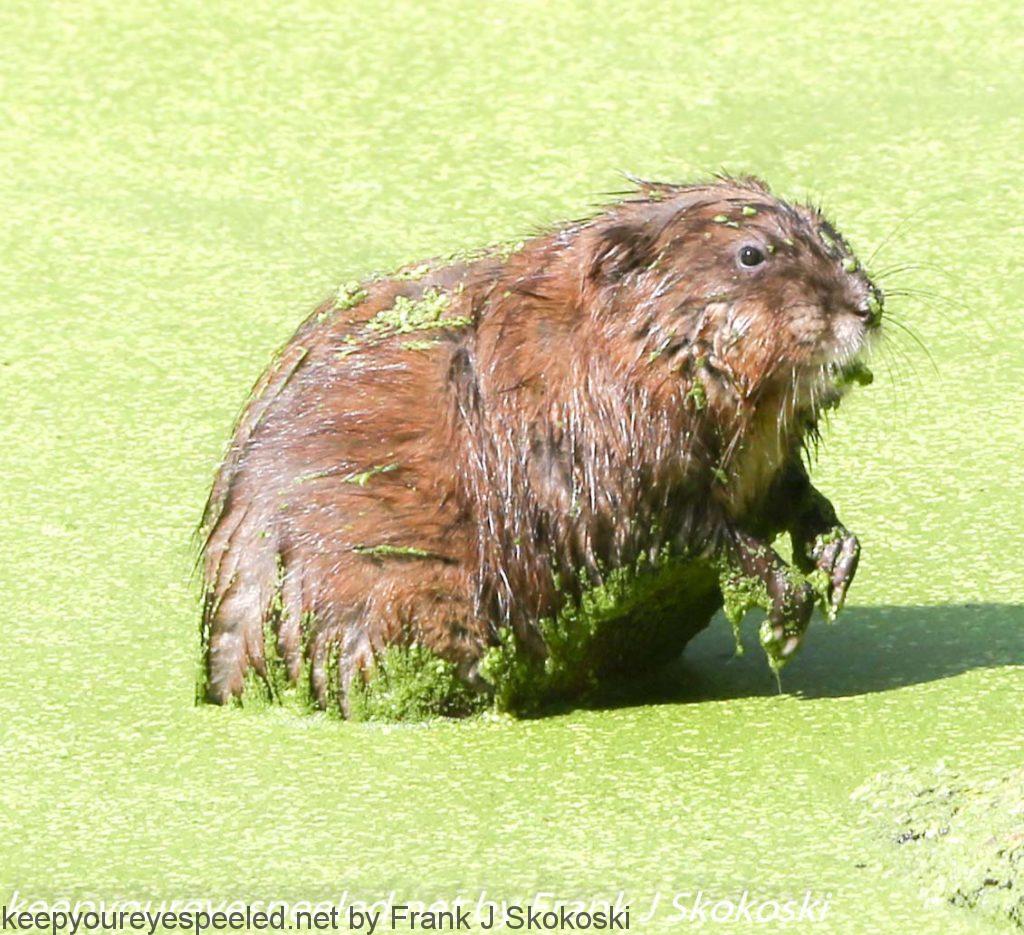 It’s hard to believe this is the last weekend of July. It seems like we were just welcoming the flowers and  migratory birds back to the woodlands of Northeastern Pennsylvania.  Summer is now near its peak. I decided to hike in the PPl Wetlands in Salem Township yesterday. I got off to a late start, arriving at the river lands section of the park around 10.am. 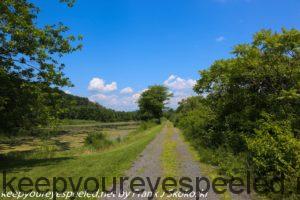 Usually I  start my hike in the wetlands. . Temperatures were in the low 60’s overnight but had already warmed to near 80 when I began my hike near Lake Took-A-While. And it would get hotter. There were a few folks fishing along the shores of the lake and as few talking a morning stroll. 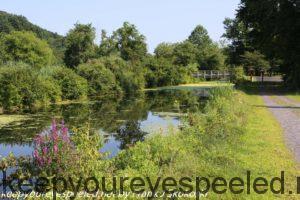 In addition to the people there was hundreds of dragonflies darting along the lake. They love the warm weather. They usually reach their peak in late July and August. I was able to photograph a few that alighted on a leaf for a rest. 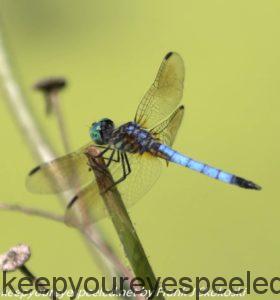 I  have always been fascinated with these ancient insects that have exited long before the dinosaurs. 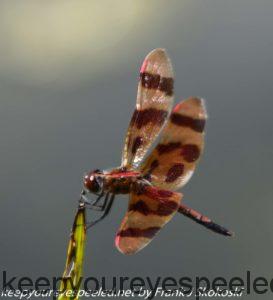 And with an abundance of dragonflies and other insects you find flycatchers, like this one, I;m not sure of the species sitting in a tree looking to make one of them a meal. 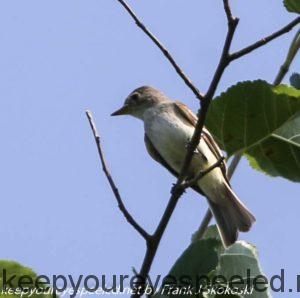 Walking into the wetlands and saw, and heard, a lot of catbirds fluttering in the trees and brush. 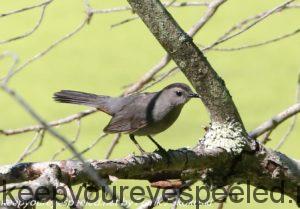 I think this is a juvenile. 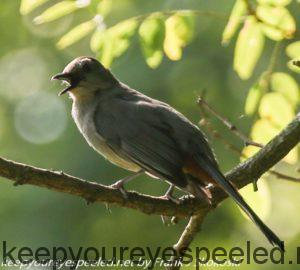 As I continued into the thick woods of the wetlands I found some relief from the heat, as did some  frogs and 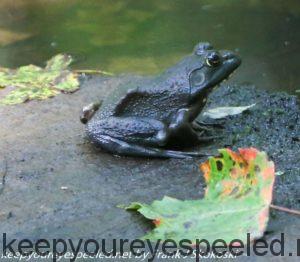 turtles I saw on the ponds and canals. 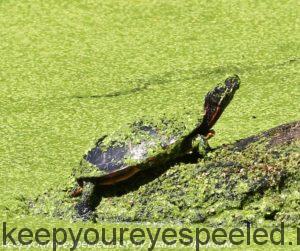 On the last couple of visits I made to the wetlands I didn’t see any wood ducks. I had seen at least six mating pairs in the Spring.  Well this time caught a quick glimpse of a couple of these secretive and elusive birds. 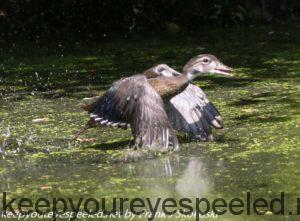 The young ducklings should be getting ready to leave their nests but I only saw the adults on this hike. 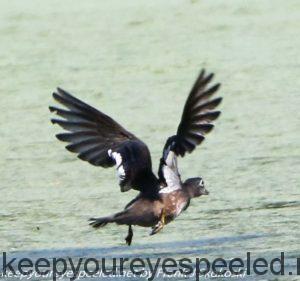 Another resident of the wetlands was also enjoying the shade, as well as a  meal of the duckweed now covering the ponds and canals in the wetlands. My friend the muskrat. 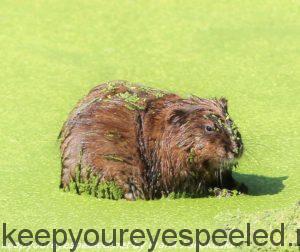 It seems like he doesn’t mind that I photograph while he munches on the duckweed. 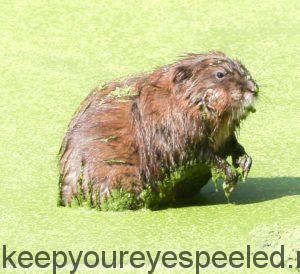 On my return walk from the wetlands I followed the trail along the Susquehanna River. 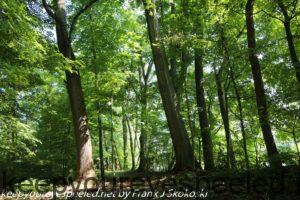 Under the thick canopy of the ancient trees I found this black staining polypore mushroom. 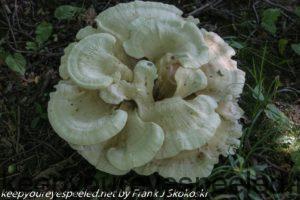 There were also some almost ripe blackberries growing in the clearings. 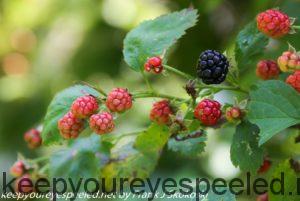 It was getting hot even in the shade of the  trees along the river. It got even hotter when I returned to the open trails of the river lands. Most of the birds were quiet now, although a saw a few goldfinches, this is a male, 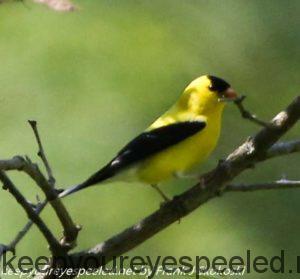 and this blue heron. 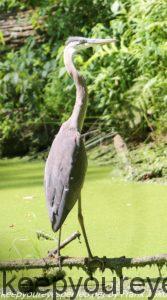 I also encountered a nest of cicada killer wasps.  These large wasps look intimidating but are actually quite docile and would allow you to pick them up. 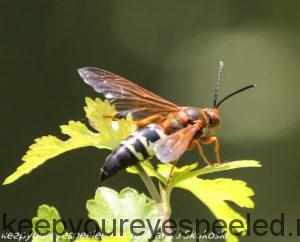 The are fewer wild flowers growing in late July  but I still found some growing along the trails in the riverlands including this purple loosestrife, and 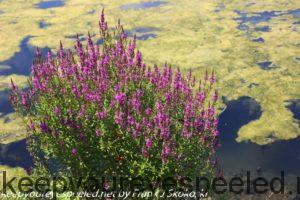 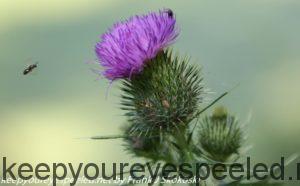 I continued my walk past the lake and along the Susquehanna Warrior trail. It was hot. I had hiked about 6 1/2 miles and decided to head back. Most of the wildlife activity was quite now. It was too hot. But I saw this horde  of caterpillars  feeding on a milkweed plant. I think they are monarch butterfly caterpillars. 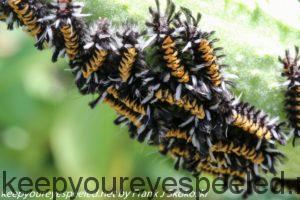 Mid summer at the wetlands is not as exciting as Spring, when everyday brings something new. However, even on the hottest day of summer you will find something interesting in the wetlands if you walk slow and keep your eyes peeled.  Here is a link to a gallery of some more photographs from my hike. PPL Wetlands July 27 2019. 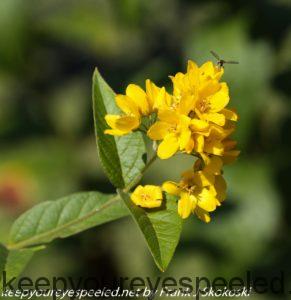 “Summer afternoon—summer afternoon; to me those have always been the two most beautiful words in the English language.” -Henry James