A Most Memorable Day In My Life: The Election Of Pope Francis.

September 23, 2015 / fskokoski@gmail.com / Comments Off on A Most Memorable Day In My Life: The Election Of Pope Francis.

A Most Memorable Day In My Life: The Election Of Pope Francis.

Pope Francis’s arrival in the United States yesterday and his appearances in Washington today have caught the entire world’s attention. His message of preserving this beautiful world God gave us and caring for the poor are  welcome in our Nation and our planet.  It was with much emotion that  watched this humble and peaceful man celebrate mass at the National Shrine in Washington D.C. I attended law school at the Catholic University and walked the route the Pope took many, many days. I attended Mass at the Shrine every Sunday the two years I lived on campus.  So many memories entered my mind as I watched him enter the Shrine. And  it also brought back memories of the wonderful experience I had of being present when the white smoke arose over St Peter’s in Rome letting the world know we had a new Pope. I felt I had to share that experience with the world on my blog tonight.

A few years earlier, being of Polish descent I decided to attend the funeral of Saint John Paul II. What a wonderful experience that was. But that is for another day. In March of 2013, I decided to again return to Rome in the hope of seeing history made by the election of a new Pope, without the death of a prior Pope for the first time in a thousand years. 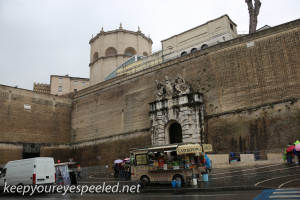 I arrived on an early  flight on March 13th and my hotel was not available. I was tired but walked through the rainy streets of Rome to the Vatican 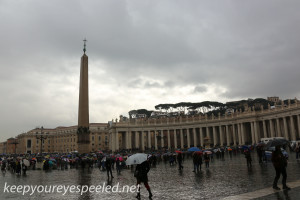 I stood in the rain with a small crowd for a short while when black smoke arose into the sky indicating no Pope was chosen in the morning session. 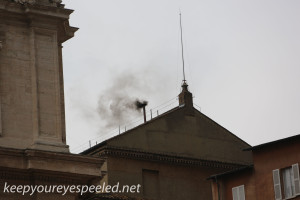 I knew that there was a good chance no Pope would be elected in the week I was staying in Rome. It was just a chance I took. I left the St’ Peter’s and was told my room would not be available until 3p.m. I was tired, wet and hungry and decide to visit the many treasures of the Vatican Museum again. This is a link to some more photographs from my morning at the Vatican. https://keepyoureyespeeled.net/rome-march-13th-to-20th-2013-election-and-installation-mass-of-pope-francis/nggallery/rome-2013/rome-pope-francis-st-peters-morning-visit-march-13-2013 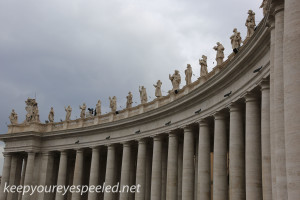 I only had a few hours to spendin the museum, which is hardly enough to get a glimpse at it’s many wonders, and also had a nice meal. 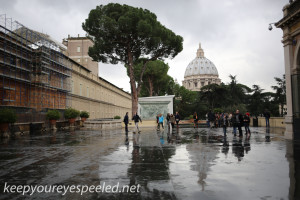 Here is a link to some more photographs from my visit to the vatican Museum. https://keepyoureyespeeled.net/rome-march-13th-to-20th-2013-election-and-installation-mass-of-pope-francis/nggallery/rome-2013/rome-vatican-museum-march-13-2013 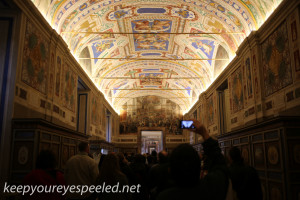 I checked into my room and was exhausted. I slept a few hours and nearly decided to sleep through to the next morning. Instead I dressed in my rain gear, it was still raining , and walked over to the Vatican to wait for the smoke quite sure it would again be black. 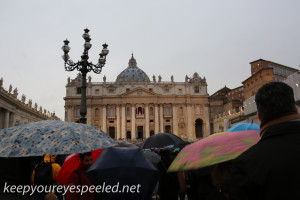 I arrived around 5:30 and stood in the cold rain until I believe around 7 p.m. I was now hungry again, tired, cold and wet and made the decision to head back to the hotel. 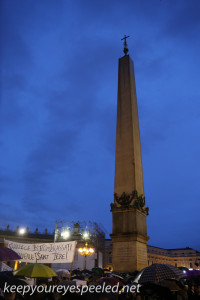 I was on my way back, and took this photograph of this fountain when there was a murmur and rustling in the crowd. Then there were shout in Italian. 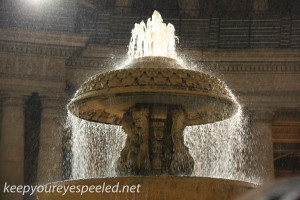 And my camera battery died as I rushed back to St. Peter’s!!! I changed the battery looked up an took this photograph of the white smoke!!! We had a new Pope!!! 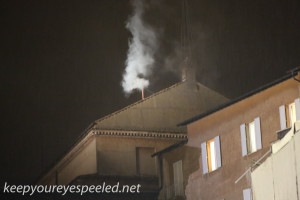 What an absolutely amazing experience. The bells rang and the crowds pushed forward, I was lucky to still be near the front as a million people from Rome now crowded into the square. And we waited anxiously for about an hour as the bells rang. 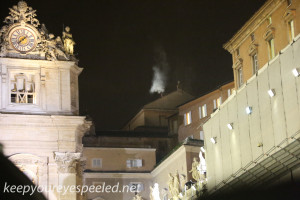 Every eye was fixed on the balcony and every movement caused a stir in the crowds.  And we waited in the cold and rain.   At some point  I found a priest who spoke English and he told me the  Pope took the name Francis. 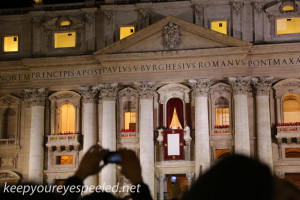 And finally the Pope appeared. I was blessed to be among the first people on this planet to see him in person as Pope Francis. I wasn’t able to understand his speech in Italian but the experience of being there will always give me goosebumps when I recall it. The sounds of the bells filled the cold night air and warmed the crowds after the new Pope left the balcony. We slowly filtered out into the dark streets of Rome knowing we had just experienced history being made. And he has, in my opinion been a wonderful Pope, concerned as I am on the destruction of this beautiful planet we call Earth. I can only hope the men of power heed his warnings. Here is a link to some more photographs of that historic night i was blessed to experience. https://keepyoureyespeeled.net/rome-march-13th-to-20th-2013-election-and-installation-mass-of-pope-francis/nggallery/rome-2013/rome-pope-francis-election-march-13-2013 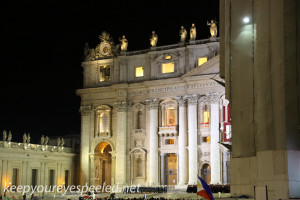 “The idea of infinite or unlimited growth, which proves so attractive to economists, financiers and experts in technology … is based on the lie that there is an infinite supply of the earth’s goods, and this leads to the planet being squeezed dry at every limit.”   Pope Francis