A Tale Of Two Very Different Walks In The Lehigh River Gorge.

November 18, 2018 / fskokoski@gmail.com / Comments Off on A Tale Of Two Very Different Walks In The Lehigh River Gorge.

A Tale Of Two Very Different Walks In The Lehigh River Gorge. 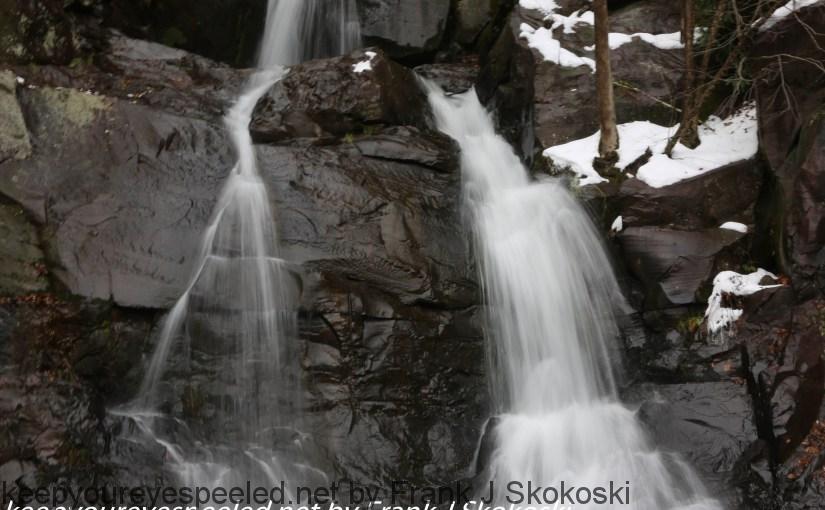 After hiking at PPL Wetlands near  the Susquehanna River last Saturday I decided to visit another  river near my home here in Northeastern Pennsylvania, the beautiful  Lehigh River at Rockport.

I am fortunate to live  on a mountain situated about 15 miles between these  two beautiful, but very different rivers. I have written many posts about both of them and you can read them by searching my blog archives. The Lehigh River is smaller, and swifter than the Susquehanna River, as it flows through a steep gorge it carved through the mountains.

The wide and well maintained D & L Trail  is now situated on the old railroad bed that follows the winding river from White Haven to Jim Thorpe. It was sunny and cold as I began by walk with temperatures in the 20’s.

I decided to walk north and east on the trail.  I soon came upon Buttermilk Falls which was gushing forth in full force from the recent rains.

It was a cold but pleasant Autumn day as I walked on the narrow trail that separates the walls of   steep gorge from the river below. There were signs that winter approached such as a few icicles clinging to the cliffs.

Fall arrived late this year and there were still many leaves on the beech and oak trees,

and scattered on the trail.

It was a quiet and peaceful walk. I only encountered a few hikers and bicyclists  for the first few miles.

There is not as much wildlife along this trail as I find on some of the other trails I hike. Last Saturday I only saw a few crows, some black-capped chickadees and Juncos. I forgot my camera and only had my iPhone so I couldn’t take any photographs of the birds.

As I neared Leslie Run I walked into a 20km run  taking place on the trail. The race began in  White Haven with the midway, and turn around point, situated on the trail  between Leslie Run and Mud Run.  I exchanged greetings and uttered encouragement to many of the participants.

It was about a 3 1/2 mile hike out to Leslie Run. I was tired so  I decided to walk back under the weak but pleasant November sun.  Here is a link to some more photographs from my hike.  Lehigh Gorge hike November 11 2018.

I returned to the Lehigh Gorge at Rockport yesterday and found a completely different world. The trail was now blanketed  in almost a eight inches of  snow!

Fall came late in our area but Winter arrived early with the heavy snowfall on Thursday. It was cloudy when I arrived at Rockport with temperatures in the mid 30’s just warm enough to cause the already wet snow to turn to a messy slush.

Walking in the wet snow wasn’t easy and I trudged along the trail in the same direction I did the week before. I again walked past  Buttermilk Falls and headed north and east on the trail.

I again only saw a few birds on my walk, some crows, black-capped chickadees some juncos or snow birds

and this brown creeper.

There were only  a few sets of human footprints in the snow and I soon learned they were made by a family of hunters who I soon passed  on the trail.

I also discovered there weren’t only humans walking along the Lehigh River. I found the tracks  of a  large bear  in the slushy snow.

It looked like the tracks of a very large male black bear.  I followed the tracks  until they  headed up the steep cliffs along side the trail.  The tracks showed that  the large bear crawled up this fallen tree. I was already out about a 1 1/2 in the snow and was too tired to crawl up after him. I am guessing he may have a den in the large rock formations above.

I   knew I wasn’t going to make it out to Leslie Run in the snow. Every step was like taking two or three steps and I was tired. So I started my walk back. On my way I noticed some witch hazel trees. These are the only Pennsylvania trees that blossom in the Fall.

I continued my return hike, enjoying the sounds of the roaring Lehigh River below. I will admit the snow does look pretty in the forest.  However,  I don’t enjoy walking in it anymore,  and I am counting the days until Spring.   I love the warm months but I won’t stop hiking in the Winter, regardless of how much snow or how cold it gets. There is so much to see, even in the Winter, and I don’t want to miss any of it. Here is a link to some more photographs from my hike in the snow. Lehigh Gorge hike November 17 2018.

A river is water is its loveliest form; rivers have life and sound and movement and infinity of variation, rivers are veins of the earth through which the lifeblood returns to the heart.   Roderick Haig-Brown