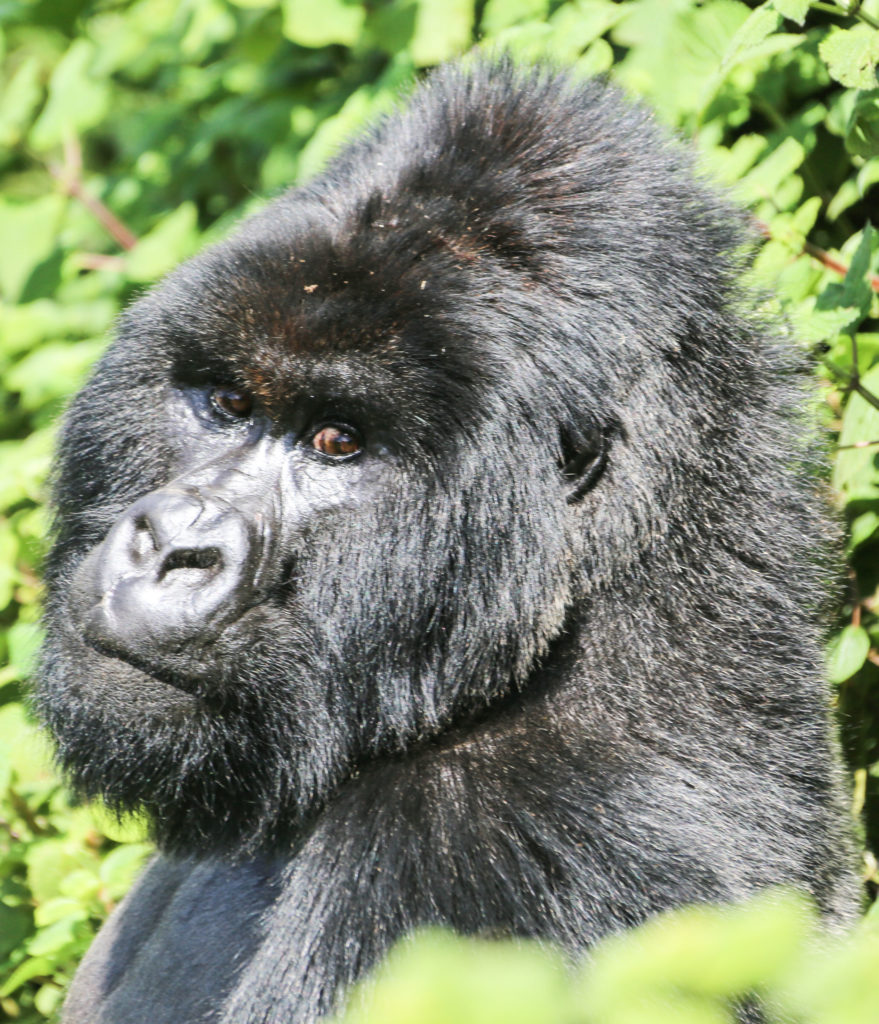 On the day of our gorilla trek, we had to be up early  for our  adventure but I got some much needed sleep   in the cozy, but chilly, cabin.  I awoke  excited with the hope of encountering   some of our   endangered cousins, the mountain gorillas found only in these forested  mountain areas of  Rwanda,  the Congo and Uganda. 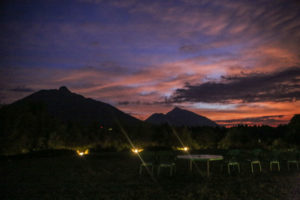 I ventured outside for a quick walk around the grounds of the lodge and enjoyed the dawning of the new day in the skies above the extinct volcanoes in the distance. 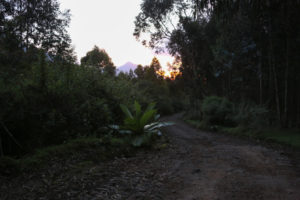 After an early breakfast, we drove to the  Volcano National Park’s administrative center where we had to obtain our gorilla trekking permits. Here is a link to some more photographs of my morning walk and our drive to the park. https://keepyoureyespeeled.net/africa-october-2016/nggallery/africa-october-2016/Rwanda-Volcano-National-Park-morning-walk-and-drive-October-13-2016 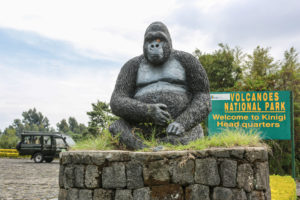 The park only allows  small groups of 8 to 10 people to visit each of  the 10 gorilla groups or families. So there is usually only a small crowd of about 80 to 100 individuals at the park each day. While we waited for our permits we were greeted. and entertained, by a local dance group. 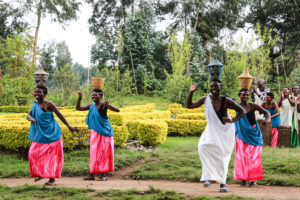 It was a wonderful experience watching these young individuals perform local dance with the majestic mountains in the background.  Here is a link to a video I upload on my Youtube channel. https://www.youtube.com/watch?v=rv746SoKDxI 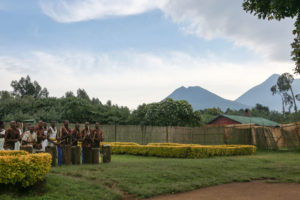 And here is another. There are a few more uploaded on my channel so feel free to have a look at these amazing performances. https://www.youtube.com/watch?v=jDnxSKquuyw 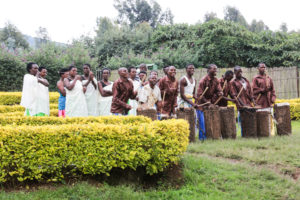 After a short wait we were assigned a gorilla group which depended on how difficult of a hike you wanted to take to see them.  We were given a “more difficult”  “easy” hike and were told we would look for  the Amahoro group, Amahoro means “peaceful” We were given a orientation on how to approach and interact  with the gorillas in the wild. Although accustomed to humans they are still wild animals and still very dangerous. We realized the danger when were were advised there would be armed rangers accompanying us on our hikes. 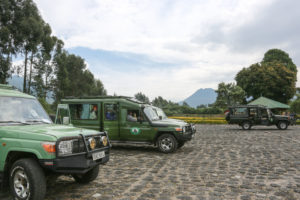 The groups of gorillas are wild and roam the vast mountain forest each day. So there is no guarantee that you will encounter  your group on a given day, but the rangers and guides are aware of where they are and the chances are pretty good. After a little delay due to some misplaced paperwork, we  drove through the crowded rural streets of rapidly growing  Ruhengeri and out into the more rural areas adjoining the National Park. 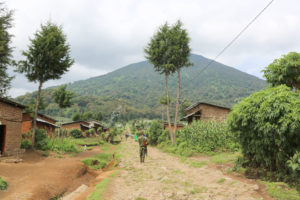 After a bumpy ride over these rural “roads” we arrived at our departure point and began our hike to find our group of gorillas. Little did we know our gorillas weren’t co-operating and didn’t stay in the area they were usually remained. Here is a link to some more photos of our visit to the park offices and drive to the departure point. https://keepyoureyespeeled.net/africa-october-2016/nggallery/africa-october-2016/Rwanda-Volcano-National-Park-October-13-2016 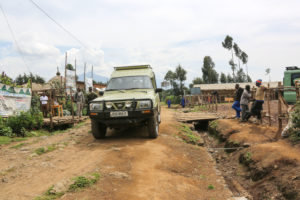 We  first hiked  up the rural “road” we drove in on.

We  continued our  walk on the edge  of fields planted with crops of potatoes and pyrethrum, a flower  used in insect repellants, and we we watched by the curious folks, mainly women and children, tending the fields or living in the few homes adjoining the park lands. 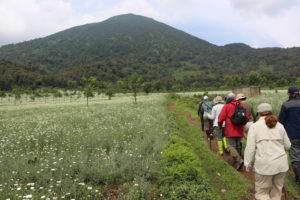 We soon crossed a rock fence with marked the beginning of the park lands and began our uphill hike through the thickly forested slopes of  Mt Bisoke, accompanied by our guide and armed rangers. 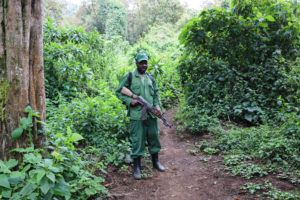 It wasn’t an “easy” hike as advertised and the uphill climb, under the hot African sun at an elevation over 9000 feet wasn’t an easy one. We were able to hire porters to assist us with our backpacks, cameras and other items. I hired one for the very reasonable rate of $10 dollars but only had him carry my walking stick, which I never use. 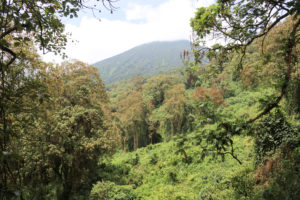 The upward hike first took us under some larger trees on the lower slopes.  It is hard to imagine but there are still buffalo and elephants roaming these narrow forested paths as evidenced by some of their droppings we found. 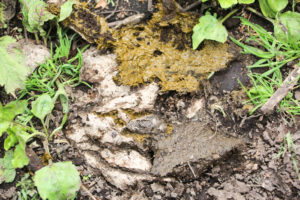 We also found the largest worms I have ever seen.

The forest gave way to more brush and  smaller vegetation including nettles which left a nasty burning sting if even touched ever so slightly. 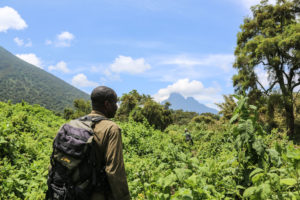 The guides seemed to be having a problem locating our gorilla group and we learned they had moved higher up the slopes of the mountain. which of course meant we had to hike up higher too. It was a strenuous hike, I will admit, even for me, and I am in fairly good shape form a lot of hiking. It was harder on on some of the other members of our group and I will admit I was getting tired and anxious as we continued our hike in the high elevation and through the increasingly thicker brush and nettles.  It wasn’t easy folks but the views were spectacular. But we didn’t come 9000 to see the views and we were all hoping we would see the gorillas. 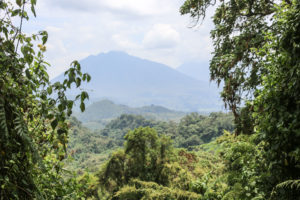 We were all exhausted, and our guide was pushing us on, when I was a little ahead of the group with the lead guide, I heard the first grunt of a wild gorilla. It was amazing and I knew we would finally see one. I signaled down to the rest of the group and the excitement quickly gave us all a new strength., 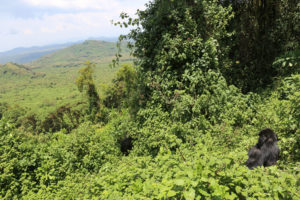 We were on the side of a steep slope, thankfully, now overgrown with wild celery and not the pesky nettles. We soon learned this is why the gorillas were here, it is one of their favorite foods, and soon we saw a huge silverback male gorilla lead his group down the slope and right into our group of humans. An absolutely amazing encounter, one which forever will  live in my memory. 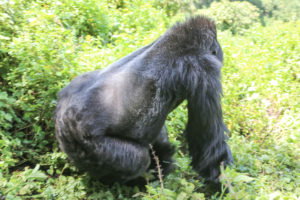 What occurred over the next hour  was almost surreal. Our small  group of humans was able to observe, and somewhat interact, mainly by getting in their way as the foraged for food, with a group of gorillas on a steep, heavily vegetated slope in Africa. Truly amazing. 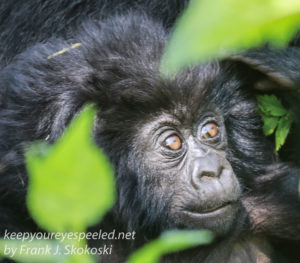 Obviously these gorillas had seen humans before and were accustomed to us. It seemed they trusted our guides, who were making reassuring sounds, grunts  and noises familiar  to the gorillas, and particularly this fellow, the huge silverback who supervised and protected the group. 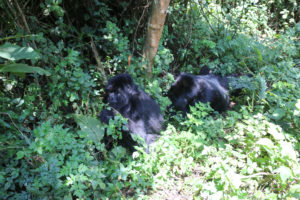 The silverback  and his group seemed unconcerned, or even annoyed with our group of smaller primates and went about ripping up the large plants and  wild celery and eating the goodness inside the shoots and stalks.  It isn’t all peaceful in the gorilla world and you can see the wound our silverback had on it;s head from a fight with a rival silverback. . Here is a link to video of some of these  beautiful creatures I uploaded to my Youtube channel.  https://youtu.be/BfhDWeVyfGE The mothers cuddled their very young, but allowed their older juveniles to roam freely with the adults of the group, almost oblivious to our presence. Here is another link to a video I uploaded to Youtube. https://youtu.be/48-8Su12am4 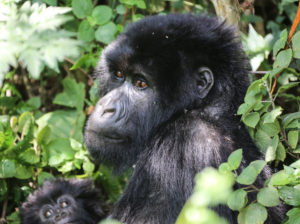 We were on the side of a steep slope, which was actually slippery because of the wild clery that grew there and was what attracted the gorillas up here. They scampered in the thick vegetation, appearing out of nowhere in front of, behind and beside us.  Some even tumblesetted their way down the slope. It wasn’t the best location  for photography but the interaction here, on this heavily vegetated and isolated slope, with these wild creatures, could not have been better anywhere else.  Here is one more video of our close encounter of the gorilla kind. https://youtu.be/LFeRxC0739E 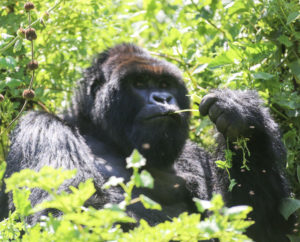 We only were allowed one hour visiting with the gorilla group so as not to cause too much stress in their lives. and the hour went by so quickly. None of us wanted to leave our new friends but it was for the best. Our intrusion in their group is not natural but, the fees generated, it cost $750 per person for a permit, are used to protect this critically endangered species. There are only about 900 gorillas living in these mountains and they are found nowere else on our planet. Truly we were fortunate to see this closely related primates in their  home. Here is a link to some more photographs of the mountain gorillas we encountered. https://keepyoureyespeeled.net/africa-october-2016/nggallery/africa-october-2016/Rwanda-Volcano-National-Park-Gorillas-October-13-2016- 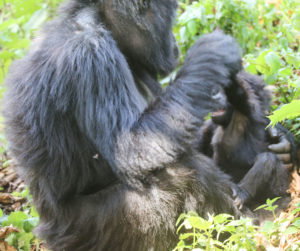 It was a long walk back, but at least most of it was now downhill and we had our wonderful experiences to keep our mind off the exhausting hike. We were out on our trek much longer than expected and didn’t return to our lodge until late in the afternoon. We missed the afternoon activities but we all agreed it was  absolutely worth it. 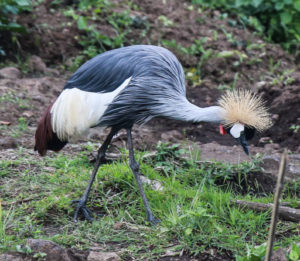 I spent the remainder of the afternoon enjoying the beautiful scenery and birds living in the woodlands near  the lodge. We later had a nice dinner were we shared stories of out encounters with the gorillas. I retired early after dinner, falling asleep while recalling my  wonderful experiences of the days,  wishing I could remain do it again, but also, looking forward to the next part of my African adventure. 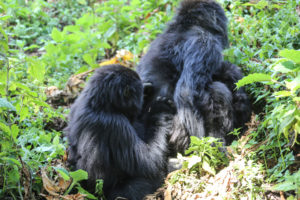 I feel more comfortable with gorillas than people. I can anticipate what a gorilla’s going to do, and they’re purely motivated.  Dian Fossey