January 7, 2023 / fskokoski@gmail.com / Comments Off on An Icy Hike Along The Beaver Creek In The Penrose Swamp Barrens In Carbon County 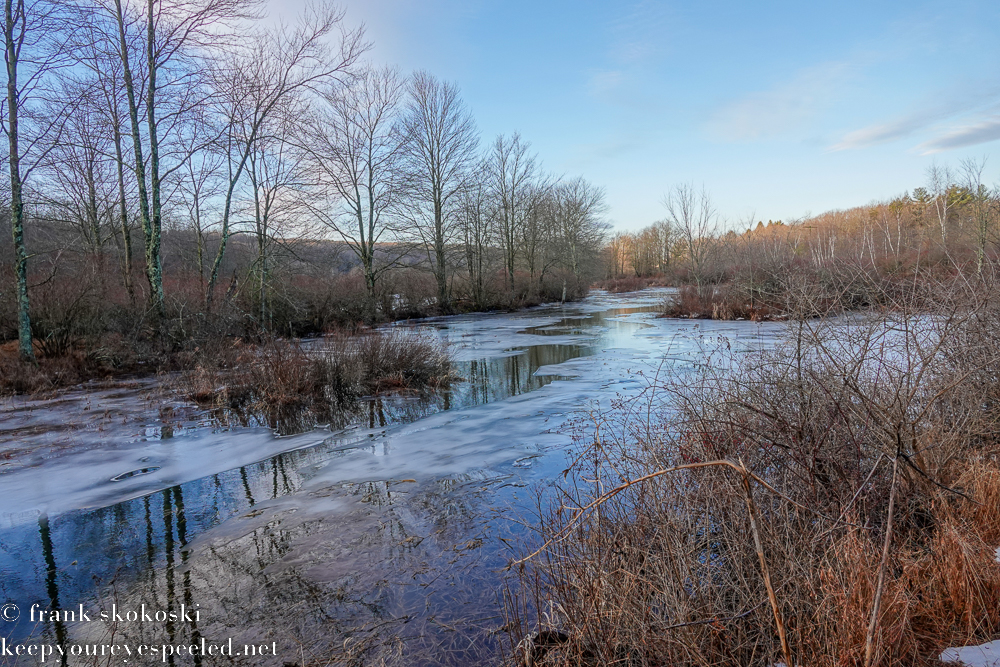 The mild Winter weather continued here in Northeastern Pennsylvania on New Years Day. I awoke to clear skies and temperatures in the low 40’s. After my morning walk in my neighborhood I drove to historic Beaver Meadows where I decided to continue my exploration of the Penrose Swamp Barrens. This 2700 acre tract of land, located primarily in Carbon County, was recently acquired by the Pennsylvania Bureau of Forestry  and is now part of the Weiser State Forest. 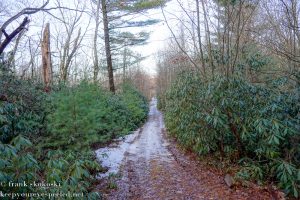 In addition to the  large pitch pine,  hemlock and hardwood forest, the wetlands and pristine barrens the Penrose Swamp  Barrens also are the location of a lot of local history.  Coal was discovered in Beaver Meadows in the early 19th century. One of the first steam operated railroads in the  Nation,  the Beaver Meadows Railroad , was built here in the 1830’s to transport the coal to the Lehigh and Delaware rivers and the markets in New York and Philadelphia. ( And, according to one account, it was the “most successful” railroad in the State.  https://www.newspapers.com/clip/6778208/1925-history-of-lv-beaver-meadows/) 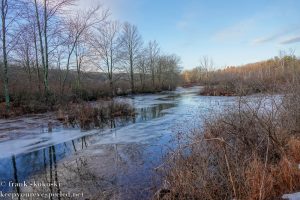 The trail took me to the local sewage treatment plant and a lot of frozen ponds and wetlands.   I headed east and south trying to find what looked like a trail on Goggle maps.  I navigated the icy trails, following the footprints,  probably  of  hunters, on the trail. 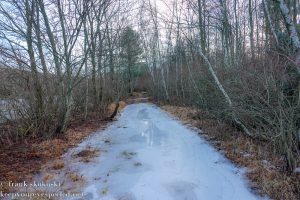 I walked past this board along the trail , wondering why it was placed  there. 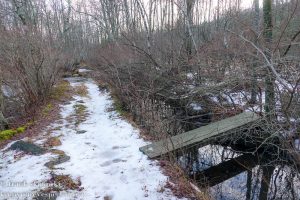 I soon learned the reason when the trail I followed ended at the edge of the flooded Beaver Creek. I walked back, crossed the board, and followed the footprints along the banks of the creek. 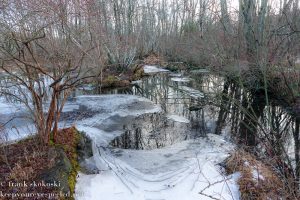 I saw these old ruins across the creek and, carefully made my way across the creek, to investigate. They appeared to be the remains of an old bridge across the Beaver Creek. I reflected on the men who may have built it almost 200 years ago. 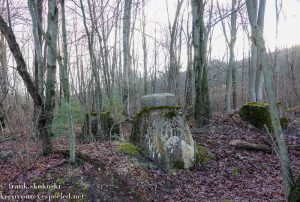 I  returned to the other side of the creek and continued my hike. It wasn’t easy walking. . The recent rains flooded the trail, and the waters  froze in the sub-zero arctic weather we had last weekend. This  turned  the trail into a frozen pond. 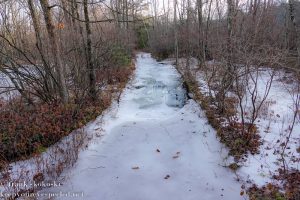 I carefully made my way on the icy trail. There were  many ponds and wetlands  along the trail. They looked like a great place to observe wildlife in the warmer months. I did not see any wildlife on the ponds on my  New Year’s Day hike. The trail eventually became less icy. It was still snow-covered but it was not as difficult  walking. 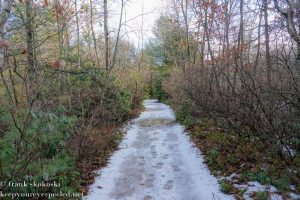 Fan clubmoss  grew all along the trail, 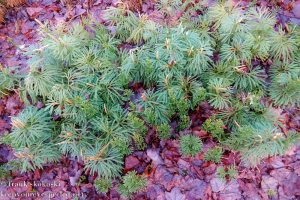 as did many patches of  teaberries. Most of their leaves were still green. 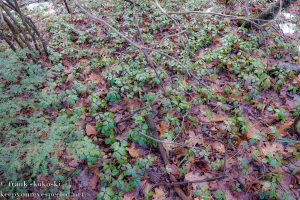 There was less snow as I continued on the trail which was now further from the Beaver Creek. Pitch pine, mountain laurel, and rhododendron grew along the trail. 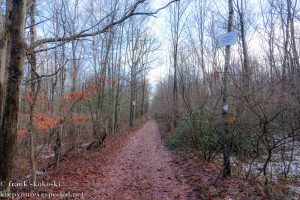 The sun now slowly disappeared behind a mountain to the south. 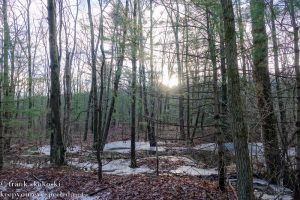 After about a mile of hiking I realized I was not in the Penrose  Swamp Barrens.

I  saw  signs posted along the trail  welcoming me to the State Forest.

I did  not see any   “no trespassing” signs on the trail  on my mile walk. And there were many footprints in the snow and ice.  I believe the lands  I was hiking on were  owned by the local sewer or water utility company and were  open to the public.

In any event  I was now on State Forest land acquired in the Penrose Swamp Barrens  purchase. The trail continued and widened. One could now see the black coal slag that was used as fill for the old railroad right of ways in the 19th century. I now knew this was the remains of the old Beaver Meadows railroad right of way.

The trail soon became flooded  by a small creek that flowed onto the right of way. 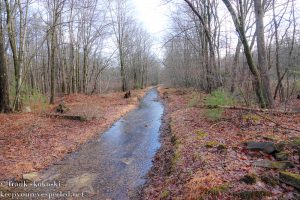 The stream eventually flowed  off of the trail after about a 1/2 mile. 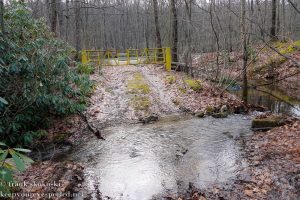 The trail now became icy again as it descended under some older hemlock and pitch pine trees. 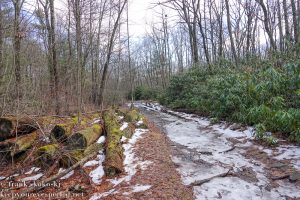 More rhododendrons grew along the trail. 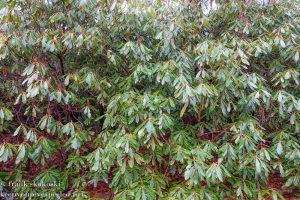 The trail again approached the Beaver Creek, which had now grown from the many small streams flowing into it.  And here my hike ended. The trail was blocked by the waters of the fast flowing creek. 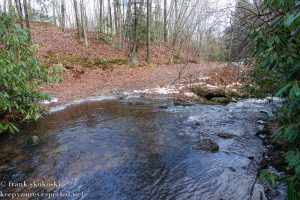 There was once a bridge here as I discovered some of the old foundations.  I did some research and fund this detailed map showing the bride over the creek that existed in the mid 19th century. https://digital.libraries.psu.edu/digital/collection/pageol/id/42662/

I had hoped to hike down to the Penrose Reservoir but had to turn back. 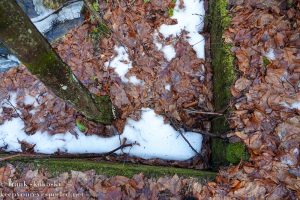 The sun now rose above the mountains and it was a nice early Winter walk back to my Jeep. 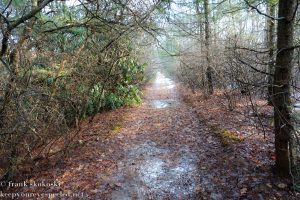 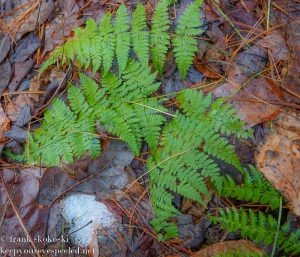 common hairmoss contrasting the brown and whites of the trail. 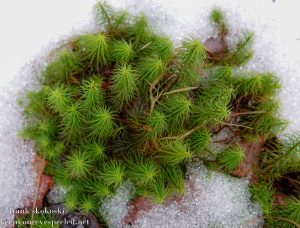 I also found a few mushrooms, these birch polypore  mushrooms and 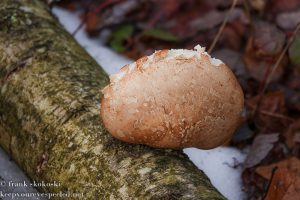 these interesting fungi, a species of earth star, I believe it is a calostoma lutescens  or lattice puffball. 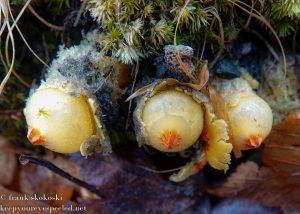 I walked back to the ponds near the sewage treatment plant, 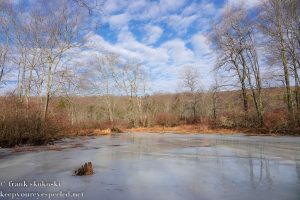 and here saw my first wildlife on my five mile hike. A heard of deer, 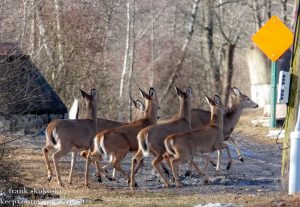 and quickly fled as I approached. Well at least I saw some critters on my hike. Viewing wildlife and finding mushrooms and cool plants has been one of the main reasons for my love of our Pennsylvania woodlands since I was a child. ( The other is I just like being in the peace and quiet of our forest. I usually like to hike alone, unless I can find a kindred soul  (female) who loves to explore Nature as much as I do. I  haven’t found this too often in my lifetime.  But like Neil Young, I’m  still searching for that heart of gold.  Okay sorry I digress into my personal life, although it is my blog, so I guess I can).

In any event it was another nice hike and I learned a little more about the Penrose Swamp Barrens. I will be doing a lot exploring on this 2700 tract of land in the future. And hope to share some of the natural beauty I find here on my blog.  Here is a link to a gallery with some more photos from my hike. Beaver Creek Penrose January 1 2023. 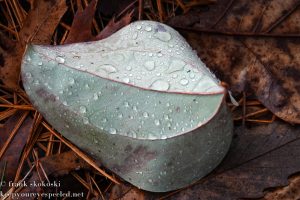 “Little January
Tapped at my door today.
And said, “Put on your winter wraps,
And come outdoors to play.”
Little January
Is always full of fun;
Until the set of sun.
Little January
Will stay a month with me
And we will have such jolly times –
Just come along and see.”
–  Winifred C. Marshall,