Birds And Bears In The Gamelands Of Dennison Township

May 21, 2019 / fskokoski@gmail.com / Comments Off on Birds And Bears In The Gamelands Of Dennison Township

Birds And Bears In The Gamelands Of Dennison Township 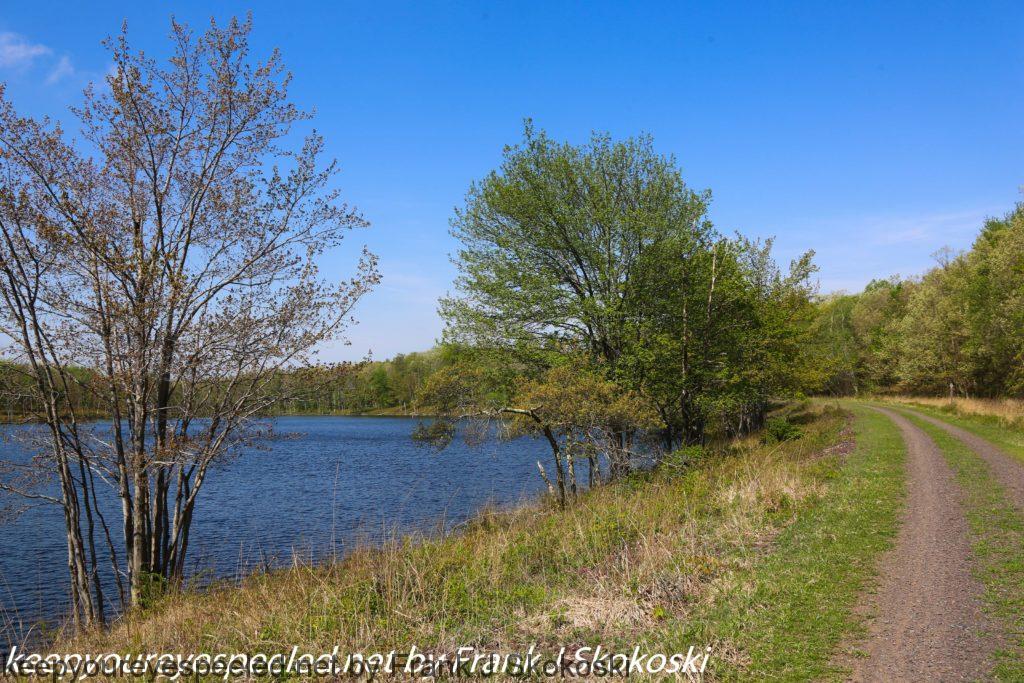 Cloudy skies greeted me when I woke up Sunday morning at my home in Northeastern Pennsylvania . I took my usual morning walk in my neighborhood. in Hazle Township.  I enjoyed he mild summer-like temperatures, the Spring flowers and the singing of the birds. After my walk, and a cup of coffee I decided to drive to the State Gamelands in Dennison Township. 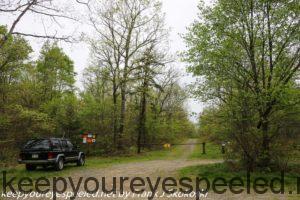 Gamelands 119 are located in Dennison Township. The road to the parking lot is not paved  and a four-wheel drive vehicle is a must to get there. I like  the rough ride through the dense second-growth forest. The gamelands are about 1600 feet above sea level. This is  almost 1100 feet higher in elevation than the PPL Wetlands. The effect of the higher elevation can be seen in the vegetation. The trees and flowers are about two weeks behind  in growth than the vegetation at the lower and warmer wetlands. 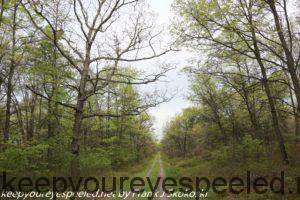 I thought that i might see migratory birds on these  ridges of  foothills of the Pocono mountains. And I did.. Shortly after the start of my walk I saw this oven birds scampering in the scrub oaks along the trail. 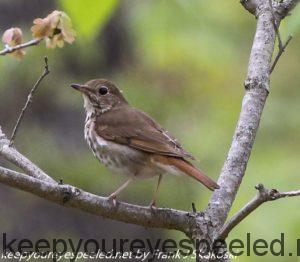 The trail passed through a second-growth mixed forest of oak, maple and pine trees. It was the home of many birds  and i could hear their songs in the forest. Unfortunately, they thick forest made them difficult to photograph. I was able to get this photo of this American redstart. 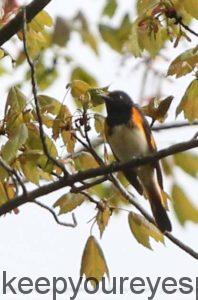 And there were plenty of the tiny warblers fluttering in the underbrush. 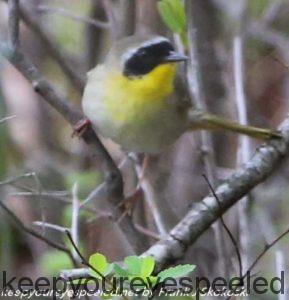 The wide trail was easy to walk on. along its edges were many wild violets. 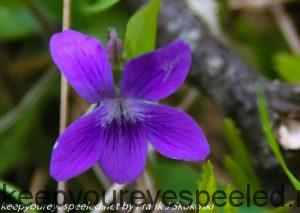 As well as  low bush blueberries  in full bloom. I have to remember to come back next month to enjoy their delicious fruit. 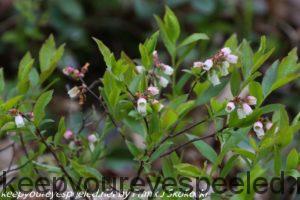 The main trail into the gamelands soon intersected with an old railroad right of way. The  sun broke through the clouds and it remained sunny for the rest of my hike.   I followed the trail   through a wetland where ferns, scrub oaks trees and   high-bush blueberries were abundant. 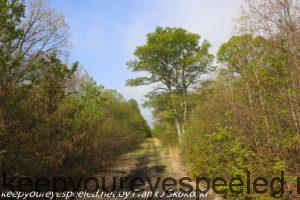 Once again I heard the songs of many birds along trail. I was able to photograph a few, including this one, I believe a white-eyed vireo. 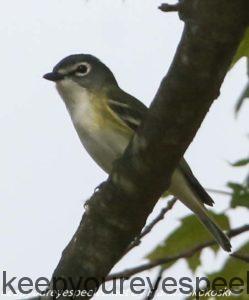 I have never seen one before. It was a pretty bird. 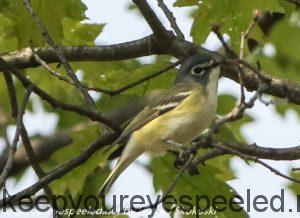 I also saw this one, I believe a magnolia warbler, singing in a tree. 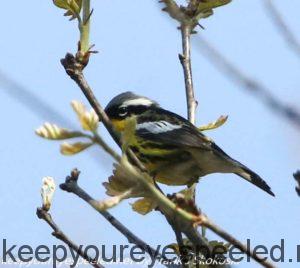 It was shortly after I saw this bird that I had my first encounter with  bear. And it  was a close one. As I was slowly walking along the trail, a large male black bear walked out right in front of me! He was about five feet away. 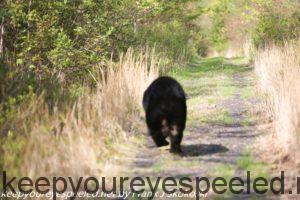 Time froze for a few seconds as we glanced at each other. He reacted before me, thankfully, grunting and running into the woods.  This was the closest i came to a wild bear in the woods. I knew how close to danger i was. I will admit i was a bit shaken. 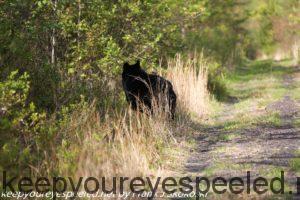 After my close encounter with the bear I continued my hike on the trail crossing one of the streams that form the headwaters of the Nescopeck Creek. It was so peaceful out in this remote area. 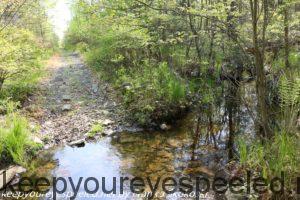 It wasn’t quiet. The song of the birds filled the wetlands along the creek now flowing along the trail. This one, a male rufous -sided towhee, was perched in a tree. 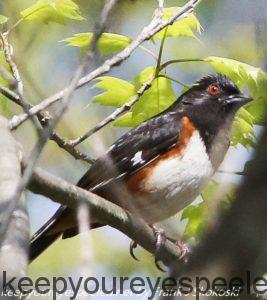 It sat perched in the tree and went about singing it’s song while I watched. 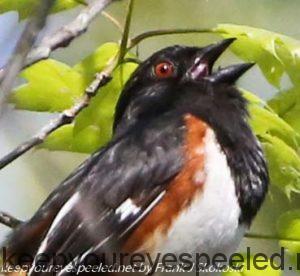 More evidence of the elevation  I was at could be found in these honeysuckle azalea blossoms. They were not yet open while at the PPl Wetlands they were almost finished blooming. 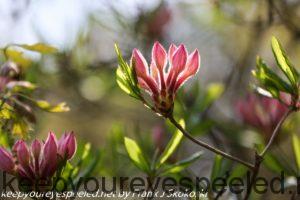 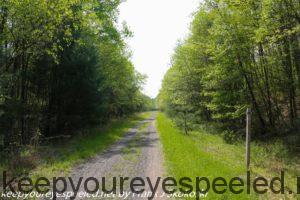 I followed it up to scenic Moosehead lake where I stopped to a rest and watched this female rose breasted grosbeak. 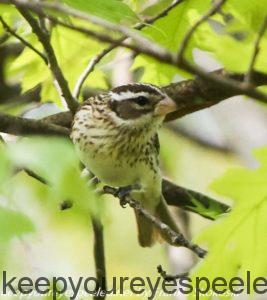 I also saw this Canada goose family on the lake.. It was unusual to see only two goslings. I think the family may have been attacked by a fox, coyote or some other predator. 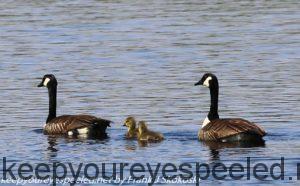 Walking a short distance past the lake I came to another large wetland area. There is a large beaver lodge in the middle but I didn’t nay beaver activity. 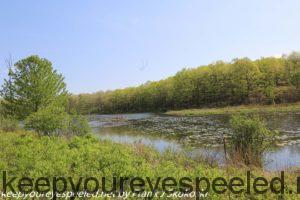 I was out about 3 1/2 miles now and decided to head back. On my way few more bird, including this cedar waxwing. As the sun warmed it up, temperatures rose into the 80’s, the  bird activity slowed down. Here is a link to more photographs of the birds I saw on my hike. State Gamelands 119 birds may 20 2019. 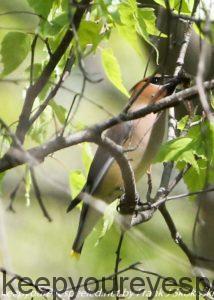 It was a nice walk back. I came to the area where I had my close encounter with the large black bear. I proceeded cautiously. No big male bear but I saw a cub in the woods on the left side of the trail. I stopped. I heard a rustling on the right side of the trail. It had to be mom. I backed up, stopped and started clapping loudly. I waited 10 minutes and started to walk on the narrow trail. About 100 yards up the trail I heard a rustling and saw this bear, I believe it was mommy bear, running up the trail. Another close encounter with a bear. It was my lucky day. i love to see this magnificent animals in their natural environment.  I hope to see them again when I hike this area. 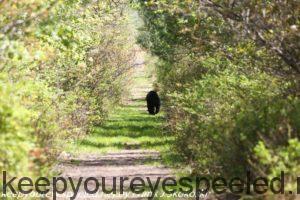 It was another great day in May in Northeastern Pennsylvania. I was glad i was able to get out and enjoy it, and to share it with all my blog followers. Thanks for coming along. Here is a link to some more photographs from my hike. State Gamelands 119 May 20 2019. 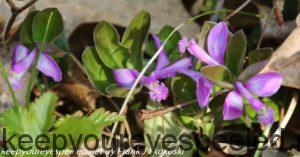 Every creature is better alive than dead, men and moose and pine trees, and he who understands it aright will rather preserve its life than destroy it. ~Henry David Thoreau 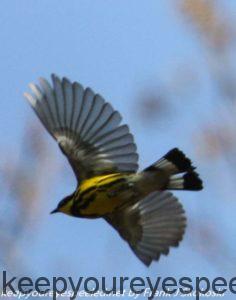