Exploring The Scenic And Historic Lehigh Canal In Walnutport.

April 13, 2020 / fskokoski@gmail.com / Comments Off on Exploring The Scenic And Historic Lehigh Canal In Walnutport.

Exploring The Scenic And Historic Lehigh Canal In Walnutport. 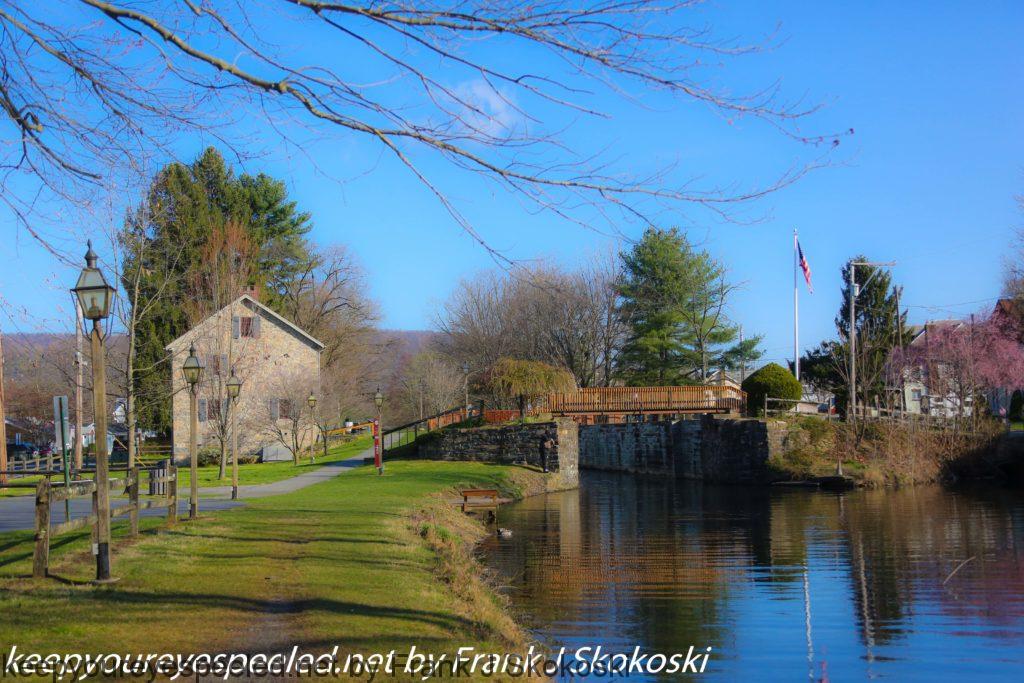 Some  of you who follow my blog may be familiar with the historic  Lehigh Canal from my hikes along this  abandoned waterway  in Weissport.  Constructed  in the early 19th century it played a large role in the Industrial Revolution here in the United States. 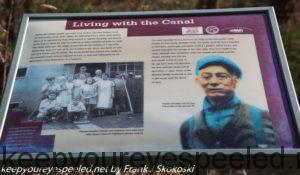 It was built  to transport coal in the canal along the Lehigh River  from the anthracite mining regions of Northeastern Pennsylvania to the markets in Philadelphia and New York.  At one time the canal began in White Haven and ended in Easton along the Delaware River. The development of the steam engine and railroads drastically reduced its usefulness but it still operated on a limited basis until the 1930’s. I have posted a few blogs on the history of the canal and they can be found in my blog archives  by using the search  tool on my website. 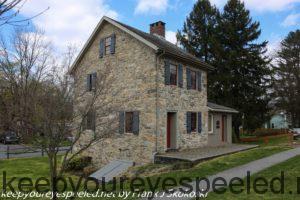 A week ago I made my first visit to the Lehigh Canal in Walnutport, Northampton County. In addition to the history, a walk along the canal  is scenic and provides a lot of opportunity to enjoy nature and observe wildlife. So I returned to Walnutport early Saturday morning to  hike on the southern leg of the canal trail. 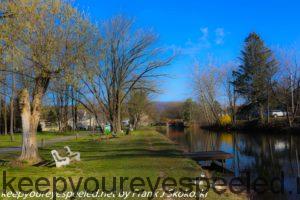 It was clear and cold when I arrived. Temperatures were in the upper 30’s with a light wind. However, the forecast called for the wind to die down, sunny skies and warmer temperatures. Relying on the forecast I wore shorts and a hoodie as I began my hike. It was cold but the sun was warming it up as I walked along the waters of the old canal. It was a pretty walk too, passing the historic , well maintained caretakers home, shown above. 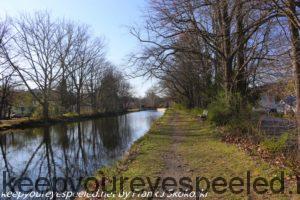 Ancient oak trees grew along the banks of the canal. . While the oaks were leafless,  the red maples and ornamental trees were putting forth buds and new leaves. 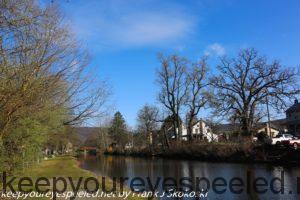 About a half mile down the trail I saw the stones and concrete remains of an old railroad bridge that once spanned the Lehigh  river. Always interested in local history I was anxious to read the historical marker which told the story of the large structure that abutted the trail. 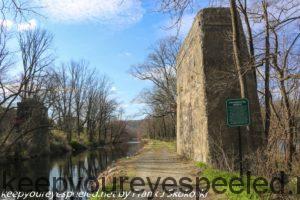 The Poughkeepsie Bridge was built in 1889 as part of a railroad line  that ran from Boston to Harrisburg. As it often does, my mind  began to imagine the tracks, trains and folks riding them, what they were thinking, why they were traveling in those days the train first began to operate. And also what the local folk were doing and thinking as the trains passed through their small town. 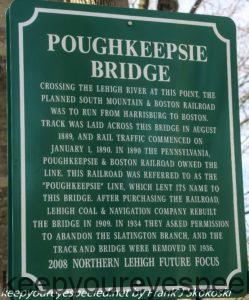 As I said a lot of history and scenery on this trail . But not so much wildlife, yet.  Just a few robins and sparrows. 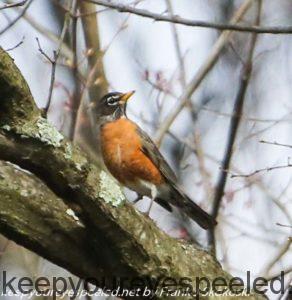 There were also  a few early morning  walkers and fishermen on the trail. I continued and came to one of the original locks on the canal 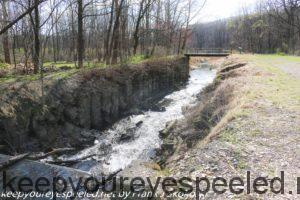 . Once  I walked past this lock  the waters of the canal flowed into a wetland and the trail became more wooded and  isolated. 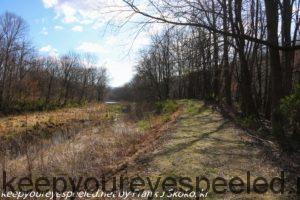 In the wetlands I observed   quite a few mallard ducks swimming on the  creek flowing from the canal  and small ponds  that it created.   Their were a lot more males than females. 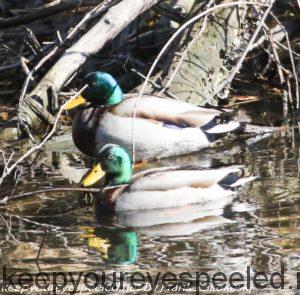 And while the males swam alone or in small groups the females were always escorted by a male. 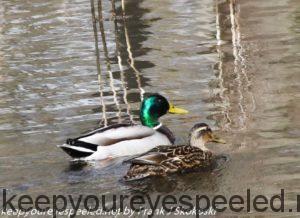 There were also some Canada geese on the ponds and once again I saw wood ducks and kingfishers.  As usual I  wasn’t able to get any photographs of any of these elusive birds. However,  I was able to photograph a couple of  these  pretty birds that have returned to our area. 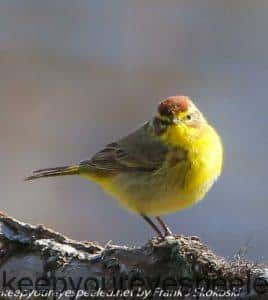 The palm warbler migrate through our area on their way to their breeding territory in the forest of northern Canada.  They winter in Florida and the West Indies. A pleasant sign that Spring has returned. 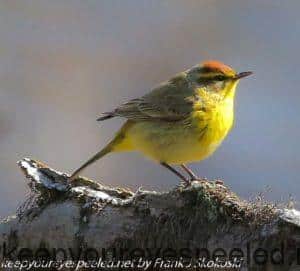 Other signs of advancing  Spring were the skunk cabbages growing in the wetlands, 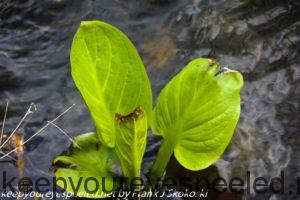 the leaves on blackberry canes and 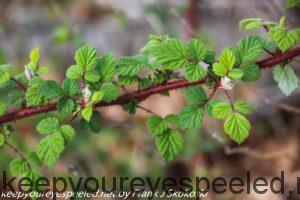 one of my favorite the trout lilies. Unlike on the northern trail there were thousands of them along this side of the trail. Unfortunately, because of the cold night and early morning hour they weren’t open yet. 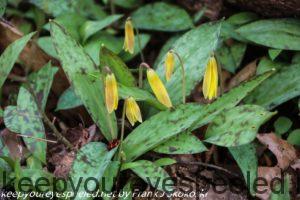 I came to the end of the trail and, as I began my return, the wind picked up, clouds moved in and , without the warm April sunshine, it felt much colder. And I wasn’t dressed for it. I was about 2 1/2 miles from my car and it was a long, cold walk back. The weather forecast, not for the first time, sure was wrong. 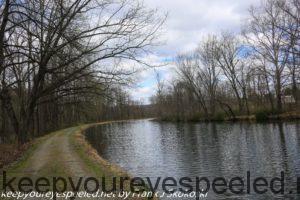 The wind and cold kept any frogs or turtles from appearing in the wetland and the only other wildlife I saw on my return hike were some cardinals, 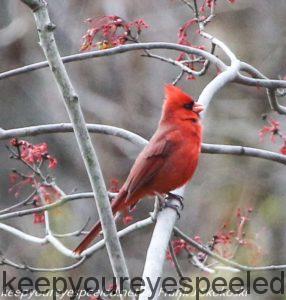 cowbirds high in a treetop, 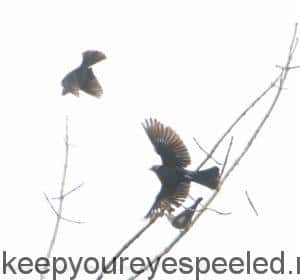 and a couple of tufted titmice.  Here is a link to some more of the birds I saw on my hike on the  Lehigh canal. Walnutport canal hike. April 11 2020. 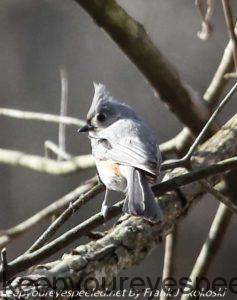 The clouds dissipated, the winds subsided and the sun appeared, just as I was finishing my five-mile hike. Despite the cold weather, it was still a nice hike and I hope to return on a more Spring-like day. I am sure there is a lot more to discover in this quaint little town and along these hiking trail. Here is a link to a gallery on my website with more photographs from my hike on the canal. Walnutport canal hike April 11 2020. 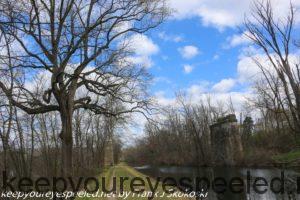 The most beautiful gift of nature is that it gives one pleasure to look around and try to comprehend what we see. Albert Einstein 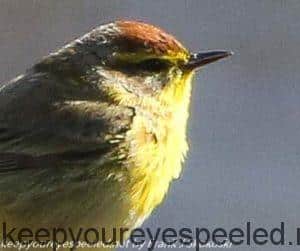