May 17, 2020 / fskokoski@gmail.com / Comments Off on Finally, Escape, A Weekend Adventure In Bald Eagle State Park 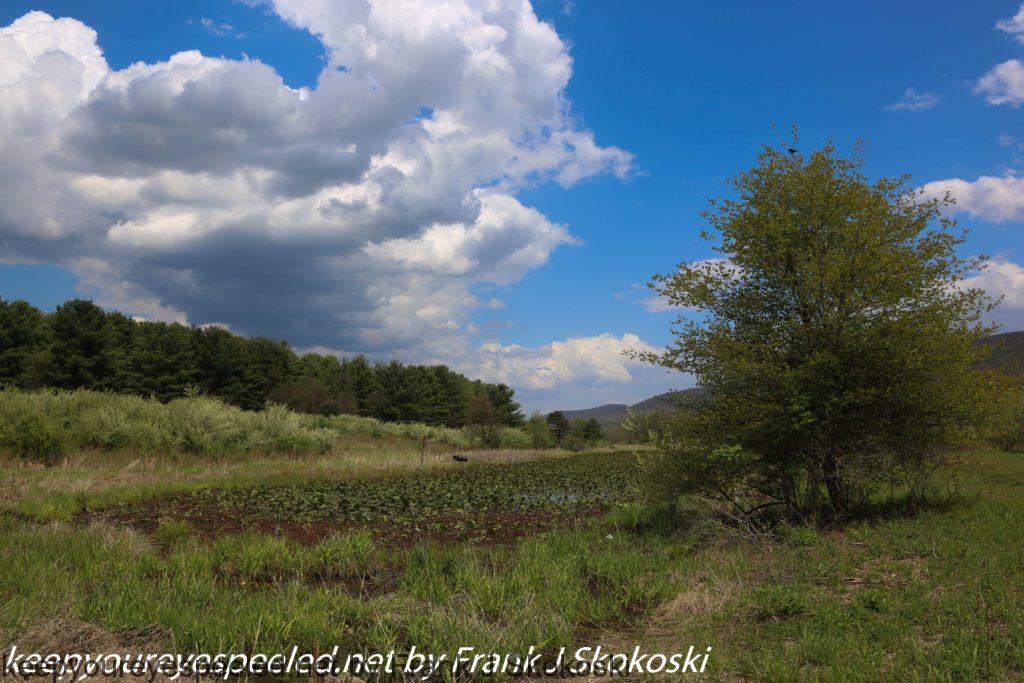 Here in Pennsylvania we have been living under corona virus restrictions for almost six weeks. Businesses closed and curfews and quarantines were put in effect. Not good for a gypsy and nomad like me. Some of the restrictions were  lifted in the counties of  Central Pennsylvania this past week.  Inns and hotels, with social distancing, required masks and other restrictions, were allowed to open. So, needing to get away,  I decided to take a two hour drive from my home  and explore the Bald  Eagle State  Park in Centre County. 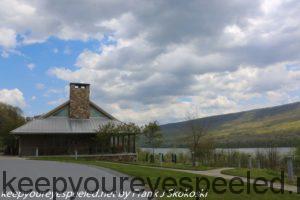 Located near the meeting of the Allegheny Plateau and the Ridge and Valley regions of Pennsylvania it is recommended by the Audubon Society as a excellent place for birding. I had read about it but never had the opportunity to visit. Friday  was our first really warm day of the Spring here in Pennsylvania.  Temperatures were near 80 degrees when I arrived  at the Nature Inn, located in the middle of the park,  where I booked a room for the night. 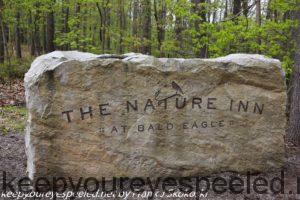 What a terrific location. The Nature Inn is situated atop a ridge overlooking the Foster Joseph Sayers Reservoir and across from Bald Eagle Mountain. What spectacular views. Since I arrived early, around 12;30 p.m.  , check-in was a three,  I wasted no time in heading out and exploring the trails.  I first found the Skyline Drive Trail and followed it along the ridge where the Inn is situated. . The first thing I noticed was how  more far advanced  Spring was here then at my home in Hazle Township.  Most of the trees had a full  growth of leaves.  Bright and green they were reflecting in the afternoon sunshine. 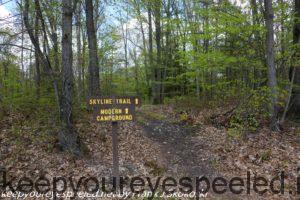 The dogwood trees were also in full bloom. 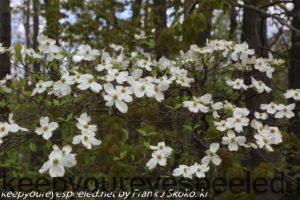 Large cumulus clouds floated in the deep blue sky overhead as I walked along the trail. Adding to the feeling of Spring was the aroma from the many honeysuckle bushes that were in bloom in the surrounding woodlands. The smell of these blossoms is heavenly. They should be planted everywhere. 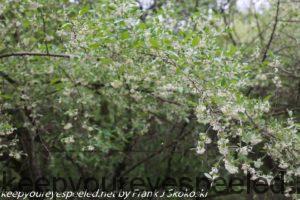 I heard the song of  birds  in the tree tops and shrubs along the trail. However they were not very active, probably because of  the afternoon heat. I did see this little fellow and, which  I think it is a phoebe. but  could also be an eastern wood  peewee 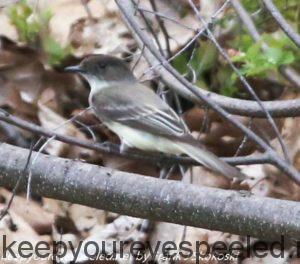 There were  few eastern towhees scampering in the underbrush or singing from a tree branch. 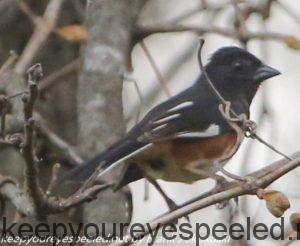 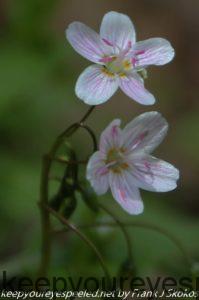 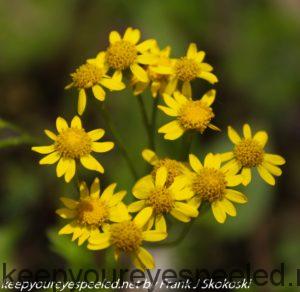 I followed the trail down to this bridge near the shore of the northern side of the reservoir. 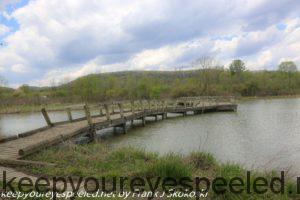 Beautiful views of the lake there were. 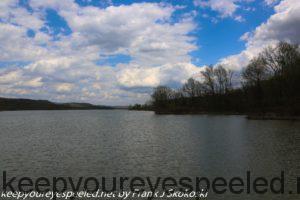 I hiked back up to the Skyline Drive trail and where it now became a mixed hemlock and beech forest. 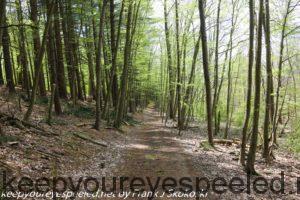 Again I heard quite a few birds in the treetops but they weren’t moving. I did see this downy woodpecker and a couple of vireos. 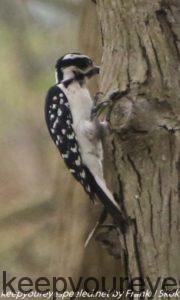 This red squirrel was perched on a tree branch and watching me walk past. 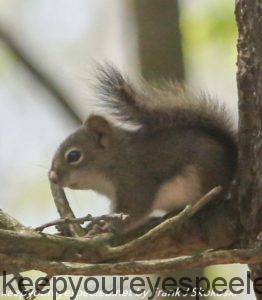 The afternoon sunshine filtered through the new leaves making for an almost magical walk, as many Spring walks are. 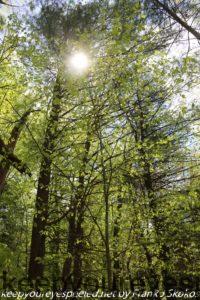 The trail left the woodlands at the top of the ridge and followed the Butterfly Trail downwards through some open woodlands. 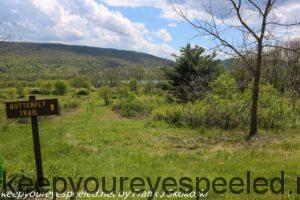 The trail was created over the right of ways of sewer and water lines. The new growth of wildflowers, shrubs and trees   makes a perfect habitat for butterflies and song birds. Unfortunately I didn’t see many of either on this on Friday  too early for the butterflies and too  hot for the birds and other wildlife. . The temperature had now reached 85 degrees. 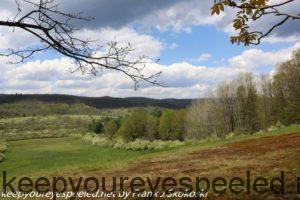 I found some shade underneath this tree next to a lily pad covered wetland named the frog pond. 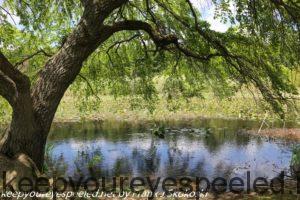 As I  sat here and rested I was joined by a male red-winged blackbird. 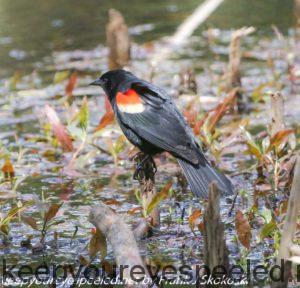 He didn’t seem to mind my company at all as he dipped his head in the water either for a drink or to just get cool. 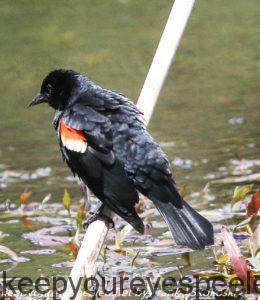 The brilliant red wings for which they are named were apparent at his close range. 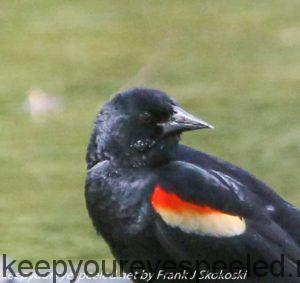 The male was soon joined by the cries of a noisy female . 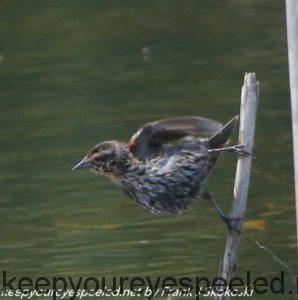 After my short rest I continued past the pond spooking  a few green herons. I also saw a Baltimore oriole feeding on some flowers high in a treetop. 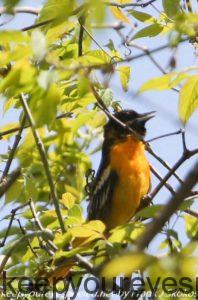 The trail looked like a perfect place to see song birds but I feel the afternoon heat may have curtailed their activity. I  did see a few yellow warblers in the shrubs. 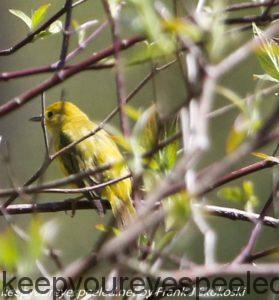 As I walked back toward the Nature Inn on the Butterfly Trail the skies became cloudy and  I remembered the warnings of afternoon thunderstorms.  I hastened my pace and followed the trail back to the Inn. It was around 3;30 when I arrived and my room was ready. 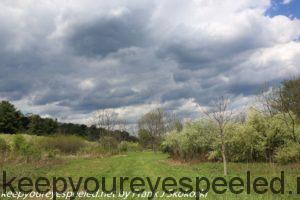 As I was  checking-in I made a change of plans . I had planned to stay only one nigh. However, my four mile hike  on the trails, the spectacular views and these lovely Inn made me decide to stay a second night.  I am going to love Bald Eagle State Park .  The rooms at the Inn were perfect, with a balcony  view of the lake and mountains. I didn’t stay in it long. The skies partially cleared again so I spent an hour walking the grounds and looking for birds, like this  red-bellied woodpecker. Still the afternoon heat was not the ideal birding conditions. 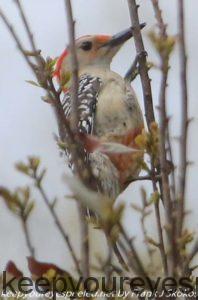 It was now  after 6 p.m. and I was hungry. There was a problem. Under the corona virus settings, sit down restaurants were  not allowed to open. And the Inn was not serving  dinner.  However, thanks to the folks at the front desk, problem solved. I  was able to have a nice Italian dinner delivered to my room from Brothers pizza located in a nearby town. It was good and there was a lot of it.  I am having the other half   for dinner tonight. 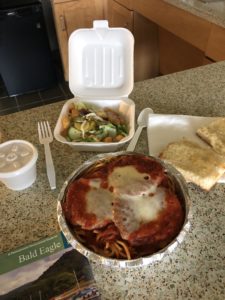 The storms they predicated finally arrived and we had torrential rains, but no lightning or thunder. It was a great way to end my first day away from my home since the middle of March.  I feel asleep excited  about an early start to another day of exploring this beautiful park.  Here is a link to  a gallery in my blog website with more photographs from my hike in Bald Eagle State  Park. Nature Inn Afternoon hike May 15 2020. 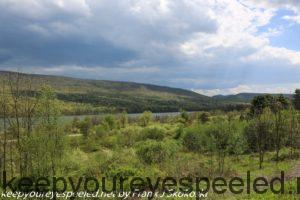 “There are no words that can tell the hidden spirit of the wilderness, that can reveal its mystery, its melancholy, and its charm.” – Theodore Roosevelt 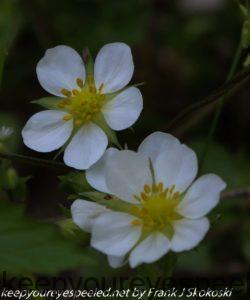