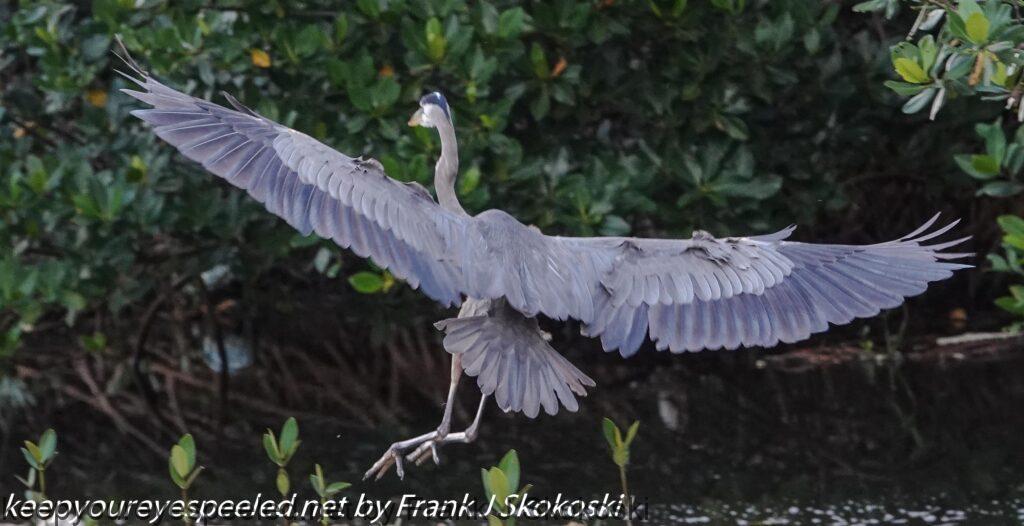 I left Florida City and the Everglades on Sunday afternoon and drove  the scenic 30 miles south on U.S. Route 1 to Key Largo. After settling in my room at the beautiful Bar Harbor & Coconut Bay Resort I edited some photographs relaxed  in their lovely gardens and visited some friends. I was up early the next morning and was anxious to hike in the Dagny Johnson Key Largo Hammock State Park. 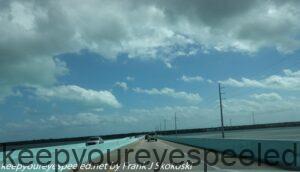 It is located about nine miles north  of my resort and I arrived shortly after sunrise at 7 a.m. It was partly cloudy and a warmer 72 degrees. 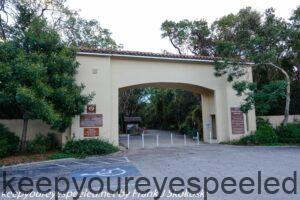 Dagny Johnson Park was once  the site of a planned real estate development, “the Mediterranean Minutes from Miami”  that, thankfully, failed in 1982. I had posted a few blogs on the history of the park and they can be found in the archives in my blog website. 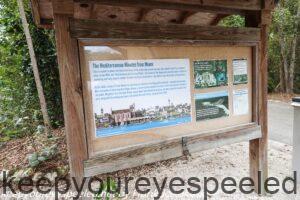 The park contains the largest tropical hammock remaining in the United States. I am still trying to learn the many  sub-tropical  hardwood trees that grow along the trails of the park, and can now recognize two very easily the reddish gumbo limbo tree and , one to be avoided, the poisonwood tree. I walked along the trail for about a half mile and came to a split in the trail. 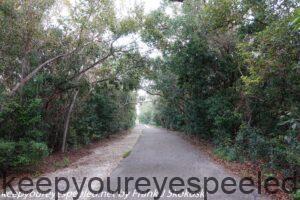 At an intersection ,  I followed the trail that led to a bay on  the ocean. Mangroves trees and lower shrubs now grew along the narrower trail. 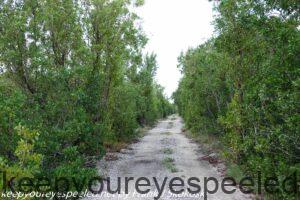 There was an old  canal associated with the failed development along the trail and here I observed a number of wading birds including this  great blue heron in the shallow waters of the canal. 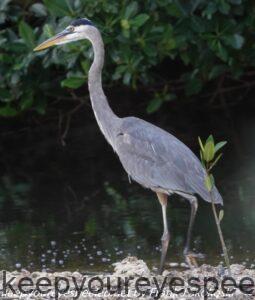 It flew away as I approached, spreading it’s massive, and beautiful wings and feathers. 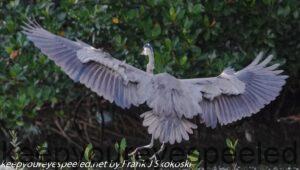 There was also, I think this tri-colored heron perched in a tree. 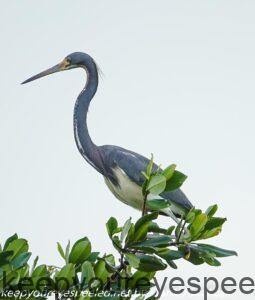 It too, flew off as I approached. 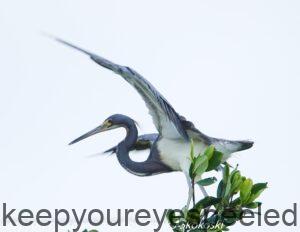 There were also some green herons  and little blue herons in the canal but they flew off before I could get a photograph. I was able to get a photo of this white wading bird, I believe it is a cattle egret and not the larger great egret. 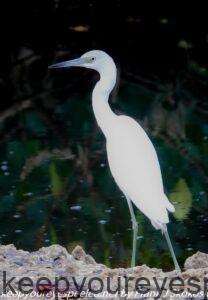 I followed the trail to a small  bay on the ocean. 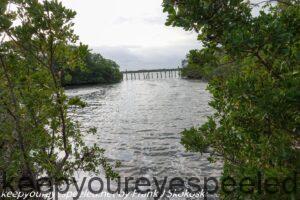 There is a primitive campsite  located here and a good view of the rising sun, however there were clouds there this morning. 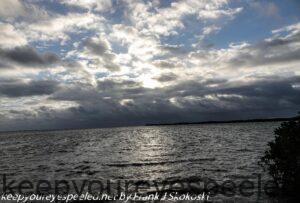 A cormorant was sitting atop a post blocking boat access to the bay, watching the sunrise,  and hoping to find a meal. 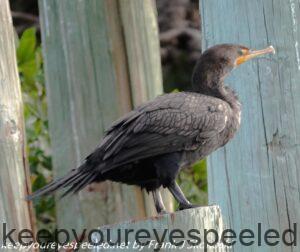 And in the distance, soaring high above the ocean was a frigate bird. I loved seeing these birds in the tropics since I first saw one in the Galapagos Islands. 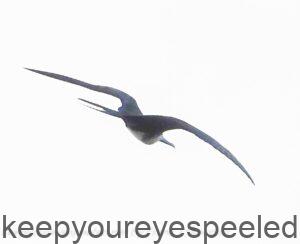 Returning to the main trail I saw a few wildflowers growing on the trail including, I believe these two species which are invasive, marsh fleabane and 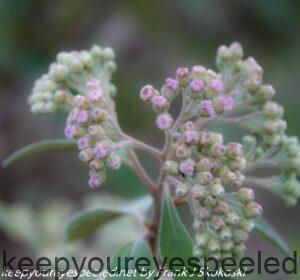 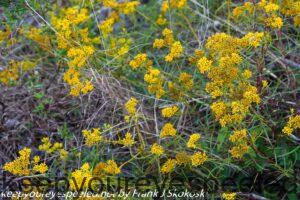 I believe these two flowers are both native and pretty. Coralberry and 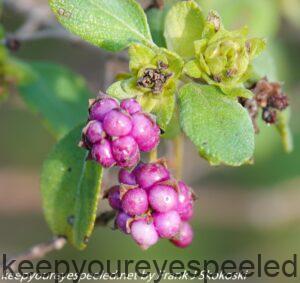 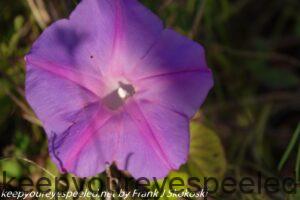 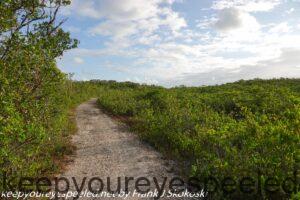 and other coastal vegetation, that is reclaiming the remains of the construction of the land development that was begun. Utility poles and abandoned sewer and water lines  can still be found in the park. 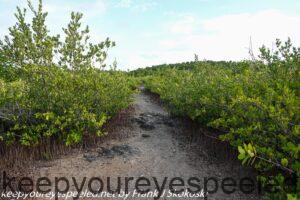 The trail now entered some wetlands where I am think  there may be some crocodiles which can be found in this part of the Florida Keys. Needless to say I walked fast and quietly through this section although crocodiles are not usually active early in the day. 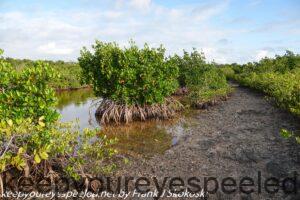 The trail again entered the tropical hammock forest for which Dagny Johnson Park is famous. 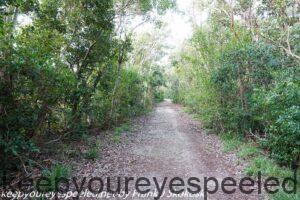 Here there are many tropical trees but the  mahogany trees, poisonwoods trees and my favorite, the gumbo-limbo trees are the only ones I can identify. 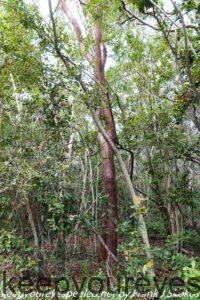 Last year I encountered swarms of mosquitoes here but not a one on this hike. I did see some insects, a couple of butterflies. This one I had seen in the Everglades. It is,  I believe a Julia heliconian butterfly. 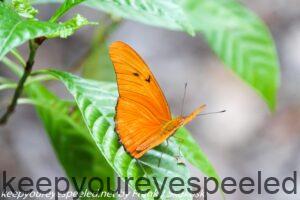 I also saw a few of these butterflies which I believe are mangrove skippers. 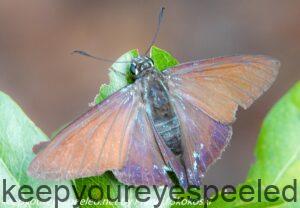 The trail now passed a large made made lake or canal which, again I think would have been part of the development. On my two previous visits to the park I always saw a few herons on these waters but there were none on this hike. 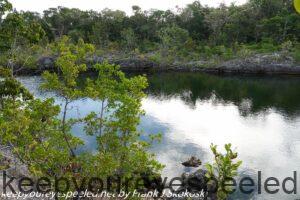 I came to the park entrance and re-traced by steps to explore a nature trail in the park. Again, on my visits the last two years I always saw some song birds on this path. Not this year.   I had walked  close to five miles so I decided to finish my hike in the Dagny Johnson Park.  I was hoping to see more birds on this hike but I was happy seeing, and being able to share, the ones I did. It was another great hike in the sub-tropical paradise of the South Florida and the Florida Keys. Here is a link to a gallery on my blog website to some more photos from my morning hike in Dagny Johnson Park . Florida Day Six:  Key  Largo morning hike February 22 2021. 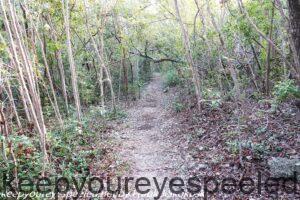 Like no other place on earth. Raw natural beauty, relentless freedom, unorthodox natives. A friend told me something else about the Keys I never forgot: Down here, nobody is who they seem to be. When people in other parts of the country want to reinvent themselves, they come to Florida. But when people in Florida want to reinvent themselves, they come to the Keys. — Tim Dorsey 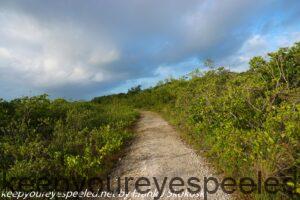