Florida Day Three. A Manatee Sighting! And A Visit To Nearby Bahia Honda State Park.

Florida Day Three. A Manatee Sighting! And A Visit To Nearby Bahia Honda State Park. 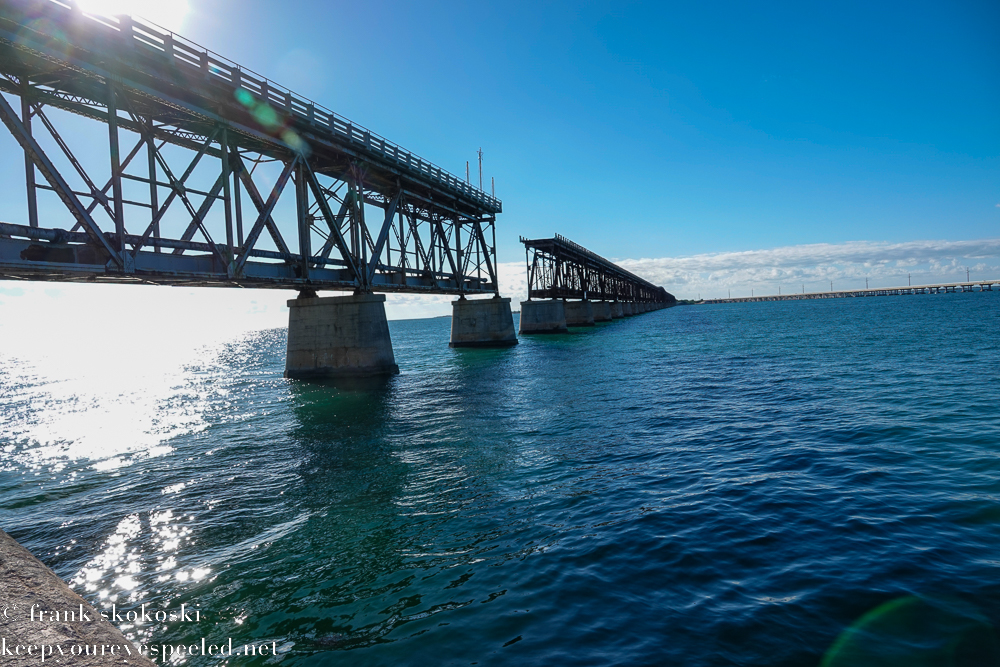 After my morning walks on Big Pine Key , I spent some time relaxing and editing photos  at the Barnacle Bed and Breakfast.  In the afternoon  I walked over to the canal again, and, this time I  saw two manatees! They were barely visible floating in the water of the cove.  Only small parts of the massive bodies appeared above the surface. Occasionally a flipper or snout would pop up above the waters.  I didn’t get any good photos  of these  slow moving and clumsy sea  mammals but it was still a great experience just to see them. I watched them  almost an hour, hoping they may come closer to the canal. They didn’t. They just floated in the same spot, enjoying the warm Florida sunshine and waters.

It was now late afternoon and I decided to visit Bahai Honda State Park, located about  5 miles away  on the key of the same name. The key became famous when the industrialist Henry Flagler  built a steel bridge  connecting  Bahia Honda Key to the Spanish Harbor Key as part of the Overseas Railway connecting Miami to Key West. The railway was destroyed by a hurricane in 1935 but the bridge was converted to a highway until the 1970’s It was abandoned and  can still be seen approaching the key  on the Overseas Highway and from inside  the state  park. 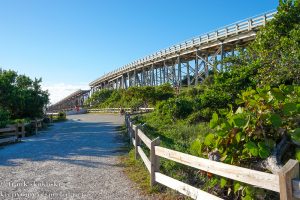 I entered the park, driving by this sand castle, parked my Explorer, 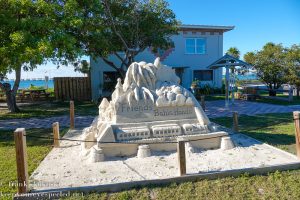 and followed a nature trail under the old railroad bridge. 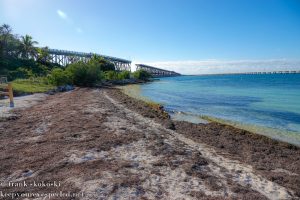 The park  was not crowded with humans or wildlife, , but here were still some critters active along the nature  trail. I few white ibises wadded in the bay, and foraged in the grass along the trail. 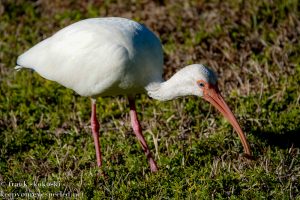 The trail  went under the bridge and here native flower,  including hairy beggarticks, 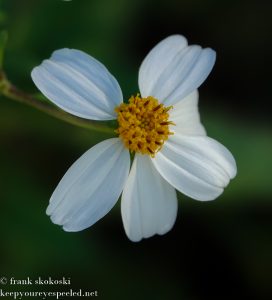 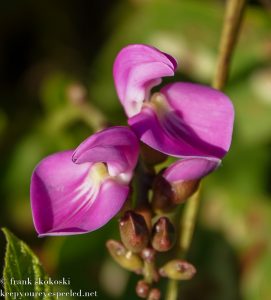 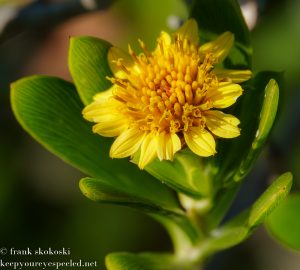 attracted butterflies including this gulf fritillary butterfly, and 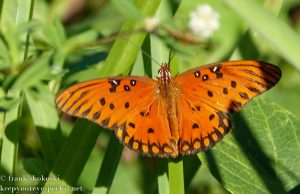 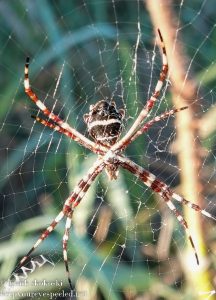 A few lizards were scurrying on the ground. I believe they were brown anole lizards. 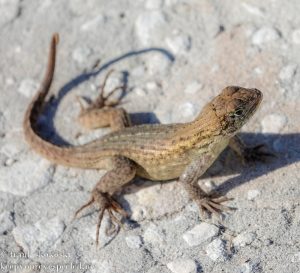 There were also invasive flowers growing on the trail such as these puncture vine flowers. 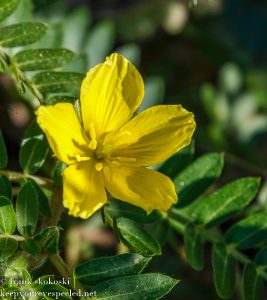 I followed the trail to a ramp that led to the old railway bridge. 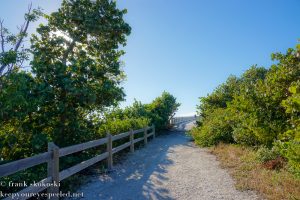 The ramp ended at the old bridge, which has been gated for safety concerns, 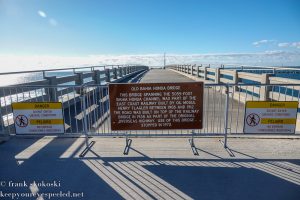 The views from here were spectacular. It would be a great place to watch a sunset. 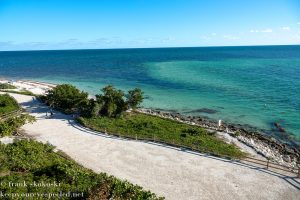 I walked down to the very narrow beach.  The Bahia State Park really is just one small beach. It was wasn’t  crowded even on this beautiful sunny afternoon. , 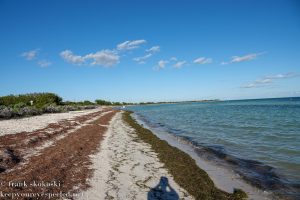 I saw a few sanderlings running along the shore, 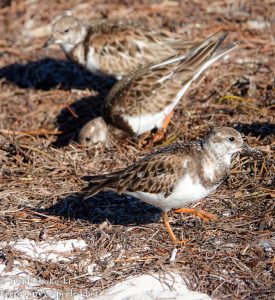 and some brown pelicans flying overhead, 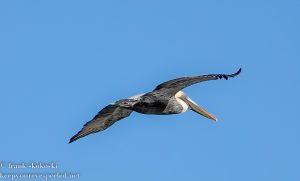 I followed the  beach to where it ended in some rocks and coral. It was a small but nice beach. I walked back to the parking lot, 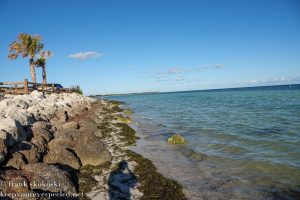 seeing a few ring-billed gulls on the beach and 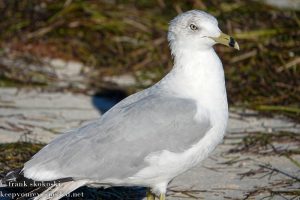 palm warblers in the parking lot. 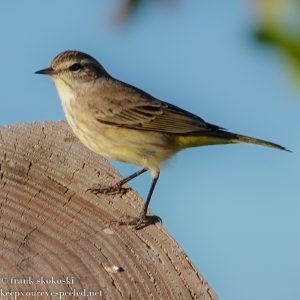 It was late now, and I wanted to watch the sunset from  my  beach at the Barnacle Bed and Breakfast  so I  grabbed a quick bite to eat at the shop at the park, I left Bahia Key 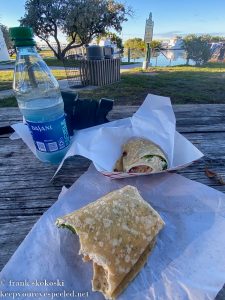 and drove back, arriving  just in time to enjoy a beautiful Florida Keys sunset. It was a clam , peaceful feeling  watching a sunset on miles of desolate beach, There were  residences on both sides of my lodging, 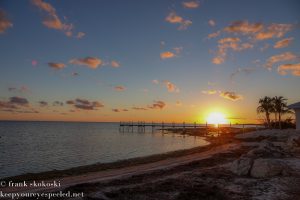 but not one was out enjoying the peace and  quite of this evening. I was and it was a wonderful experience. 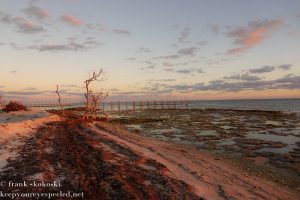 I hope to return in March of the bird migration. I heard the keys are a great place to watch our  Spring and Summer feathered friends return from their Winter homes in South America , Central America and the Caribbean Islands. I hope to be there to welcome them, and I hope to be watching more  beautiful sunsets in the keys. Here is a link to a gallery with some more photos from my afternoon visit to  Bahia  Honda State park and the sunset. Florida Day Three.  afternoon January 12 2023 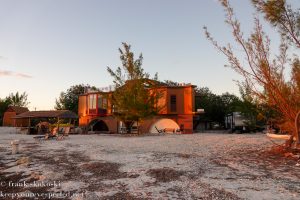 “Every time I stand before a beautiful beach, its waves seem to whisper to me: If you choose the simple things and find joy in nature simple treasures, life and living need not be so hard.” – Psyche Roxas-Mendoza

This site uses Akismet to reduce spam. Learn how your comment data is processed.