Poland Day Eight: Saturday April 15 : A Morning Walk Through Not So Boring Czestochowa.

April 16, 2017 / fskokoski@gmail.com / Comments Off on Poland Day Eight: Saturday April 15 : A Morning Walk Through Not So Boring Czestochowa.

Poland Day Eight: Saturday April 15 : A Morning Walk Through Not So Boring Czestochowa. 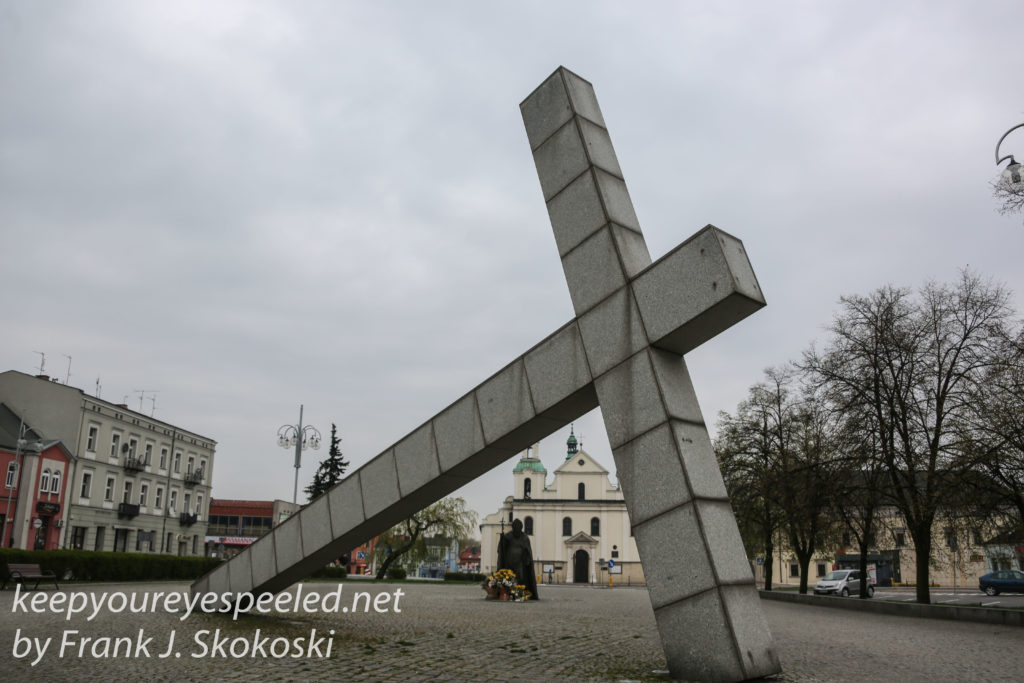 I awoke refreshed this morning , having had another good night sleep.  It took me a few days too adjust to the time change but looks like I have done it. It was overcast and cool when I left my hotel next to the  Monastery for a hike to  again explore the maligned city of Czestochowa. 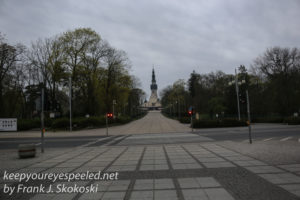 I say this because all of the tour books I had purchased before  my trip indicated that, besides the Monastery at Jasna Gora, the location of  the portrait of Our Lady of Czestochowa or the Black Madonna,  there was little to do here.  Before my visit I imagined it would be a small factory and farming village. How wrong they were, as my walks yesterday and today have shown me.  Like yesterday, I again proceeded down the main avenue, which, because of the early hour was mostly deserted. 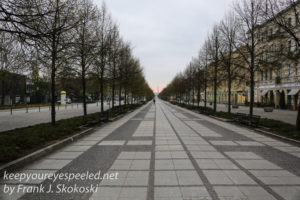 I just love roaming the streets of different cities. I enjoy looking at the storefronts, the restaurant menus, the offices and even the advertisements on the billboards. They teach you so much about a country and it’s people. 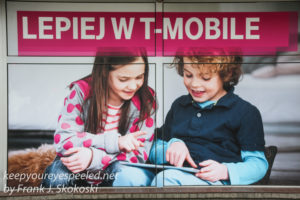 I walked beyond the town square, where I ended my walk  yesterday  and, as usual in Poland, found more churches, 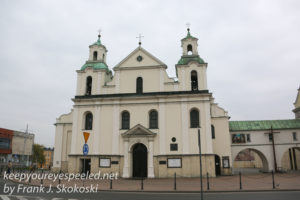 and other building of interest, including this modern cinema. 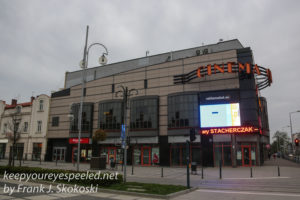 I walked on over the active railroad line, both passenger and cargo. . It was this railroad right of way,  built in the early 1800’s,  that connected Vienna with Warsaw that helped start to develop Czestochowa from  a sleepy medieval  village  into the modern city of a quarter million people it is today . 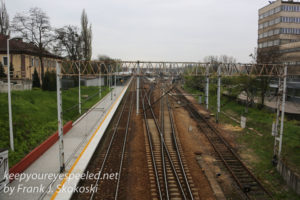 As the main avenue ended the city became more commercial , especially after I crossed over the famous Warta River. 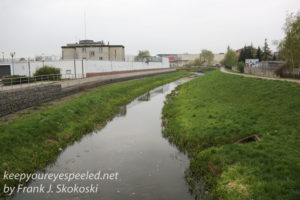 I am not positive, but I would guess this plant provides most of the city with it’s electric needs. 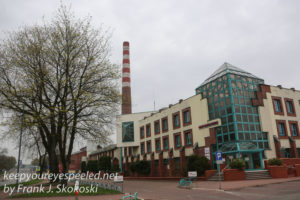 I crosses another small river the Kucelinka and found myself in a more modest residential neighborhood. Still, the homes were all well maintained and many had beautiful yards. 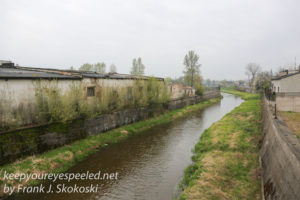 I came across this  little church, as I said there seems to be churches are everywhere in Poland. 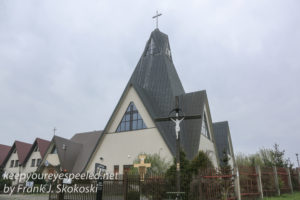 I was now entering the picturesque Polish countryside that I have, until today, only saw from the windows of a bus. I enjoyed hearing the crowing of the roosters in the distance. 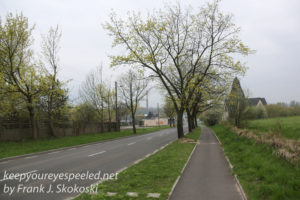 As I saw from my bus rides there seemed to always be a statute, cross or monument strewn with flowers along the way and sure enough I found this cross today.  I was about three miles out from my hotels now and decided it was time to return. Here is a link to some more photographs from the first part of my hike today.  https://keepyoureyespeeled.net/poland-photographs-april-2017/nggallery/poland-april-2017/Poland-Day-Eight-Czestochowa-Saturday-morning-walk-part-one-April-15-2017- 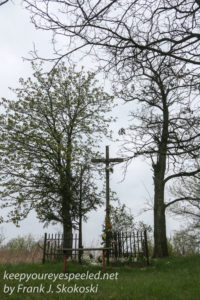 On my way back I encountered some chickens and one of those roosters I heard on my walk out into the countryside. 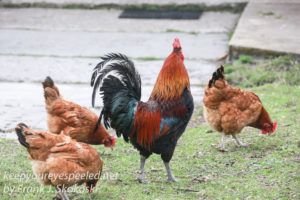 I  retraced my steps back to town and  decided to head toward the steeples of this church I saw in the distance. 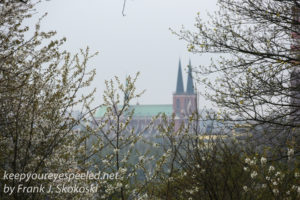 I walked through some older run down neighborhoods to get here, but it seemed old structures such as these where being torn down and replaced with modern ones. Czestochowa, appeared, to me anyway, to be a growing town with a lot to offer. 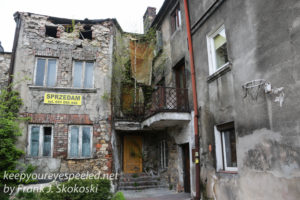 And with a lot of history. I was I had more time to learn about these many old buildings that are found throughout the modern city. 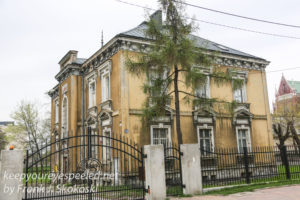 I came to the church steeples I saw in the distance and learned it was the Cathedral Basilica of the Holy Family. I learned it is a new church, by Polish standards, being built only a hundred years ago. 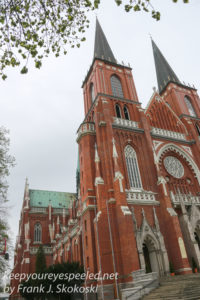 I decided to  have a look inside and found  a few worshipers at this early hour. . I learned photographs were allowed, as they are in most churches, although many of the older folks do not appreciate it. However the priests seem very willing to allow the beauty of their churches to be shared. 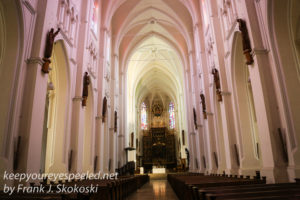 The interesting thing about this church was the audio of a bird singing that was being played in the church. I spent a few minutes admiring the statutes, altar and structure. Here is a link to some more photographs of the interior of this beautiful church. https://keepyoureyespeeled.net/poland-photographs-april-2017/nggallery/poland-april-2017/Poland-Day-Eight-Czestochowa-Cathedral-Basilica-of-the-Holy-Family-Saturday-April-15-2017- 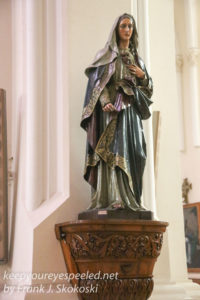 I continued my walk through some mixed residential and commercial neighborhoods.  Like in the States they too, have garbage trucks. As I have found all over the world, folks pretty much live the same way and do the same things, eat, sleep, grow old and die, All of us.   So sad that there is so much hate in the world, mainly because we don’t get to know one another better. 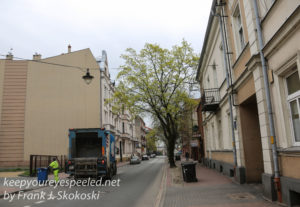 I made my way back to the main avenue and, just as I was thinking how much I enjoy my travels and love of nature, I saw this shop window. How fitting. Globes, maps, nature books and puzzles. All so much a part of my  happy childhood. Thanks dad. 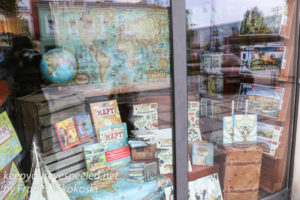 There were many  flowers for sale along the main avenue. My father would always bring my mom a flower, usually a lily or hyacinth on Good Friday. In fact one of my earliest memories was accompanying him to a greenhouse on a warm and sunny Good Friday. It real does feel like I am back home on these streets of Poland. 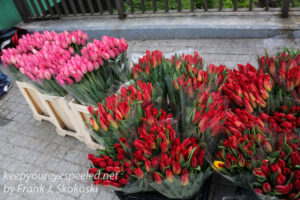 I again left the main avenue to explore the city and found quaint neighborhoods, which I believe house mainly the elderly. 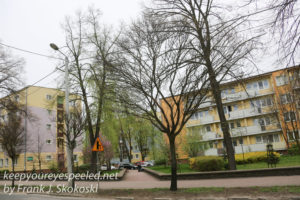 There were many small markets along the way and I stopped in one to get some photographs of the local grocery items and produce. 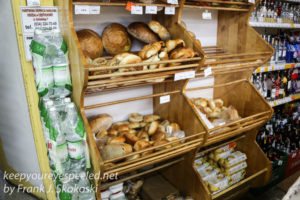 As I roamed these side streets and neighborhoods I wasn’t sure if I was heading in the right direction. Some dark storm clouds were forming and it felt  like the rain they predicted was going to arrive. 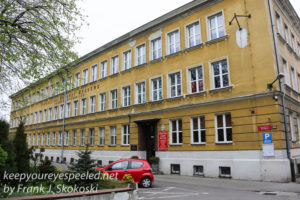 I started walking in the direction I believed my hotel was but i wasn’t quite sure. I tried to make  my way through the meandering streets to the main highway but was starting to doubt myself when, after turning a corner, there I was right behind my hotel! A homing instinct or dumb luck I am not sure.I do know I was glad to be back, although the rain did not arrive until evening, I was tired and very hungry. . I was glad I was able to get this enjoyable walk in through the beautiful streets of Czestochowa.  I love it so much already. Here is a link to some more photographs from my walk. https://keepyoureyespeeled.net/poland-photographs-april-2017/nggallery/poland-april-2017/Poland-Day-Eight-Czestochowa-return-hike-Saturday-April-15-2017- 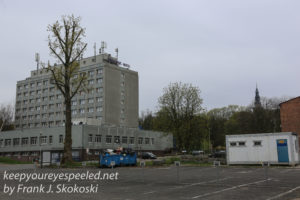 “There’s something about arriving in new cities, wandering empty streets with no destination. I will never lose the love for the arriving, but I’m born to leave.”
― Charlotte Eriksson