Puerto Rico Day Four: A Morning Walk Along My Own Private Ocean And Beach

February 21, 2018 / fskokoski@gmail.com / Comments Off on Puerto Rico Day Four: A Morning Walk Along My Own Private Ocean And Beach

Puerto Rico Day Four: A Morning Walk Along My Own Private Ocean And Beach

I awoke early my first full day at the Copamarina resort. Located on the southwestern side of the island, the resort and the surrounding Guanica Dry Forest Reserve was spared the brunt of hurricane Maria. The area is noted for it’s rare dry forest and I was ready to explore. After finding some coffee, I was off looking for the ocean and a  sunrise. 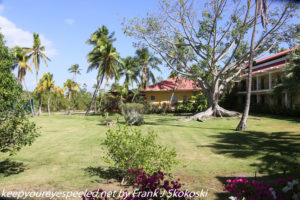 I drove  about a half mile to the tiny village of Punta Jacinto, located on a peninsula where I thought I could watch the sunrise. It was nice driving through the quaint village. There was a bed and breakfast with a private beach and residences ranging from modest smaller homes to large luxurious mansions overlooking the ocean. The sounds of roosters crowing was everywhere.  However, I was disappointed to find there was no place to watch the sun rise. 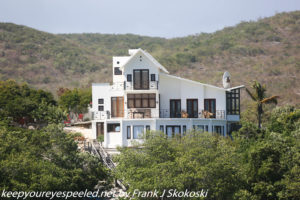 I once again drove the two miles on narrow route 333 to the beaches I visited  the day before. There was no traffic  on the road at this early hour. I parked at the end of the road and was soon walking one of the many beautiful and pristine beaches in the area. I missed the sunrise but still enjoyed the beautiful solitude of my own private beach. 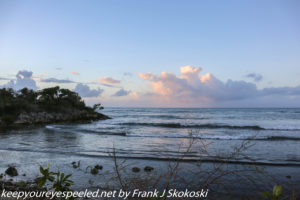 I followed the same trail I had walked the previous night. I learned later it was the Meseta Costal  trail. I was surprised  not to find much  bird activity. I chose this area because of it’s  unique dry forest and the many species of birds that inhabit the forest. I did see a few of these common ground doves along the shore. I was disappointed to not find more shore birds on the unspoiled beaches. 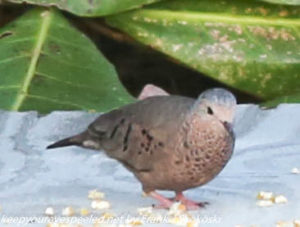 I walked east on the trail that hugged the shore line. It provided many spectacular views of the pristine beaches and rocky coast of southern Puerto Rico. 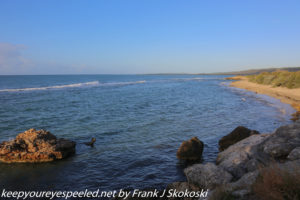 I was again intrigued by the many different species of plants and trees growing in these rare dry sub-tropical conditions. 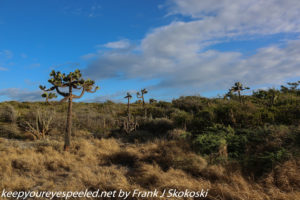 I wish I had the time to identify them all. Maybe someday, but for now I took plenty of photographs. 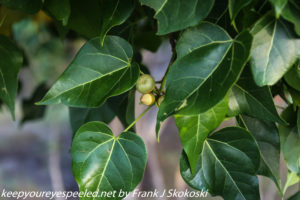 I particularly liked seeing all of the cacti. 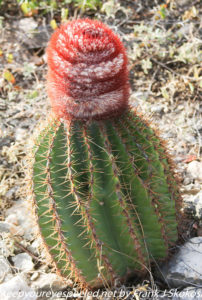 They took many shapes and sizes. 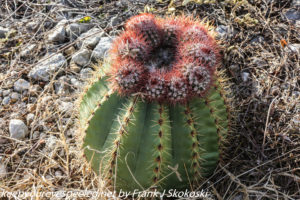 There were also many agave or century plants towering over the trail. 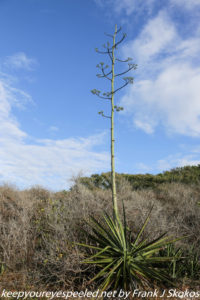 The trail was narrow and covered with hard, sharp coral like rocks which made walking somewhat difficult. But the scenery was sure worth the effort. 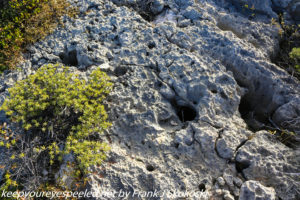 The trail meandered along the shore sometimes leaving the ocean and at other times  approaching spectacular cliffs. In one of these areas I found a limestone cave which I explored. Here is a video from a limestone cave I uploaded to my YouTube account. 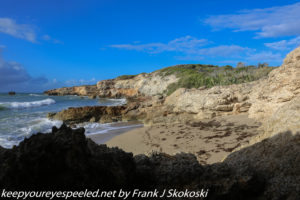 As the sun climbed higher in the sky it got hot. I was surprised to hear quite a few birds along my hike. Most were further in the thick forest of shrubs, trees and plants but a few landed on the trees, I believe this is a gray king bird, 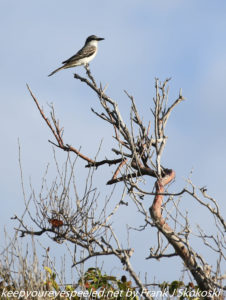 or on a cactus near the trail. 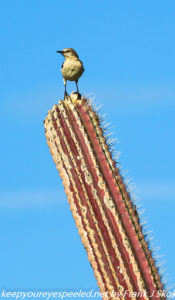 The king birds became more numerous as the forest become less dense as I continued my hike. 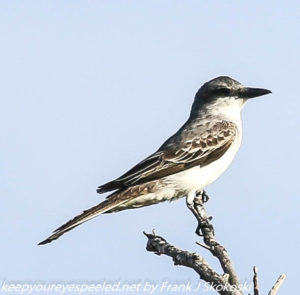 I walked out about two miles when the heat, and  my hunger, influenced me to return to my car. I continued to enjoy the beautiful views of the shoreline, 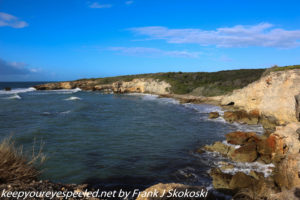 and of the many variety of trees, plants, shrubs and even some flowers, 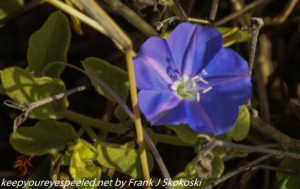 and some more birds including some more American oystercatchers  scavenging the beach for an early meal. Here is a link to some more photographs of the birds I saw on my hike.  Puerto Rico Day Four: Morning hike birds 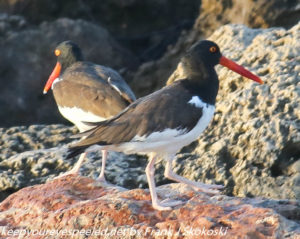 I returned to the beaches near my car and now found a few local residents enjoying what had been, for the past few hours, my own private beach and ocean.  Here is a link to some more photographs from my morning hike. Puerto Rico Day Four Morning walk. 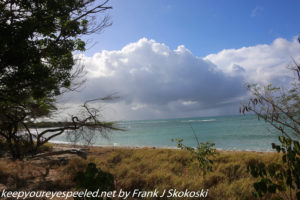 “It is said by the Eldar that in water there lives yet the echo of the Music of the Ainur more than in any substance that is in this Earth; and many of the Children of Ilúvatar hearken still unsated to the voices of the Sea, and yet know not for what they listen.”
― J.R.R. Tolkien, The Silmarillion 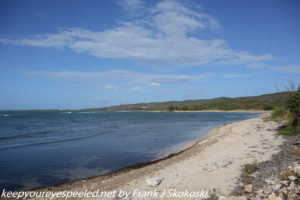