Upper Lehigh, The Nescopeck Branch Of The L & S Division Of The Central Railroad Of New Jersey.

June 20, 2015 / fskokoski@gmail.com / Comments Off on Upper Lehigh, The Nescopeck Branch Of The L & S Division Of The Central Railroad Of New Jersey.

Upper Lehigh, The Nescopeck Branch Of The L & S Division Of The Central Railroad Of New Jersey. 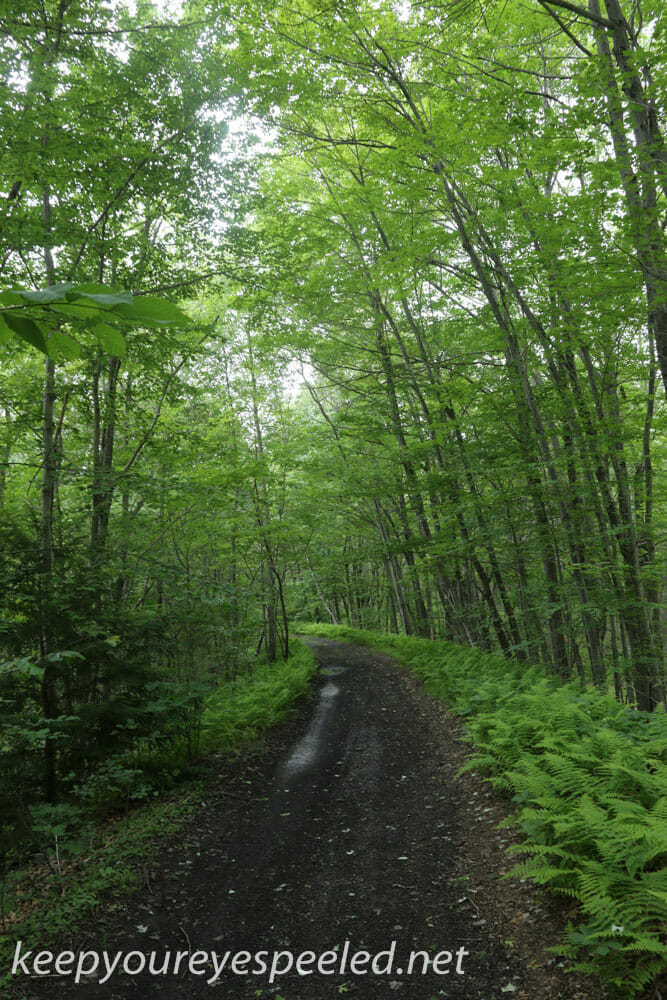 The Summer solstice occurs tomorrow at 12:38 p.m, my favorite day of the year,  and in Northeastern Pennsylvania it means the beginning of huckleberry season. These  low bush blueberries usually begin to ripen around the solstice. 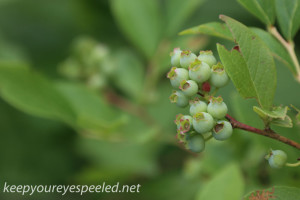 I headed out to the old mining village of Upper Lehigh, where the berries are plentiful,   to see if they  were ripe  but found the road to the area I have picked them in the past blocked off because of some new coal mining activity.

Since I was in the area I decided to walk out the abandoned right of way of the very old Nescopeck Branch Of The L & S Division Of The Central Railroad Of New Jersey. This railroad, long abandoned, entered the then thriving village of Upper Lehigh from the east. It was built in 1867, mainly to get the coal mined there to market, but also  brought many vacationers to hotels in  this  town, situated atop a mountain, to enjoy the fresh cool air in the Summer. 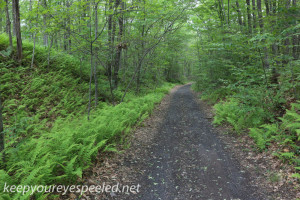 I have hiked this old railroad right of way quite a few times and always a pleasant walk under the towering oaks, maple, and yellow birch. The area was recently selectively logged but many old trees still remain. I did not see a lot of critters on my hike but did encounter a few toads, frogs, chipmunks, song birds and swarms of mosquitos, who sure enjoyed a free meal at my expense. I was

able to photograph a catbird and this bird which I have not been able to  identify.

The old railroad tracks and rails are mostly long gone but the old stone markers that were placed in the right of way still remain. Someone had painted some of them orange to allow the folks who ride  ATV and trail bikes on the trail avoid them. It is amazing that this stones, probably set in the ground when the railroad was built almost 150 years ago. 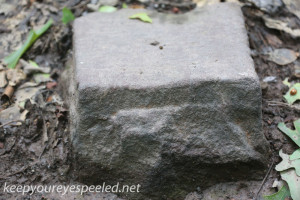 The path travels along the southern border of a large tract of State Game lands. It proceeds into an area that had be burned by a large forest fire about five years ago. 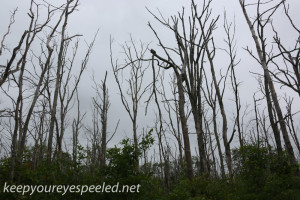 I have been hiking out here since the fire and have watched the re-growth of the forest. As is usually the case the ground is covered in new fern growth, blackberries and blueberries. 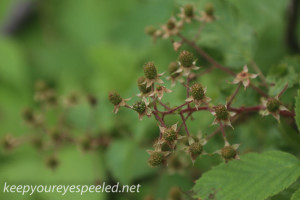 I then walked down into the abandoned coal strip mining areas to the south of the right away. On my way, I passed an old structure that I think had something to do with provided water for the steam engines that would use the railroad tracks but I am not quite sure. Please feel free to comment if you know what this structure is. 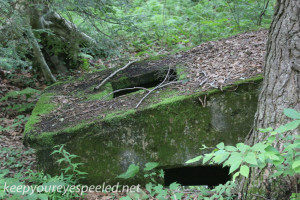 I did find some wild mushrooms growing along the way although, I thought, because of all the rain we have been getting, that there would be a lot more. 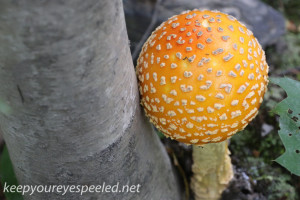 I headed back up to the railroad right of way and headed into an area of older and larger trees, many oak. It is beautiful in this area but the oaks are being devastated by an infestation of gypsy moths. It is a shame that we may lose some of these ancient oaks to this pest. 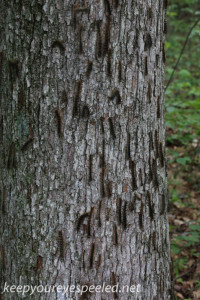 I headed back, attacked by swarms of mosquitos, It was a nice hike and hard to believe the path was created almost 150 years ago,.

Here is a link to some more photographs from my hike on this old and beautiful railroad right of way.https://keepyoureyespeeled.net/photographs-5/nggallery/blog-photos/upper-lehigh-june-20-2015h 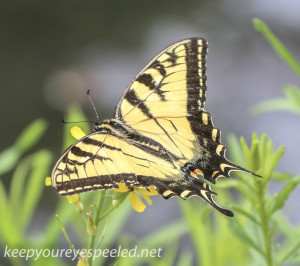 If you are seeking creative ideas, go out walking. Angels whisper to a man when he goes for a walk. ~Raymond Inmon