Another Year End Hike At The PPL Wetlands

December 30, 2018 / fskokoski@gmail.com / Comments Off on Another Year End Hike At The PPL Wetlands

Another Year End Hike At The PPL Wetlands 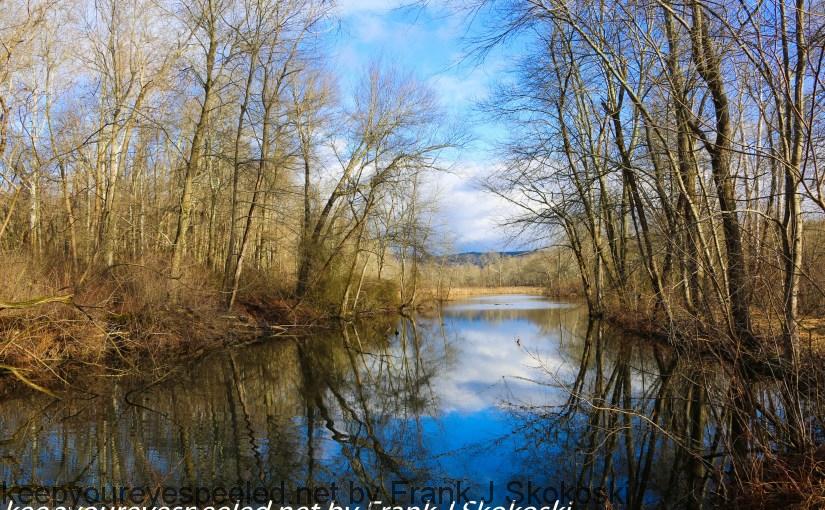 As many of you who follow my blog know, one of my favorite places to hike is the PPL Wetlands in Salem Township.  There is an abundance of wildlife there throughout the year.  I usually see some sort of critters, mammal, bird, reptile or amphibian on my hikes. And, of course. plenty of insects in the Summer.

I usual hike down here on the last week of the year. Most years there is some snow and ice on the ponds. Not this year.  Except for a frigid spell around Thanksgiving, we had a very mild Fall and early Winter.

And a wet one. It rained again yesterday keeping the Susquehanna River  filled to it’s banks.  It has been a very rainy year. We have had over 70 inches so far. Normal rainfall is around 42 inches a year.

It was a mild 41 degrees when I arrived under partly cloudy skies. I was hoping to see a lot of bird activity again. There were all kinds of birds in the Wetlands when I hiked here  last weekend. Not this week. I only saw this downy or hairy woodpeckers as I walked through the wetlands section of the nature preserve.

I  scared  a great blue heron twice but it flew off before I could get any good photographs.  I  didn’t see, or hear,  a single black-capped chickadee, tufted titmouse. nuthatch, sparrow or junco in the wetlands. There were dozens of each of these species last week.

I did find this mushroom growing on a fallen log. At first I thought it was a chicken mushroom. On closer inspection I knew  it wasn’t.  I never have seen one like it before. I  haven’t been able to identify it yet. Any help with the identification would be appreciated.

I walked over to the River lands section of the park. As I walked along lake Took-A-While clouds moved in from the north.

Last week I saw a long-tailed duck on the lake. And a kingfisher. This week there was a flock  of common mergansers which flew away as I approached.

There were even more Canada geese on the open waters then there were last week. I counted over 70 geese on the lake. I was hoping to see more water birds since there is no ice.

I was also hoping to see a bald eagle again. Not this week. I did see a hawk. I think it was a red-tailed hawk.

I walked back down to the river  and  decided to make my way back. As I walked along the lake I spotted this  great blue heron on the other side of the lake.  This time I was finally able to get a photograph.

There were quite a few folks walking along the trails along the lake.  A  few folks were fishing in its  cold waters

The skies became overcast and gloomy as I left the  River lands. The temperature was still mild despite a northwesterly wind. It was 42 degrees when I returned to my car.

I was a little disappointed  in not seeing more wildlife on this hike but I still enjoyed this Spring like hike on the last weekend of the year.

I hope to return many times in the new year. And I hope to see, and share, photographs of the many beautiful creatures that make these wetlands their home. Here is a link to some more photographs from my hike. PPL Riverlands hike December 29 2018.

In every walk with nature one receives far more than he seeks. John Muir