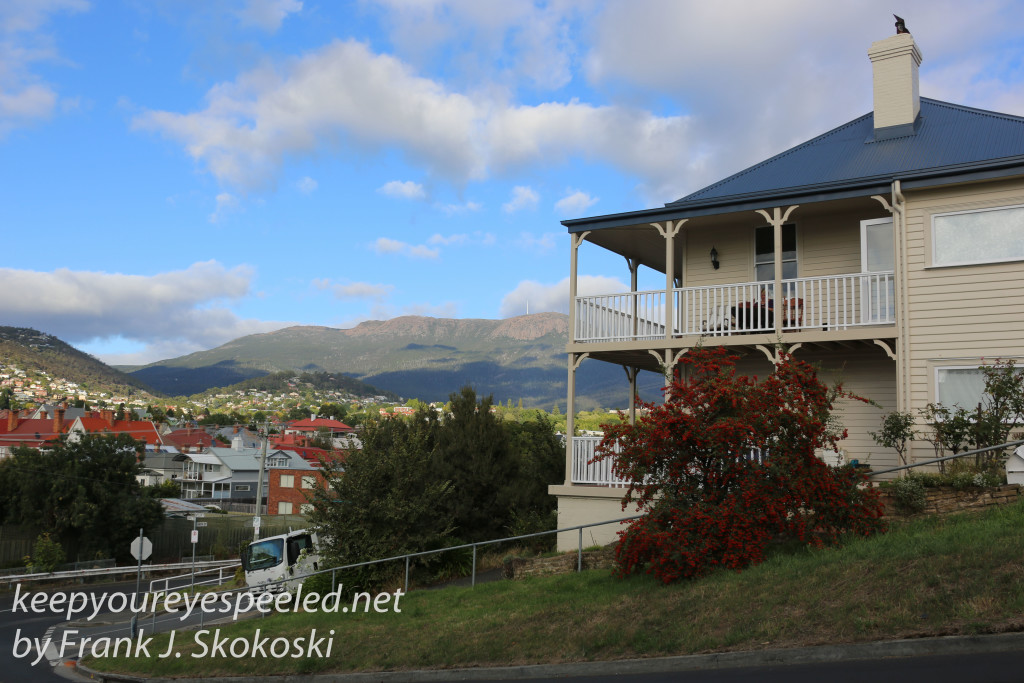 As a child, Tasmania was always some far off exotic place, home of that despicable cartoon character from the Bugs Bunny cartoon, the Tasmanian devil. I read a little about the island, off the southern Australian mainland, before my trip and knew there were a lot of forests and wilderness areas but still wasn’t quite sure what to expect. I was up early my first day in Hobart to have a look and find out. I walked to the water, in the cool morning air,  to watch the sunrise and was surprised how quiet this harbour town, capital , of Tasmania was in the morning 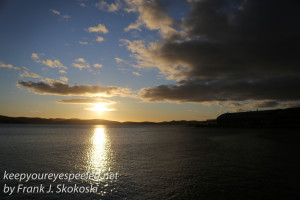 I was almost alone as I walked around the piers and docked fishing boats. The streets,  too,  were almost devoid of traffic. It was a peaceful feeling watching the sunrise, listening to the gulls and inhaling  that unmistakable smell of the ocean. I have always loved port cities and especially isolated ones like Hobart, where my imagination can go to work thinking about  the first  folks who  first set foot on these  distant shores and later those who arrived at this port town on this remote  part  of our planet. 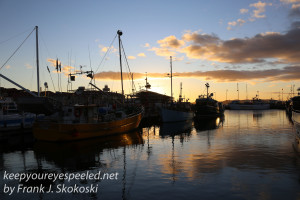 I roamed the many piers and the town slowly awoke. It was Saturday and that could have explained the lack of human activity. There were now walkers, joggers and fellow tourists on the streets and docks. I slowly explored the many sights  of the harbour and observed  even more activity in the distance. Here is a link to some more photographs from my walk along the docks. https://keepyoureyespeeled.net/australia/nggallery/australia/australia-day-seventeen-tasmania-hobart-sunrise-walk-february-20-2016 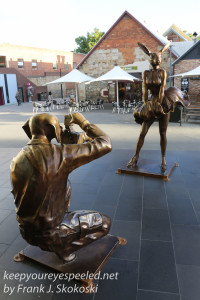 I continued to walk toward the activity, folks unloading trucks, and found I stumbled onto the famous Salamanca Markets. Located in Salamanca Place, a series of old warehouse dating back to the whaling days, and now filled with shops and restaurants, the area is closed to automobile traffic on Saturdays. And it is filled with  the stalls of local merchants and farmers selling all types of   merchandise, most of which was grown or produced in Tasmania. 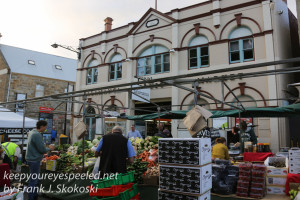 I walked through the stalls being filled with produce and products and engaged in some delightful conversations with  some of the merchants, especially the farmers.  They were so friendly and so curious to hear about me and life in the United States. We talked about blueberries, mushrooms and apples and I was invited by this kind lady to sample their orchard’s speciality. It was very good heirloom apple and reminded me of apples that grew near an abandoned mine shaft in my home town and which probably grew from seeds from apples eaten by the long deceased coal miners. 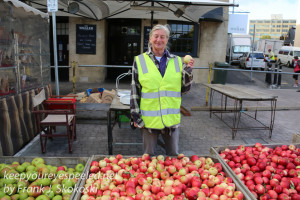 I left as the market came alive with crowds of people, both locals and tourists looking for some food, produce or a deal on some merchandise. Here is a link to some more photographs from my visit to Salamanca Markets.https://keepyoureyespeeled.net/australia/nggallery/australia/australia-day-seventeen-tasmania-hobart-salamanca-market-february-20-2016 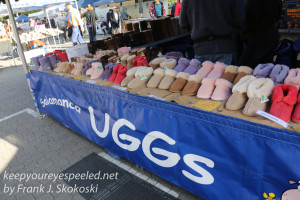 I walked into the historic, and now affluent neighborhood of  Battery Point. I learned some information about the area  from the local historical  landmarks along the battery that once protected the harbour. 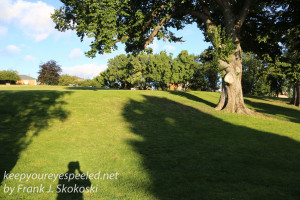 The neighborhood was quite as I walked the narrow streets and, like the homes in Scandinavia, all of them had beautiful  gardens filled with some familiar and some new and exotic flowers. I thanked a lot of the occupants, who were already up and working in the gardens, for having planted them. 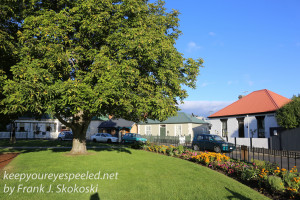 I had no map and just roamed aimlessly, taking in the architecture of the old homes and the many flowers in the gardens. I eventually made my way to the ocean again and found ta beautiful little mariana and noticed many of the homes along the waters also had docks for their boats. What a wonderful place to live. 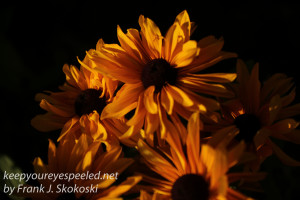 I continued my walk to the north, leaving Battery Point, and noticed the beautiful mountains, including the highest, Mt. Wellington that surround the city. It was like walking in a postcard. Here is a link to some more photographs from my walk through the streets of Battery Point. https://keepyoureyespeeled.net/australia/nggallery/australia/australia-tasmania-hobart-battery-point-hike-february-20-2016 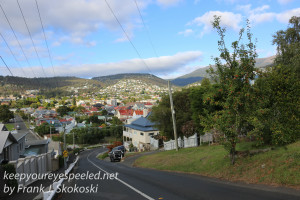 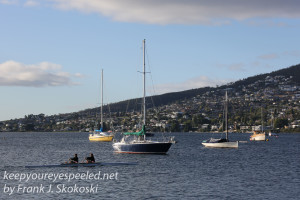 I found that the streets again took a sharp drop down to the ocean again and, of course I followed them and came down into the scenic Sandy Bay. What a spectacularly beautiful scene, sail boats and beach in the foreground and the beautiful mountains meeting the sea in the distance.

I stood on the beach, watching, and listening to a group of rowers on the water as folks were setting sail on this beautiful Saturday morning. It really was one of the most beautiful cities I have visited. 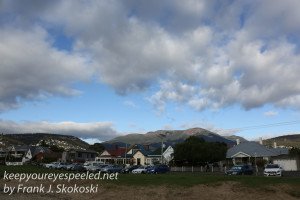 I made my way back up the steep hill and headed back toward downtown Hobart. I now found many more people awake and about in the neighborhoods. I came upon this old church and was disappointed when I found it wasn’t open. 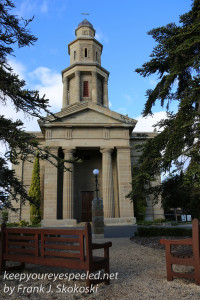 I continued through the residential  streets as I made my way back to my hotel. As I neared the downtown, I found the city was now awake. The streets were now bustling with traffic. I am sure many were leaving the city to visit the many parks and beaches in the area on this fine  late Summer morning.

I visited the markets again. now crowded with people, and music. I did some shopping myself and left this delightful place since I was getting hungry and they stooped serving breakfast at the hotel 10. a.m.  At times I  wished I didn’t have to sleep and eat on my travels since there was just so little time to see all of the beauty this city had to offer. Here are some more photographs of my walk from Sandy Bay to my hotel.https://keepyoureyespeeled.net/australia/nggallery/australia/australia-day-seventeen-tasmania-hobart-sandy-bay-hike-to-hotel-february-20-2016 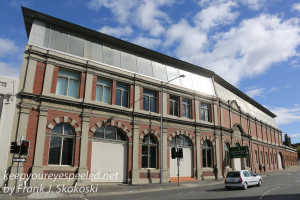 “This was how it was with travel: one city gives you gifts, another robs you. One gives you the heart’s affections, the other destroys your soul. Cities and countries are as alive, as feeling, as fickle and uncertain as people. Their degrees of love and devotion are as varying as with any human relation. Just as one is good, another is bad.”
― Roman Payne,