April 5, 2021 / fskokoski@gmail.com / Comments Off on Enjoying Spring In Northeastern Pennsylvania. 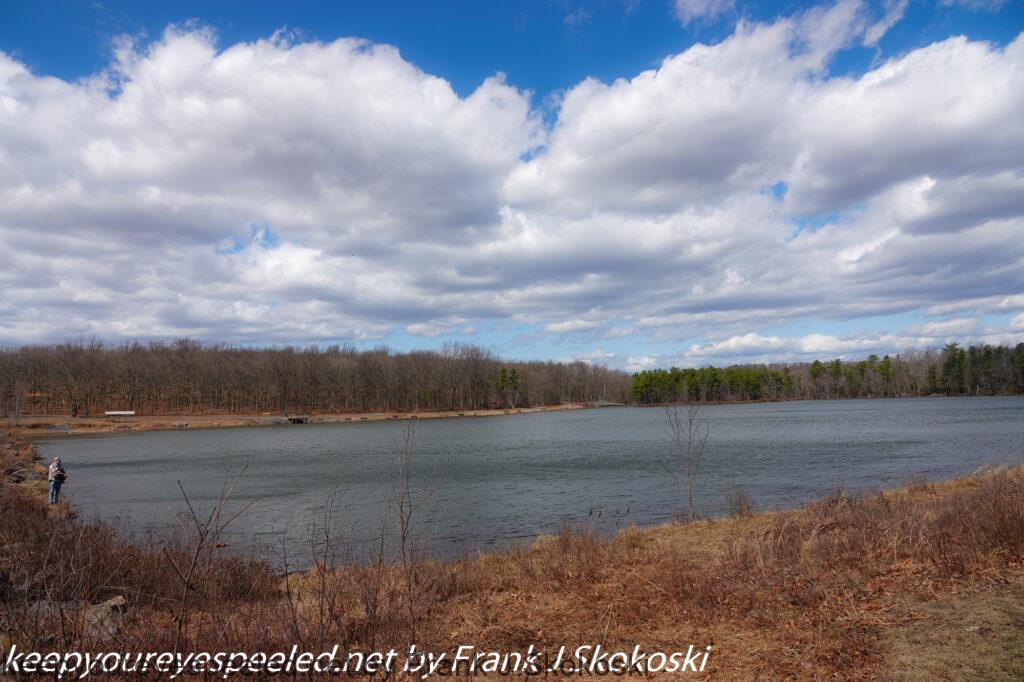 For me, there is no place like Spring in Northeastern Pennsylvania. I don’t like the Winters here anymore but Spring brings a magic to  this area where I was born and lived all of my life.  I have passed retirement age now, but still  work at my law practice. However,  after  37 years,  I am able to sneak out of the office a little early on sunny Spring days and enjoy the beauty of nature here in Northeastern Pennsylvania.  These past two weeks I have been taking these walks in the Community Park near my home in Hazle Township Luzerne County. 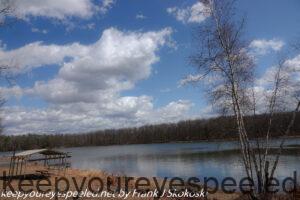 Last Friday it was windy and cold as it often is here in the Spring in Northeastern Pennsylvania when I arrived at the park.  A strong northwesterly wind was churning the waters of Lake Irena.  Cumulus  clouds were swiftly  passing overhead  carried by the winds. 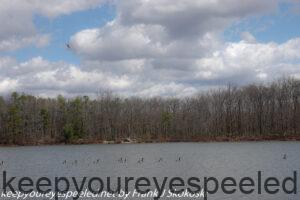 On the lake I noticed that the small group of  seven Canada geese had grown to a flock of about two dozen geese. They were swimming on the rough waters of the lake,

as were the pair of mallard ducks I  observed on my previous hikes.

There were a couple of new arrivals at the lake, a pair of bufflehead ducks,

that were being tossed on the wind generated waves of the lake.  The duck were here rest ting here on their long journey to  their nesting grounds in the interior forest of northern Canada. 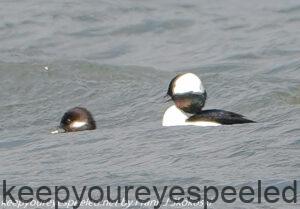 I walked along the lake in the cold wind and was surprised to find this turtle sitting on a log soaking in the warm sun on this cold day. It was the only one I saw on my hike. 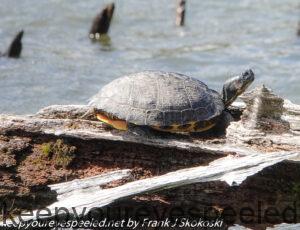 I walking under the tall oak and pine trees on the north side of the lake hoping to possibly see a bald eagle or osprey that visit the lake. 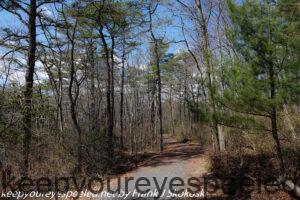 No eagles or osprey and very little wildlife , and  one lone fisherman was the only person I saw on my three mile hike. 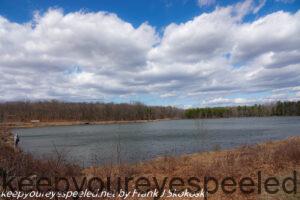 I left the lake and hiked on  a path through  the surrounding woodlands, and past the Babe Ruth field. 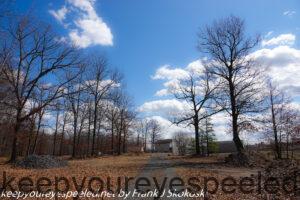 Here  walked out the old abandoned entrance road to the ball field.  It was here I found past vernal pond where I  was seeing, and hearing, the wood frogs.  The ponds were quiet  and only one wood frog was floating on the cold water. There were, however, large deposits of  wood frog eggs. 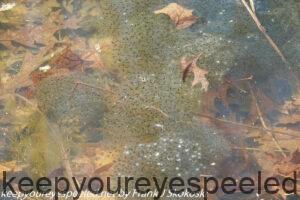 I walked out another half mile before staring back to the lake. 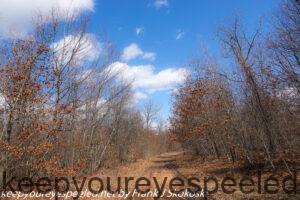 On the way the only other critters that were stirring where a small flock of robins searching for worms in the grass on and near the ballfield. 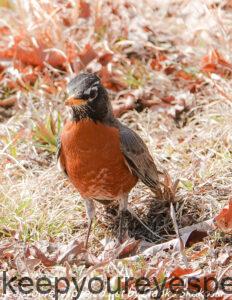 I finished up my three mile hike on Friday and returned  to the Park on Monday afternoon. It was even colder and windier on Monday as I again followed the same paths as I did Friday  on another three mile hike . It was sunny but the temperature was in the low 40’s. 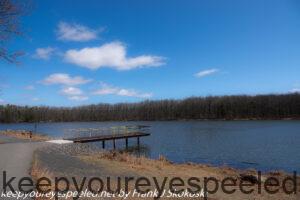 I didn’t see the geese or ducks on the lake and the only critters I saw were this osprey that flew overhead in the strong wind, 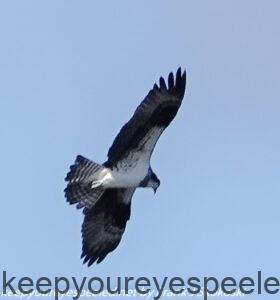 and this pretty little gold crowned kinglet that was hopping from branch to branch in the trees along the lake. 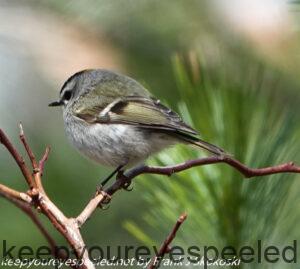 There were also some more coltsfoot flowers blooming along the trail. Spring was slowly, but surely advancing. despite the colder weather. 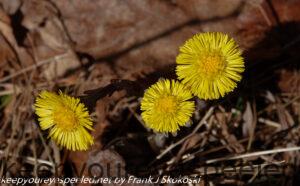 On Tuesday when I returned it was a little warmer . The skies were sunny and I did the same three mile hike along the lake and in the surrounding woodlands. 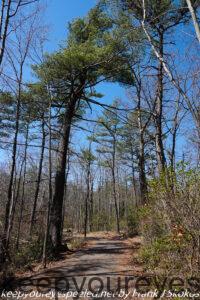 The pair of mallard ducks had returned, as did the flock of about two dozen Canada geese. 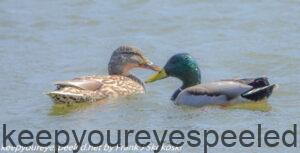 Walking past the vernal pond I notice some new greenish masses of eggs in addition to the wood frog eggs. I  am not sure but I think the are eggs of the red-spotted newt. 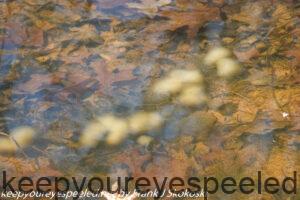 It rained on Thursday so I didn’t hike in the park. On  Friday another cold front came through bringing even colder temperatures. It was blustery with temperatures only in the low 30’s when I started another three mile hike. 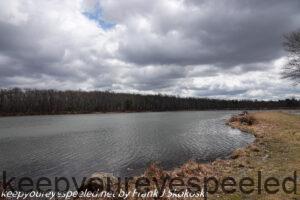 There wasn’t much wildlife activity because of  cold temperatures and winds but the Canada geese and  mallard ducks still  were swimming on the cold waters of the lake.

A few crows flew overhead in the strong winds. 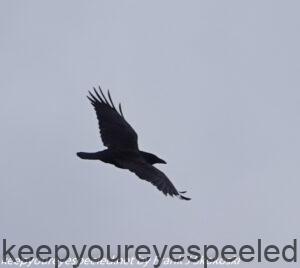 We had an inch of snow on the ground in the morning. Most had melted by the time I  arrived at the park, but some of the trees still had some leftover snow clinging to their branches. 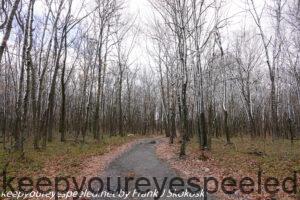 It was a blustery day, and not the most pleasant walking weather. The wildlife agreed and I didn’t see many critters on this hike either. It was still much better than hiking in the snow, ice and cold of Winter. And, knowing that every day something new will be showing up as the Spring advances makes it even better. I love the Spring here despite the weather. Here is a link to some more photographs from my hikes in Community park. Community park hikes March 26 to April 2 2021. 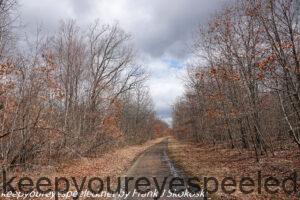 And it didn’t take long to see something new. On Friday I took a short walk in the mine reclamation area near my home. It was another sunny and cold day but nice to be out. I took my camera along just in case there were some mallard duck on some of the wetlands in the area. They usually nest here in the Spring. No ducks, but in the distance I thought I saw a coyote. I wasn’t sure even as I approached. It ran off leaving this uneaten mouse along the path. Fortunately I did get some photographs with my camera. 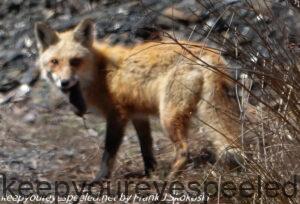 When I returned home from my walk, and cropped the photographs I discovered that it wasn’t a coyote but an old red fox. It was one of the biggest foxes I ever saw. And only a 1/2 mile from my front door. As I always do, I take the advise of my dad, and walk with my eyes peeled, you never know what you will see. 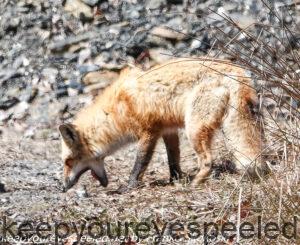 Spring is the time of year when it is summer in the sun and winter in the shade. ~Charles Dickens