Exploring The Remains Of The Mahanoy Plane: A Hike Into Our Coal Mining Past

Exploring The Remains Of The Mahanoy Plane: A Hike Into Our Coal Mining Past 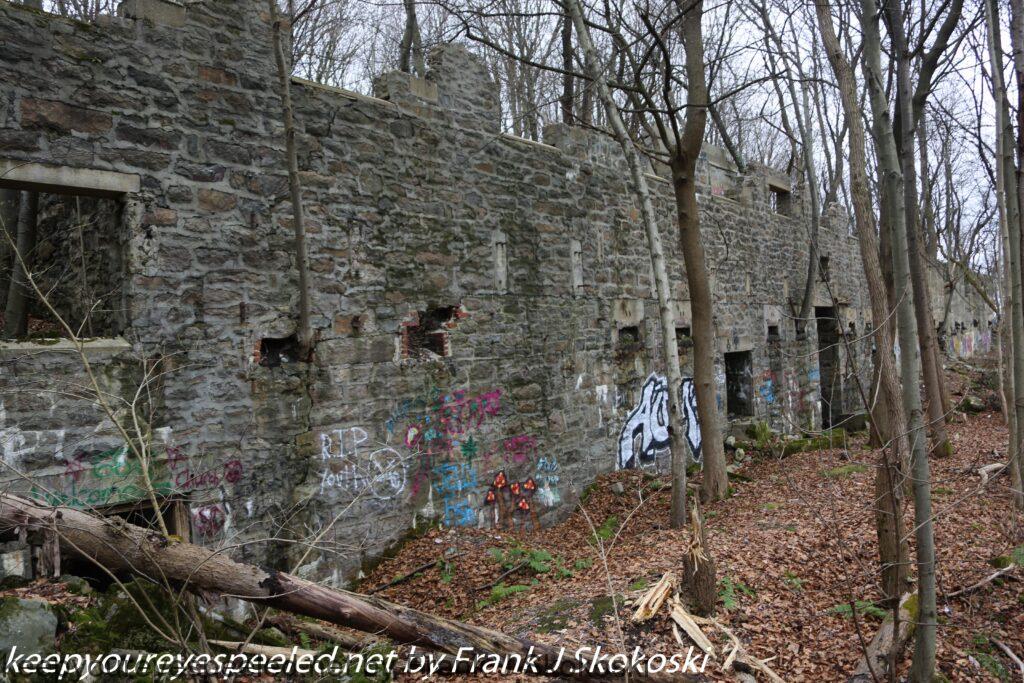 I have been re-reading a book  about the anthracite coal mining history of  our area, “The Miners” by Mary Siegel Tyson.  The book is about her ancestors  who worked in these deep and dangerous anthracite coal mines in the Hazleton area of Luzerne County. In the first chapter of the book  reference was made to an amazing engineering feat that was built in nearby Schuylkill County in 1861, The Mahanoy plane. 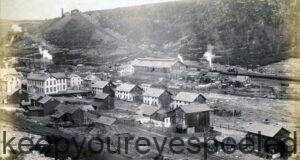 I did some research and learned that this incline plane rose 524 feet over the course of 2460 feet from the  town now know as Mahanoy Plane in Gilberton to the top of the Broad Mountain in present day Frackville.  I located the sight of some ruins on Google maps . On the Friday after Thanksgiving I left my home in Hazle Township and drove south on I 81 for approximately 26 miles  I parked near some baseball fields in Frackville. 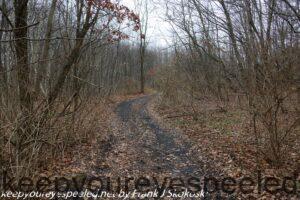 It took a little of exploring but I eventually found  a trail which I followed and which led me to some of the vast concrete ruins of what I believe to be the engine house, 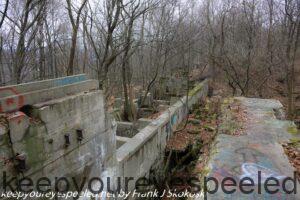 and what appeared to be coal storage bins.  When in operation hundreds of railcars filled with coal were hauled up the mountain from the many collieries in the valley below. 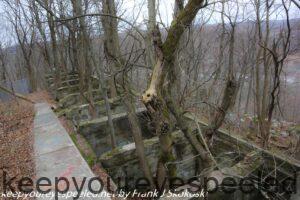 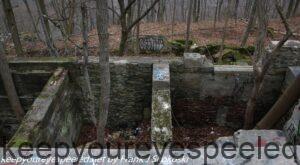 I  explored the old buildings and  ruins on the cold overcast morning  before I followed a trail down the side of the mountain. 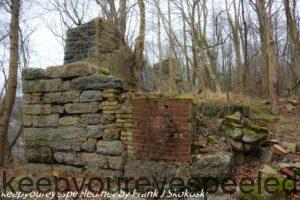 I wasn’t quite sure if I was on the actually route of the inclined plane. 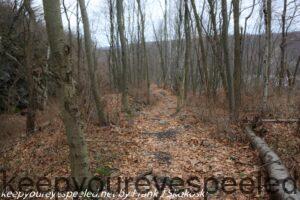 The trail,, which I believed was the route of the inclined plane,  was overgrown and eroded in the 90 years that elapsed  since it was closed. 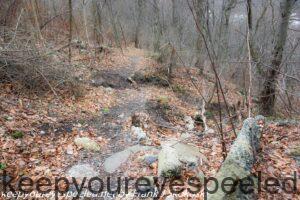 Looking through the leafless trees  I saw the town of Mahanoy Plane in the valley below. 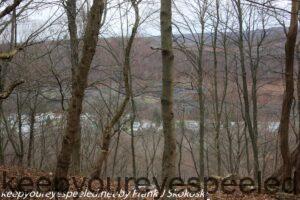 A few hundred yards down the steep trail  it intersected with another trail.

Here I found a collapsed tunnel. My guess was it was another  railroad that ran under the inclined plane.  At least I knew I was on the right track and continued to follow the trail I thought was the inclined plane down the mountainside. 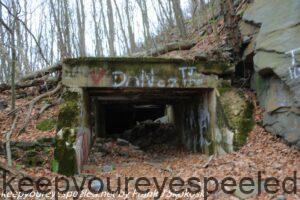 Continuing my steep decent I saw more evidence I was following the path of the inclined plane,  old wooden railroad ties along the trail, 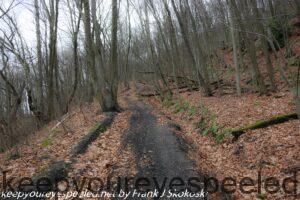 and telephone or telegraph poles I had seen in old photos. The trail was raised and consisted of coal waste, culm and slate  so is was man made.  600 to 800 cars filled with anthracite coal were hauled up the dual tracks each day. 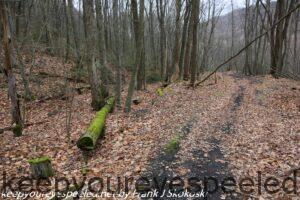 I followed the steep  trail continued downward and I came to another intersection. 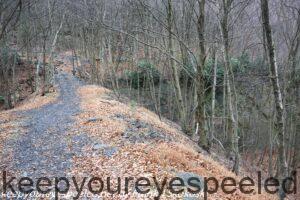 I wasn’t sure so I followed the trail to the right and it took me down to a still active railroad track. I learned I took the wrong path and I had left the original inclined plane. 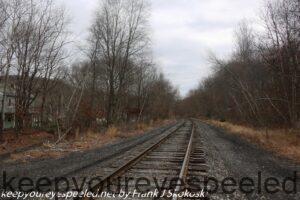 I saw a house along the tracks and walked into the town of Mahanoy Plane. Again I imagined the people who lived here while the inclined plane was in operation. Noise and dust must have been part of their lives. Most of the residents lived in poverty. 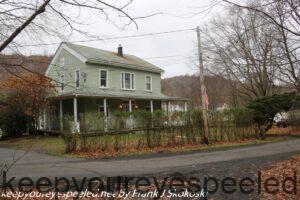 I followed a road into the  patch town and came to a bridge over the Mahanoy Creek, Now rust colored from acid mine drainage, I had learned this was once on of the best trout fishing streams in Pennsylvania before the coal mining operations polluted it in the 1860’s. 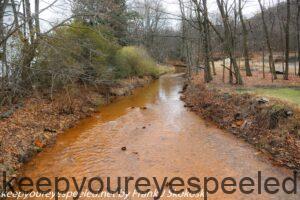 After walking through the town I decided to start my steep hike back up the mountain. 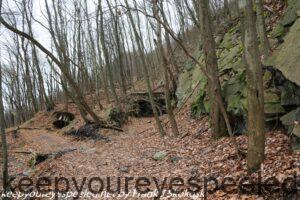 I had now concluded the trail I followed down was the path of the inclined plane. I followed it back up to the ruins, 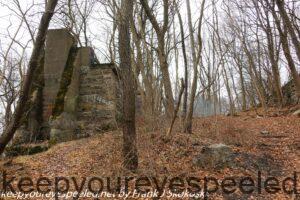 and continued  to explore the old concrete and stone structures.  I imagined the noise, smoke, dust and hustle and bustle of the hundreds of coal cars being unloaded and shipped to the markets in New York and Philadelphia via railroad and canals. 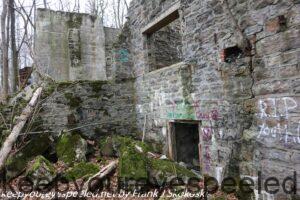 Almost all of the old structures were defaced  and covered with graffiti. Some artful, 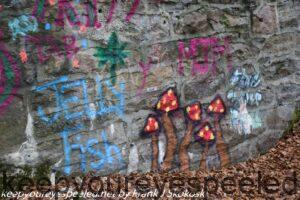 and others not so artful. 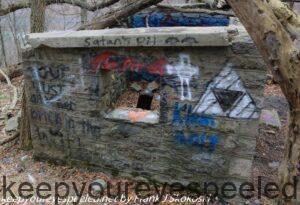 It appears the youth of the town of Frackville spend a lot of time here. 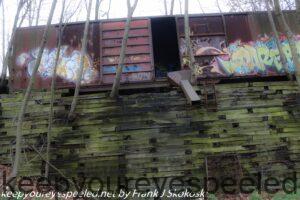 I also found a few abandoned railroad cars as I continued my exploration of the ruins. 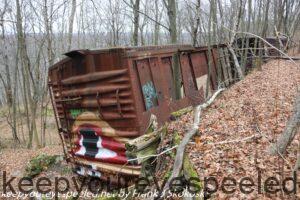 It was now afternoon and I was hungry and tired and decided to leave. I hope to return and learn more about this once critical hub of the coal industry in the anthracite region. Both of my grandfathers worked in the coal mines. It was a hard life. Both developed black lung, and my dad’s father died from it when he was 54 years old. I hope to share more blogs on our coal mining heritage. Here is a link to a gallery on my blog website  with more photographs of my hike on the Mahanoy Plane. Mahanoy Plane Hike November 27 2020. 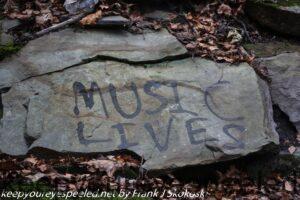