In Search Of Bald Eagles: A Scenic Ride Along The Delaware River.

February 6, 2017 / fskokoski@gmail.com / Comments Off on In Search Of Bald Eagles: A Scenic Ride Along The Delaware River.

In Search Of Bald Eagles: A Scenic Ride Along The Delaware River. 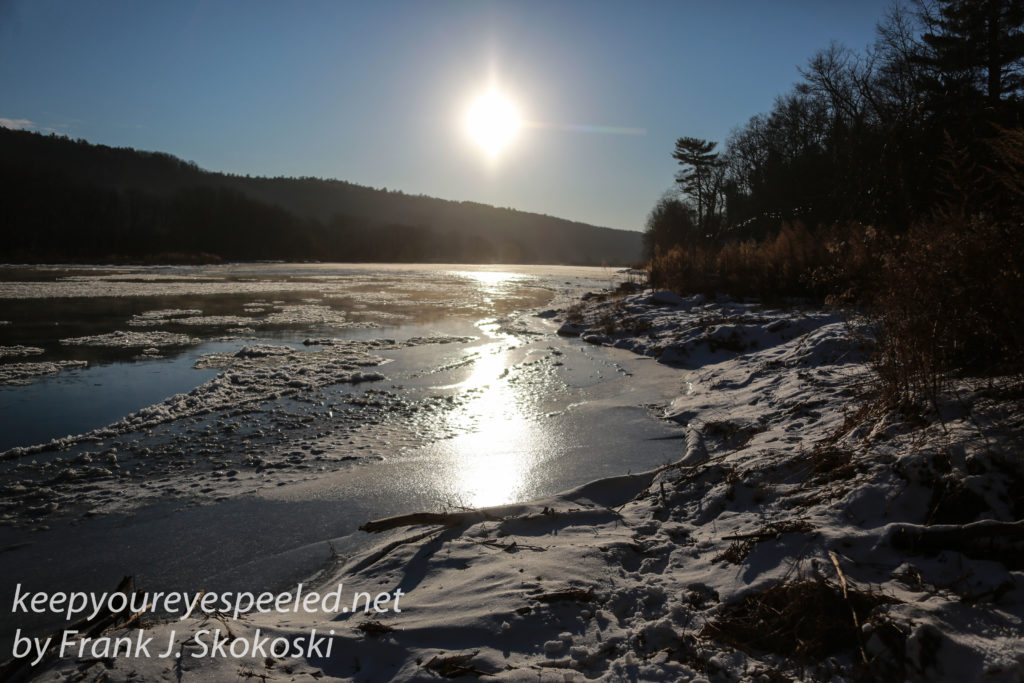 I was  excited when my brother Mike suggested we take a road trip to look for bald eagles along the Delaware River this weekend. I always get excited  whenever I get the opportunity  explore new places and what better way to spend a Saturday than looking for eagles. So my brother,  his son Mikey  and I left before dawn and headed north and east toward the Pennsylvania- New York border. We drove  the busy interstate 81 and route 6, for about an hour,  and found ourselves in scenic Wayne county just as the sun was rising. I have never been in  this part of Pennsylvania before and  I enjoyed the beautiful rural scenery we found as the sun rose and  lit the countryside.  There we not many fellow humans up yet but we did encounter a lot of these critters, trying to stay warm in the frigid air in the fields along the highway. 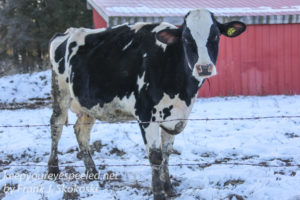 We drove through the historical and picturesque  town of Honesdale.  I learned  this town was an important center for transporting coal first by canal, and then rail, to New York City.  I will return and explore this town again but yesterday we drove on to Damascus township and  the Cochecton – Damascus bridge spanning the gently flowing Delaware River. 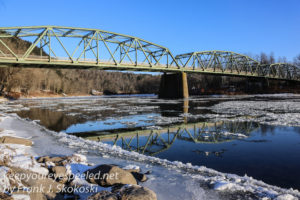 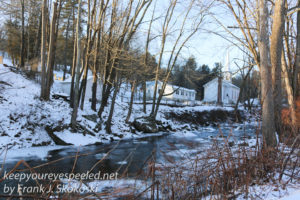 We  parked and walked to the edge of the river in the bright sunshine and the still frigid morning air. The temperature was 11 degrees and  there was some  ice on the river, but I am guessing some years it would be completely  frozen by now.

After exploring the river side for a while we proceeded to drive south on the Pennsylvania side of the river passing some old churches along the way. 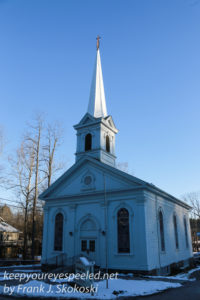 We soon came upon another historic bridge spanning the Delaware River, this one at Skinners Falls. I wanted to get some walking in so my brother and nephew left me off at the bridge and drove back to the Cochecton-Damascus Bridge to meet me on the other side. 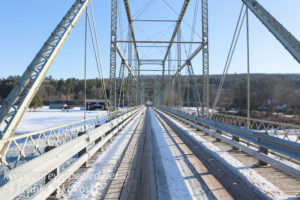 I walked into the state of New York, finding the waters of the Delaware River now frozen below me. 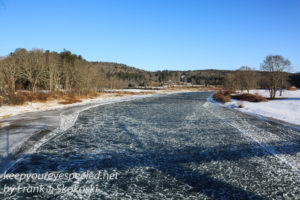 On the New York side I came  across the railroad right of way that brought coal from the mines near Scranton to New York City for many years. I enjoy imagining the men, and women   who road  over these same tracks over for almost 200 years. 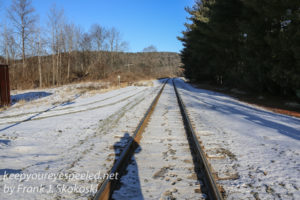 My brother found me roaming the back roads of New York after  only about 15 minutes, excited to tell me they saw a bald eagle in a tree near the bridge on the Pennsylvania side of the river. 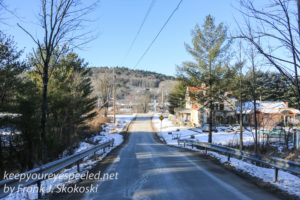 We drove back hoping  it was still there but it wasn’t. We weren’t totally disappointed. We spotted this cooper’s hawk sitting in a tree near the river and spent  some time watching him in the morning sun. 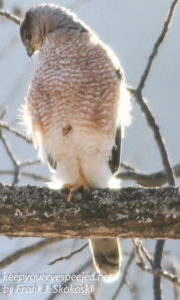 We drove back over the Delaware River to the New York side and drove the road that followed  the river, some times near the river and others further away atop a bluff or hill. 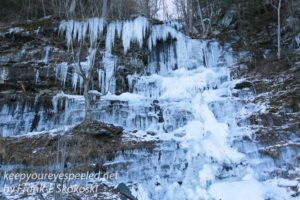 We found a river access road and decided to take it and  explore the area. We drove down to what appeared to be an unpopulated  We loved this isolated portion of the river and spent some time watching the ice float by and taking in the peace and quiet. 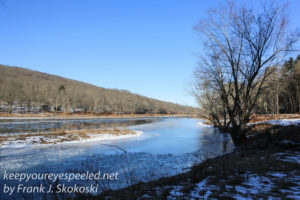 We explored the area and found it wasn’t always entirely unpopulated. We found the ruins of  this old abandoned house along the river. 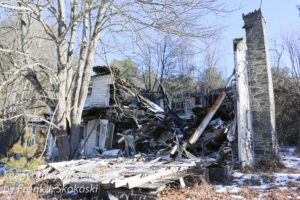 I love exploring abandoned houses and buildings. I imagine who lived here, how it would be like exploring these woods as a child, whether this was a year round residences or a summer house only. So many questions enter my head. 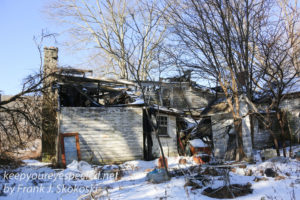 I walked around the ruins and found many objects, such as these canoes, 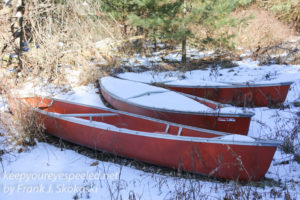 and this abandoned van which fueled my imagination. 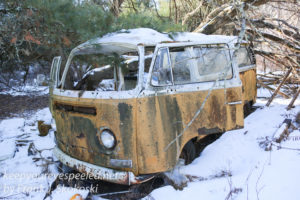 Most interesting was an old PDR, a physicians desk reference, so I am thinking that the owner was a doctor or worked in the health care industry. 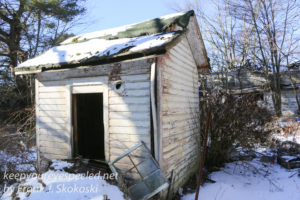 I know this the house was old, well built at one time , and fell into disrepair. The history  and reasons for the unfortunate ending to the structure   have  given my imagination plenty of works these past few days. I hope to get back some day and learn more of this abandoned house and its many  secrets. Here is a link to some more photographs of the house and it’s surroundings. https://keepyoureyespeeled.net/photographs-2017/nggallery/photographs-2017/Delaware-River-abandoned-house-on-river-February-4-2017- 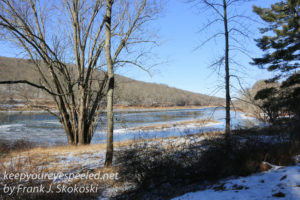 I could have stayed and explored the old house and it’s surroundings for hours but we came to find bald  eagles and I hadn’t seen one yet so we drove  onward down the river, taking in the beautiful scenery, and arriving in another pretty, and historic town along the river, Lackawaxen, and the famous Roebling Bridge. 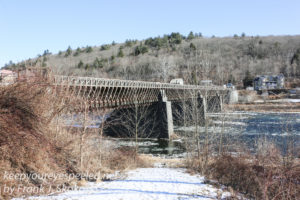 We stopped to explore this historic bridge, built in 1849  as an aqueduct to connect two branches of the Delaware and Hudson Canal. Amazing that it actually transported ships and barges over the Delaware River. We walked out to the center of the bridge and enjoyed views of the river while straddling the Pennsylvania and New York border. 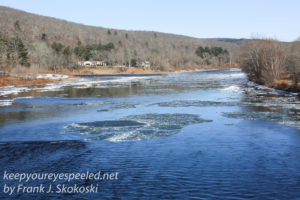 We next walked through the town and learned a bit of the history, including   one  famous resident, Erin Grey, a writer of western novels including the famous Riders of the Purple Sage. We were disappointed to find the home closed on weekends. 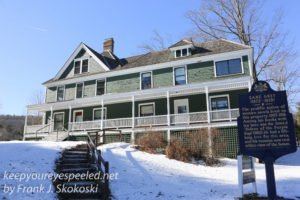 We walked along  the river in this small town and, while my brother and nephew visited a local  outdoor shop,  I was stopped by a passing motorist, who, seeing my camera, advised me of a bald eagle perched in a tree back near the bridge. I quickly found my brother and nephew and ran to the tree, where I was rewarded with the sight of this beautiful bird. 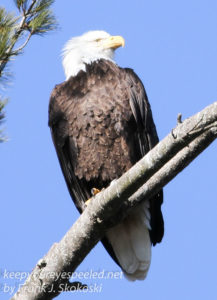 A small crowd  formed, everyone enjoying the sight of this majestic bird perched high in the branches of a pine tree near the river. 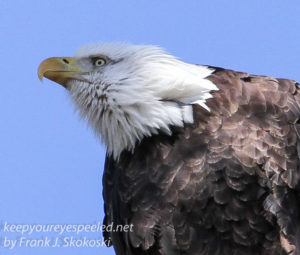 I could have observed the bald eagle for hours but, unfortunately, he or she had other plans, and after about 15 minutes decided to fly off into  to the clear blue skies along the scenic Delaware River. Here is a link to some more photographs of this beautiful bird. https://keepyoureyespeeled.net/photographs-2017/nggallery/photographs-2017/bald-eagles- 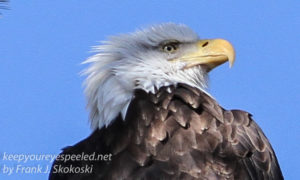 It was now past noon and we decided to take a slow ride back home through the scenic countryside of the extreme northeastern section of our state. On the drive back, we talked about our adventure and the beautiful cooper’s hawk and bald eagle we encountered.  During our conversation I said I would have liked to have seen an owl, and, both my brother and nephew, told me this would be highly unlikely in the daytime. I, jokingly, insisted we would see one, and sure enough as we drove down the highway, I spotted what appeared to be  an  owl perched in a pine tree. My brother had to stop, turn the car around, and return to the tree, and, sure enough we saw this barred  owl enjoying the afternoon sunshine. 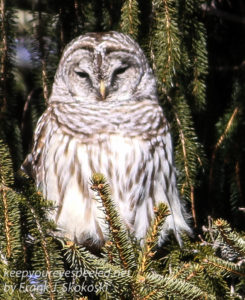 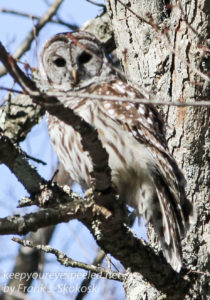 We talked about this interesting, and rare encounter, over a nice breakfast at a nearby dinner. We then took a slow ride home, discussing the beautiful area we explored and planning a return trip, which hopefully will be soon. Here is a link to some more photographs from our trip along the Delaware River. https://keepyoureyespeeled.net/photographs-2017/nggallery/photographs-2017/Delaware-River-February-4-2017 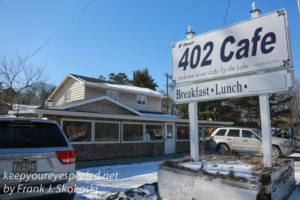 The song of the river ends not at her banks but in the hearts of those who have loved her. — Buffalo Joe