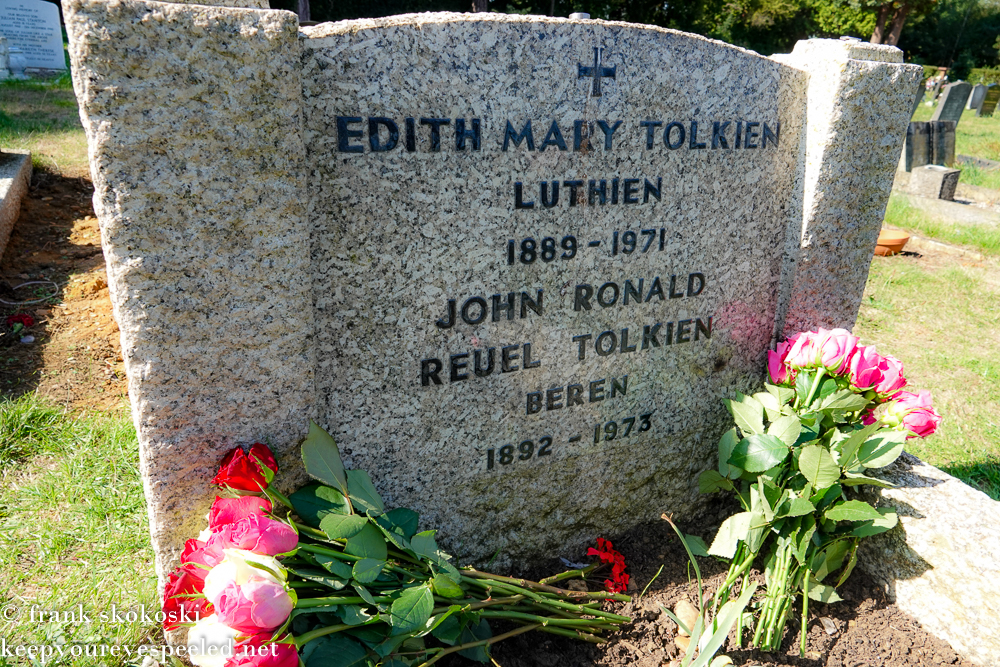 Well, it’s been a while since I  did a blog on my trip to London. It’s  been  busy since my return but I finished this one, so  back to my recent  London adventure.  My last post was my Saturday morning in Oxford. I left off at lunch.  After my  lunch at the Bear Tavern in Oxford Saturday afternoon I  was off to try and find the grave  of my favorite author  J.R.R. Tolkien. I knew he was buried near  Oxford  where he was a professor for many years. But I had no idea where the cemetery was. I  learned, from a security guard at Christ Church College,  it was in the nearby town of Wolvercote and was told a local bus could take me there. So I left the Tavern and made my was to the bus terminal., walking through the now crowed streets of Oxford. 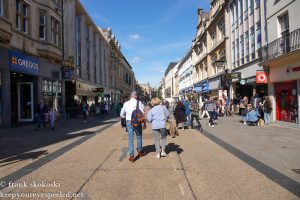 I made my was to Cornmarket Street, a pedestrian street lined with craft store  shops and restaurants. It was bustling with students, locals and tourists. In addition to the noise from the  crowds,  street musicians provided all sorts of musical entertainment. 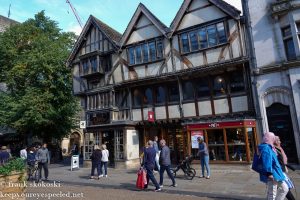 My walk took me  past the  shops and restaurants and I also discovered also more of the history Oxford  when I walked past another stone tower, the Saxon Tower at St. Michael’s Church which was also over a 1000 years old. 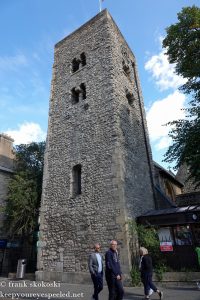 At the end of the pedestrian street I came to  to A4144,  a major road  exiting Oxford. By chance I found  a bus and asked the bus driver if he was  familiar with J. R.R. Tolkien ‘s grave and how to get there. He told me in was on his route!. I happily  boarded the bus and enjoyed my luck and  the 3 mile drive observing  the suburbs of Oxford. 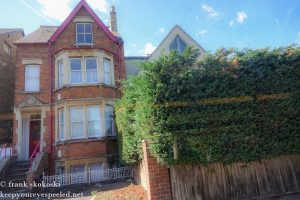 The bus dropped me off  near the  entrance  to the cemetery.  I was soon inside walking past the graves looking for the grave of J.R. R. Tolkien. I had some difficulty finding it, and met another young couple who were also searching for the grave site. 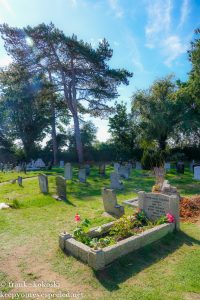 The young lady found it and I joined them as we stood in awe before the resting  place of this man who created an imaginary and beautiful world now known and loved by billions of people  all around our planet. 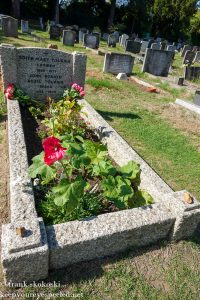 The young couple left after s few  minutes and I stood  alone next to the final resting place of his great author who I admired most of my life.  I read, re-read  and enjoyed his books since  I was a young man.   I am not ashamed to admit tears flowed when I reflected on the names Beren and Luthien etched on the stone above his and his beloved wife’s names.  In my opinion,  the  tale of Beren and Luthien  he wrote is one of the greatest love stories ever told. 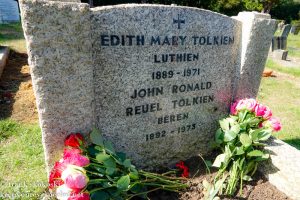 I remained in the cemetery for a while reflecting on the first time I read the Hobbit, and then the Lord of the Rings when in high school. In college I read the Silmarillion and the amazing story of Creation it told. I recalled the many hours I roamed the woods of my home in Northeastern Pennsylvania reliving the adventures of the hobbits of the  Shire . His writings had  had a great influence on me and the adventures I would take during my life.   I left the resting place of my favorite author and his beloved wife and walked back to the bus stop having crossed off another item on my bucket list. Here is a link to a gallery on my blog website with some more photos from my visit to Tolkien ‘s grave and  Oxford. London Day Three Oxford, J.R.R. Tolkien grave September 17 2022. 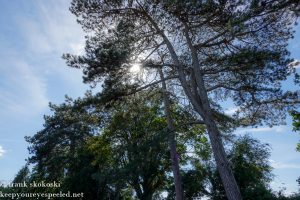 On my three mile ride back to Oxford, I sat in the top of the the famous British double decker  bus and enjoyed the scenery on this beautiful Fall Day. . 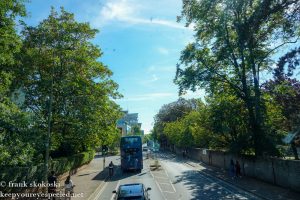 It was around 2 pm. when I arrived  on the outskirts of Oxford. I  walked through the busy streets and back to Christ Church College  for my 2;30 p.m. tour The brilliant  Autumn  sunshine was splendid.  I enjoyed walking the famous old streets of the University town. 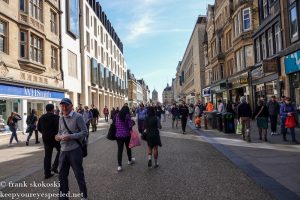 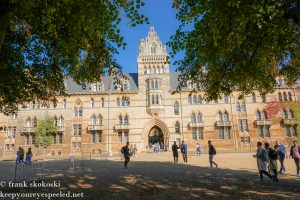 The tour was self-guided with a state of the art  multimedia guide.  I began my tour at the arched old entrance to the College, I learned a lot about the history of the college as I followed the guide’s  instructions, 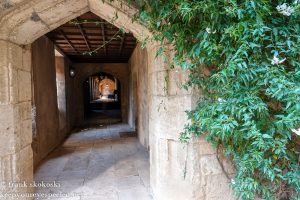 It took me to a large staircase, 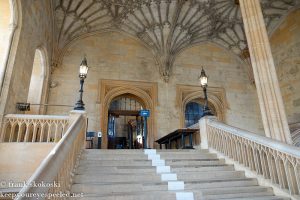 and  into the Christ Church Hall. It is one of the largest dining halls in Oxford and was the inspiration the great dining hall in the Harry Potter movies.  It was spectacular. 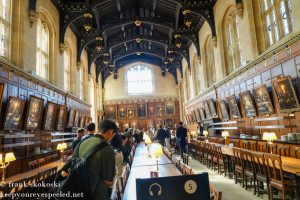 On the walls surrounding the long benches in the hall are  paintings of famous alumni of the college.  I listened to the information on  the multimedia guide as I admired the beauty of the dining hall. 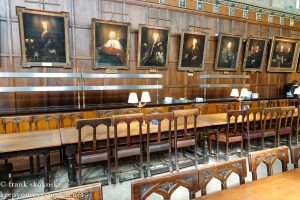 I left the dining hall and made my way to Tom Quad or the Great Quadrangle. A quadrangle is  open space or enclosed courtyard surrounded by building and common in British colleges and universities. It is the largest quad in Oxford. 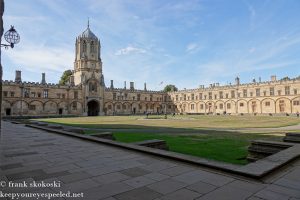 One one side of the Quad is the famous Tom Tower, a large bell tower designed by the famous architects  Christopher Wren. It is the loudest of the many bells in Oxford. 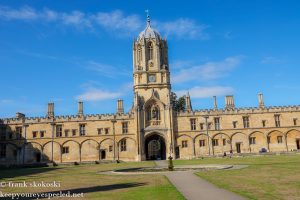 Across from Tom Tower is the also famous Christ Church Cathedral. It was not open to the public or on the tour because of the death of the Queen. 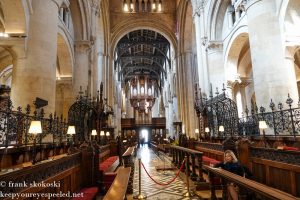 However, the Cathedral was open to visitors who wished to pay  their final respects to the Queen which I did on my morning walk and forgot to include in my prior blog. 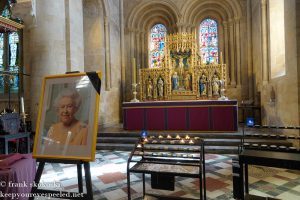 The Cathedral was beautiful. 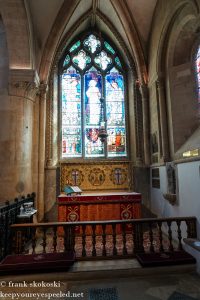 As in all the churches I visited during my stay in London there was a portrait of the Queen and a condolences book. 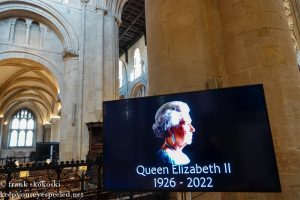 A beautiful service was being conducted during my visit. 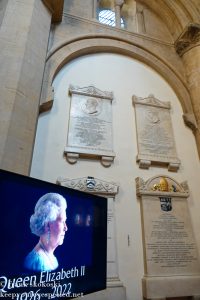 After paying my respects to the Queen and signing the  condolences book I left the Cathedral and continued my morning walk. 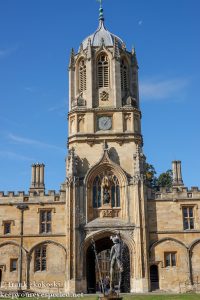 So back to my afternoon tour, I left the Quad and visited the oldest part of the College, the original wall from a priory that was built in the 12th Century. 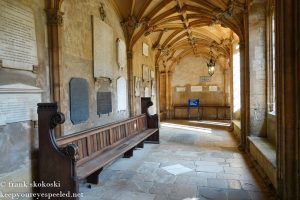 I ended my tour of  Christ Church College through the ancient stone corridors. It was an informative tour and it was only one of the many colleges in the city I hope to return and visit more of this quaint university town and it’s long and  famous history. Here is a  link to some more photos from my visit to Christ Church College.  London Day Three Oxford Christ Church September 17 2022. 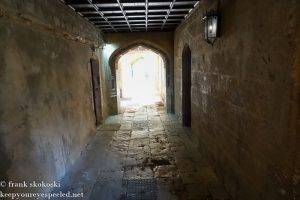 After  leaving the college  I hurried back to the train station to catch the 3:30 train back to London .It was a nice reflective ride. I was thinking about how often J.R.R. Tolkien may have rode this train.  When I arrived in London  I took  the “tubes” back the King’s Cross Station and made it back to my hotel shortly after 5 p.m. 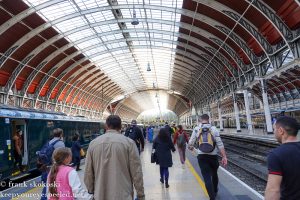 This gave me just enough time to shower, change and make my 6 p.m. dinner reservation at the North Sea Fish restaurant. I enjoyed my meal here the previous night so I decided to  return. I had another delicious meal of whole dover sole, boiled potatoes and broccoli. 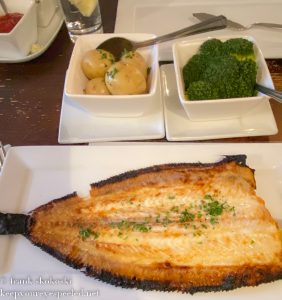 And, since I had walked over 8 miles I had a warn apple crumble for dessert. It was also delicious. It was another pleasant  evening walk back to my hotel. i was again exhausted . However, I again had trouble sleeping but still looked forward to the morning and crossing off another item on my bucket list. 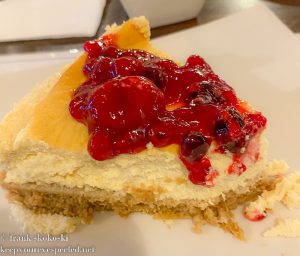 “The Road goes ever on and on down from the door where it began. Now far ahead the Road has gone, and I must follow, if I can”  J.R.R. Tolkien 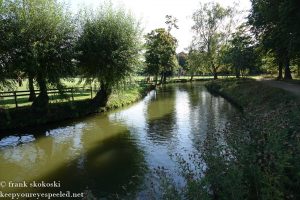