Memories On An Easter Morning Walk.

Memories On An Easter Morning Walk. 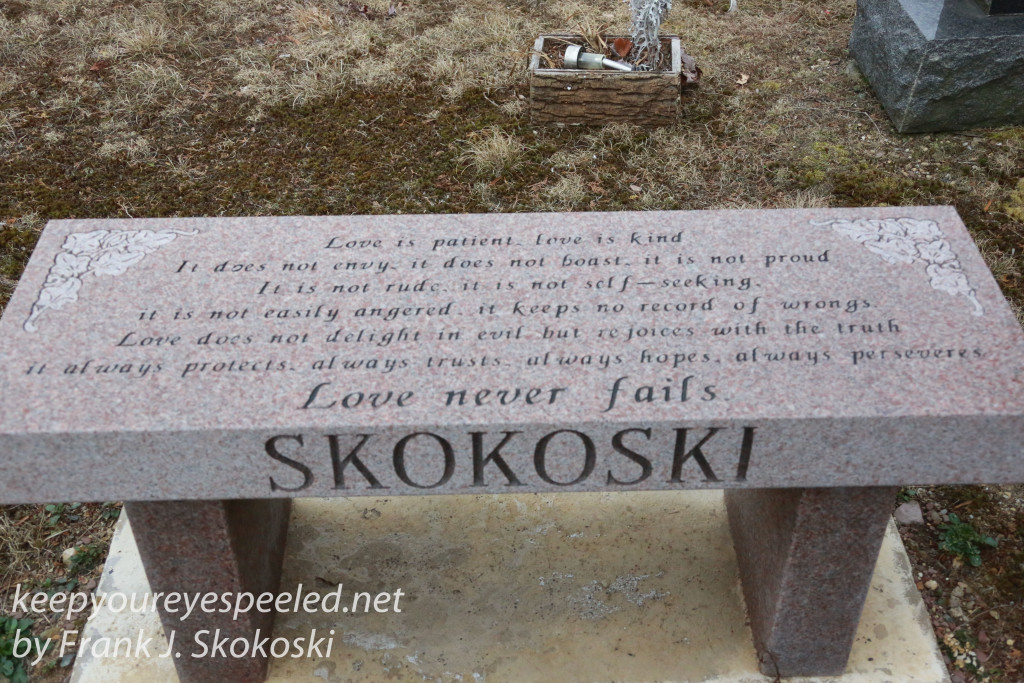 Good morning folks. This post will be of more interest to my friends and followers near my home,  in  the Green Ridge section of Hazle Township and West Hazleton, but you’re all welcome to read along.

In years past I would visit my dad early on Easter morning and would spend time sharing a cup of tea and an egg and horseradish from the blessed Easter basket. We lost dad two years ago, and Easter will never be the same for me.  My mom isn’t an early riser, so I decided to take a reflective morning  walk through what used to be my old stomping grounds. They have changed considerably these past few years but I still enjoy walking the old paths. 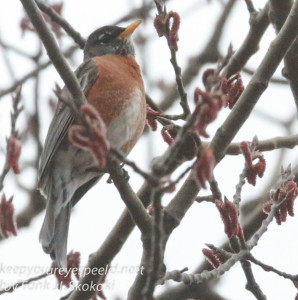 It was a cloudy, damp,  windy and cold  morning here in Northeastern Pennsylvania but there were still signs of Spring, such as the budding pussy willows and the singing robins. 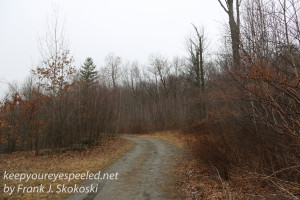 I walked down the old black road that led to the coal mines and “strippins”  and which I walked almost every day as a child.  It still leads to remains of the old strip mines we called “doogie dams”. We spent many a Spring and Summer morning down here looking for tadpoles, frogs and salamanders. And, much to our peril, played hockey with sticks and cans on the frozen ice in the cold of Winter. I kicked up a mallard on the water as I walked past on this gray Easter morning. 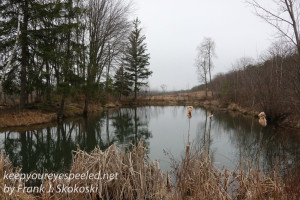 As some of you may know from past blog posts, there was a massive reclamation project here a few years ago. Gone  were once deep strip mines, culm banks and acres of black coal silt, now  replaced with  fields of  thick reeds, grass and young saplings. 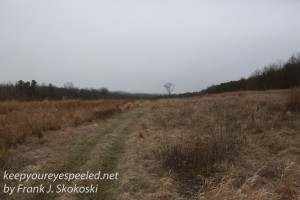 There are some wetlands in the area, where the old Cranberry Creek used to flow. It’s headwaters now are diverted into the mines through  the Jeddo tunnel. In our day  black creek or  “s–t’ creek flowed here, discharging raw sewage from the towns and villages before a central sewer system was put in place.  I will admit we explored and played in those filthy waters  many a day.  Yesterday  saw a few red winged blackbirds, robins and a lot of sparrows  in these remaining wetlands on my walk. 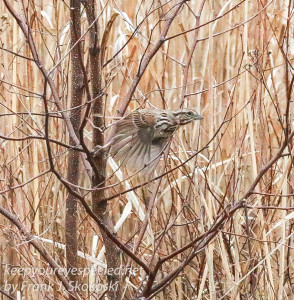 I walked through the reclaim area and on  to the railroad tracks.  In my childhood days  the other side of the tracks , the southern side near  the “patch towns” of Cranberry and Harwood, were many   deep strip mines and culm banks, including the largest we  named “flat top” or “killer’. The memory of our first ascent upon this mighty mountain, as ten year olds, is so vivid in my mind it seems like it occured last week. I so wish I could have climbed it yesterday , as I did for decades, and reflect on the happy days roaming these strip mines and slate  banks. The old telegraph booth, once standing along the tracks, is about all that remains from those good old days. 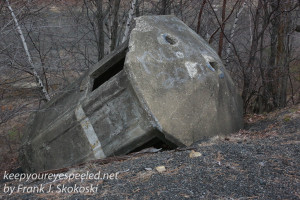 I walked westward  along the tracks unt and under what were once large steel tower lines. We picked many  quarts of blueberries or “huckleberries’ under those towers on cool summer mornings. The steel tower lines  were also replaced metal poles a few years ago. 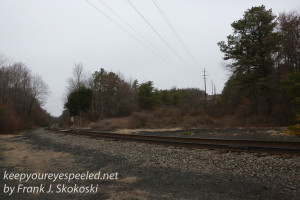 I walked along the old black road and past what we called the “Indian rocks’ . We discovered this large rocks and spent many  days admiring the view from atop or playing in caves underneath these massive boulders. It seems like yesterday when, in fourth grade, I hiked out here, alone, to compose a poem assignment, on a cool Fall day long ago. Memories. 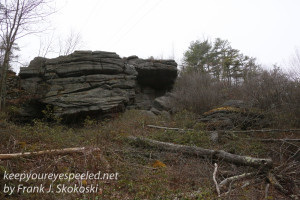 I walked to interstate 81, which just opened shortly before we began our explorations of these areas. I walked along a gas and sewer line that wasn’t there when we in grade school, but which I hiked for many years after it was built when I was in high school. I found some more signs of Spring growing along the trail including a lot of coltsfoot in bloom. 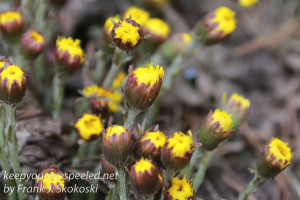 The sewer and gas ran next to  the interstate, and along the banks of some streams that bubbled out from the mountains near the railroad tracks.  We drank from these springs as kids although I wouldn’t feel safe drinking the water today. 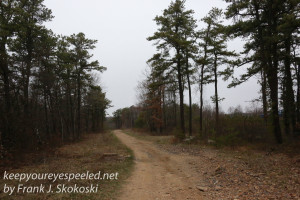 The path ended at the Valmont Industrial park, where the stream we knew as Shiny Creek entered the other stream I was following. This is where we would cross the interstate to visit another Green Ridge landmark, the famous White Rock strip mine and swimming hole. What memories. But that will be another post. 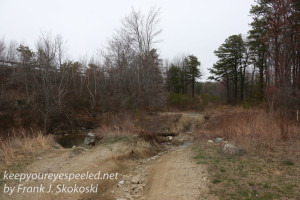 I decided to hike the rails out to the old ‘mile high’ bridges that crossed the waters of the other, much larger, Black Creek, I have posted a few blogs on these bridges, and, you can find them in my tags or archives. Again so many memories out here. 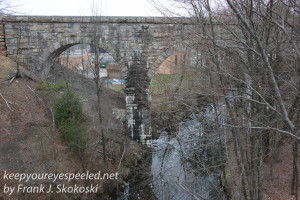 I turned back east now and walked the rails through the Valmont Industrial park and to the familiar woods of my property.  There used to be an active railroad track out here. It ran along the old  right of way of the Wilkes Barre Hazleton Railroad, also known as the ‘third rail” tracks.   When I was in high school,  there was always people walking along the railroad tracks. Kids exploring the woods, , senor citizens, folks walking their dogs and teenagers drinking , it was  like the mall is now. Not yesterday. Not a person passed me on my entire hike. The railroad tracks have been removed and the right of way is  now heavily eroded. Still the memories remain. 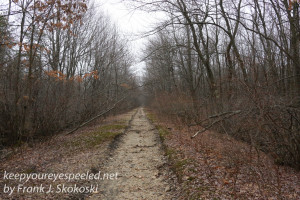 I walked the old railroad right of way to the baseball fields, we called them the “lower fields, below my alma mater,  the old West Hazleton high School, now an elementary school.  What a wonderful school. We had the best teachers.   Some of the best days of my life occurred while attending that school. Memories. 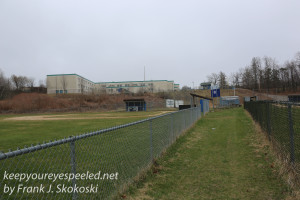 I walked up the hill and walked through the Mountain View Cemetery. I made one last stop before I headed home, I was their earlier that morning, but I  sat down and shared those memories with my dad. I know he is still with us, in spirit, but I still miss him so much, especially on holidays, and Easter morning was one of his favorites. Memories are a good thing.  Here is a link to some more photographs from my Easter morning hike. https://keepyoureyespeeled.net/photographs-page-2/nggallery/photographs-page-two-blog/green-ridge-railroad-hike-march-27-2016 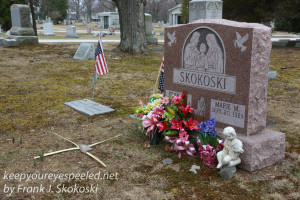 “The worst part of holding the memories is not the pain. It’s the loneliness of it. Memories need to be shared.” 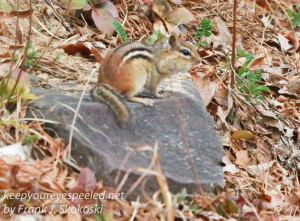