New Zealand Day Thirteen: Sunrise At Signal Hill And A Pleasant Walk Back To Dunedin

March 22, 2019 / fskokoski@gmail.com / Comments Off on New Zealand Day Thirteen: Sunrise At Signal Hill And A Pleasant Walk Back To Dunedin

New Zealand Day Thirteen: Sunrise At Signal Hill And A Pleasant Walk Back To Dunedin 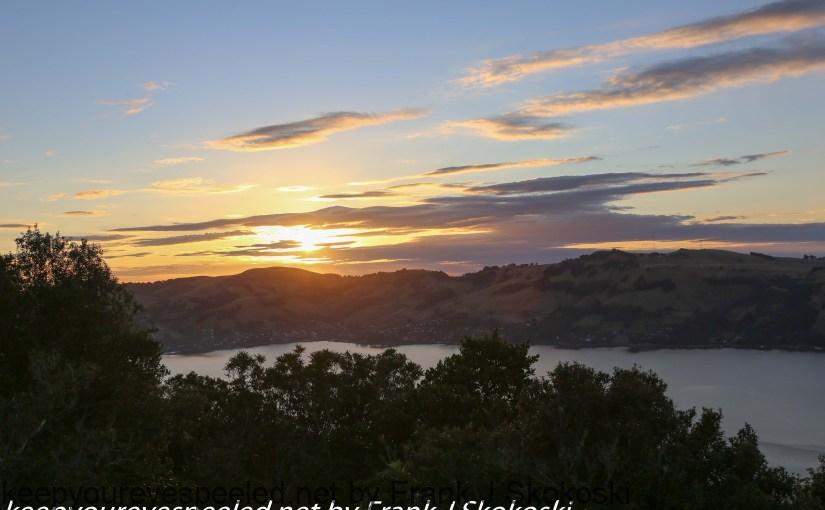 The drive was quicker than I anticipated. I had about 1/2 hour until  sunrise.  Of course, this was fine with me as it gave me a chance to explore the grounds and monument atop Signal Hill. It consists of two bronze statues, one representing ‘history’ and the other the ‘thread of life’.

As the sky lightened with the approaching sunrise I was joined by a student from the University of Otago. He had run up the mountain to watch the sunrise too. I learned he was an exchange student from California and we had a pleasant conversation about, life, travel and the state of our small planet.

There were some clouds obstructing the rising sun. And the sun rose on the southeast over the Otago Peninsula and not the Pacific Ocean. It was still a beautiful sight. Sunrises always are. I stood and watched its early rays shine on the awakening city below.

After about ten minutes I began the five-mile hike back to my hotel. I followed the road we drove up on. It was wooded for about the first half mile. I was the only one walking or driving on it. It was peaceful as I listened to the songs of the birds.

The road soon passed some farms and ranches.  A few friendly sheep greeted me along the way.

As well as a noisy goat.

A few houses were along the wooded and rural surroundings as I descended the mountain.

The views of the surrounding hills and mountains were beautiful, especially in the morning sunshine.

There were a number of bell birds in the trees along the road.

I gradually came down into a suburban residential area. The houses were all well maintained and many had flower gardens. I would have to be here in the Spring.

I now started to see some traffic on the road. People were also leaving their homes for school and work.

I continued down the hill and  came to   the botanical gardens.

If you have been following my blogs post from my travels you would know this is one of my favorite place to visit in a city.

The Dunedin botanical gardens were arranged in geographical sections containing native  plants from many regions of the world.

I roamed through these sections taking in the beautiful and exotic flowers,

All of the native species  of trees, plants and flowers were beautiful.  I learned so much. One of my favorite sections was the cedar trees of Lebanon.

I have heard stories about this trees from my parochial school days and I now had the opportunity to see them in New Zealand.

There were many birds in the gardens too, including this silvereye.

I walked to the lower section of the gardens and found this interesting sculpture of the lowly earthworm.

There was also another rose garden in full bloom.

There were now many tourists, residents and students walking on the many winding trails in the gardens.

One of the busiest trails followed  a stream leaving the park and I  followed it down to the Otago University Campus I visited the day before. Here  is a link to some more photographs from my walk through the gardens New Zealand Day Thirteen Dunedin Botanical Gardens. February 18 2019.

I walked through the campus again.  The parents were now gone and it looked like it was the first day of class. I again walked by the many beautiful classroom and administration buildings on the campus.

This time I followed another street into the downtown of Dunedin. One could see many of the business catered to the students.

I was late morning when I arrived at my hotel. I enjoyed a very large, and delicious  breakfast. Once again I only had time for a  quick shower and a short rest. My next tour was a noon. I was going to try  find a yellow-eyed penguin! Here is a link to some more photographs from my hike from Signal Hill. New Zealand Day Thirteen Signal Hill hike February 18 2019.

“God made a beauteous garden
With lovely flowers strown,
But one straight, narrow pathway
That was not overgrown.
And to this beauteous garden
He brought mankind to live,
And said “To you, my children,
These lovely flowers I give.
Prune ye my vines and fig trees,
With care my flowers tend,
But keep the pathway open
Your home is at the end.”
God’s Garden”
― Robert Frost