Spring Returns To The PPL Wetlands, And With Many Birds That Left Us Last Fall.

Spring Returns To The PPL Wetlands, And With Many Birds That Left Us Last Fall. 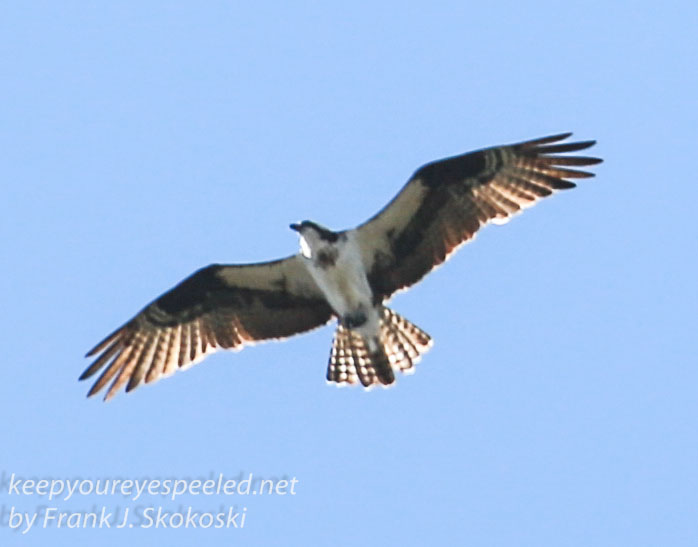 The melting snow and recent heavy rains caused the local streams, creeks and river to swell here in Northeastern Pennsylvania. I wanted to take a look at the Susquehanna River at the PPL Wetlands , thinking  the high waters may attract some of the migrating water fowl that pass through, or  settle to nest,  in our area in the Spring.

It was cold when I arrived at the wetlands, with a temperature  near the freezing mark at 33 degrees. 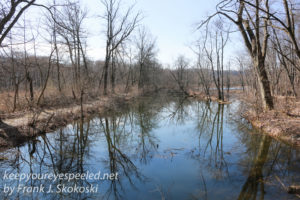 All of the snow and ice had melted  and I knew the early April sun would warm it up quickly.  My hunch  about the water fowl was  correct. I immediately noticed a number of flocks of ducks and a few geese on the pond near the entrance to the wetlands. I believe these were, mainly,  ringed neck ducks. 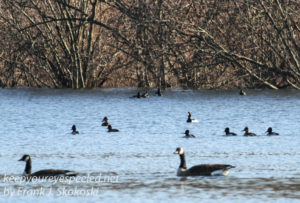 As I watched the ducks and geese I also saw a number of, what I believe are, rough winged swallows  skimming above the water in search of insects. I  captured a photograph of  this one taking an early morning  dip. 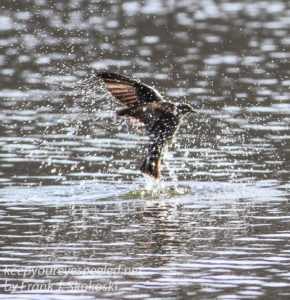 After which he/she perched in a tree to dry off. 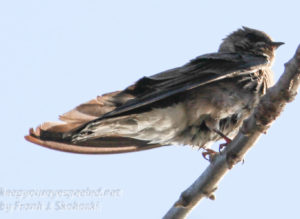 I hiked into the paths of the wetlands and discovered a few signs of Spring including the new growth of the duckweed. This will turn the waters of the wetlands a dark green by the need of summer and provide food and cover for many types of critters. 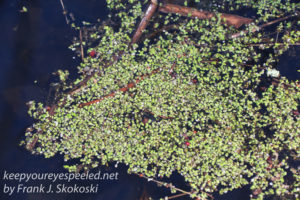 There were also clumps of wild garlic or onion grass growing along the paths throughout the wetlands. 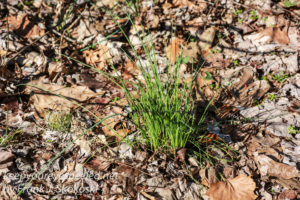 Unfortunately I didn’t wear my muck boots and found my access to some of the trails blocked by the overflowing waterways, canals and ponds. 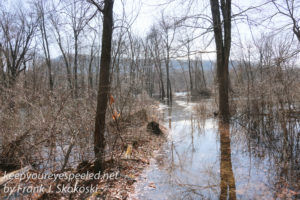 Many of the skunk cabbage, which had just recovered from the heavy snow cover,  were now growing were under a few inches of water. 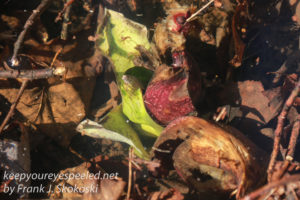 As I walked under the large and ancient trees I heard the flapping of wings overhead. I couldn’t tell  immediately what the bird was,  until I saw two blue herons flying away before I could get a photograph.  I was able to photograph this red bellied woodpecker in a nearby tree. 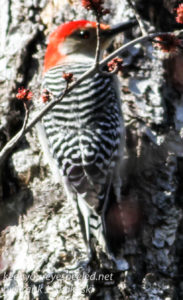 I saw another year round resident in the wetlands , this blue bird. 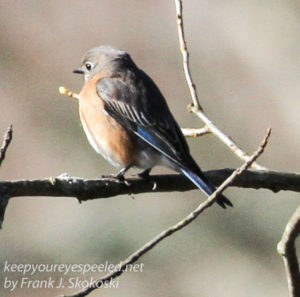 The early April sun was warming the air and I started to hear the occasionally sound of a spring peeper. Also taking advantage of the sun was this garter snake that slithered into the woods before I could take a photograph. 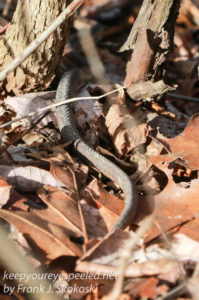 And the turtles soon appeared on the logs and banks of the ponds and canals, a sure sign of  Spring. 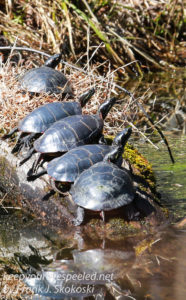 I continued my walk from the wetlands area of the preserve to the riverlands and beautiful Lake Took-A-While. 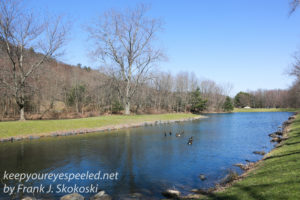 I found a number of new residents including  geese,  ducks and a few cormorants that  alternated from skimming the lake and flying overhead. 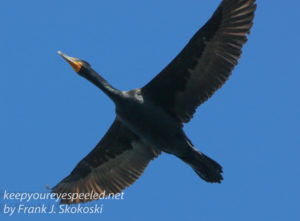 While looking at the cormorants I spotted a  beautiful osprey that appeared to be hovering in the air, looking for a fish for breakfast in the waters of Lake Took-A While. Here is a link to some more photographs of this magnificent bird. https://keepyoureyespeeled.net/photographs-2017/nggallery/photographs-2017/Osprey-PPL-Wetlands-April-2-2017 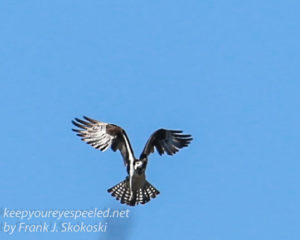 I watched this beautiful bird for a while and decided to head back to the wetlands. On the way I found this pair of, I believe, blue-winged teals, who also appeared to be looking for  a quiet place to build a nest and raise a family. Here is a link to some more photographs of these attractive ducks. https://keepyoureyespeeled.net/birds-of-pennsylvania/nggallery/birds-of-pennsylvania/Blue-winged-teal- 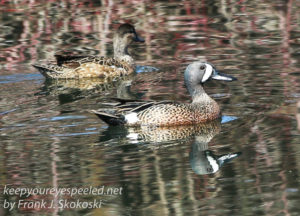 The air was now filled with the songs of birds, perched high in trees, singing to attract a mate, such as this male cardinal, 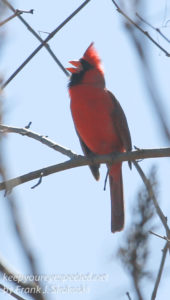 And this song sparrow. 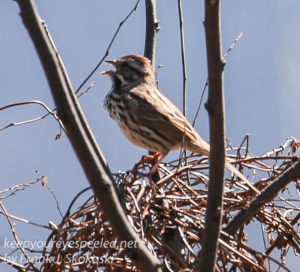 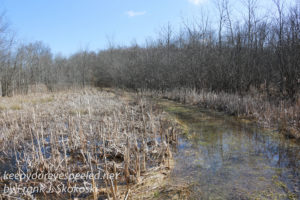 I next walked to the path along the Susquehanna River, where I sat and watched the rapidly flowing waters and the many species of  ducks floating past as they took a free ride south, including wood ducks. Here is a link to a video I uploaded to YouTube. https://youtu.be/YzpS2VxbK_M 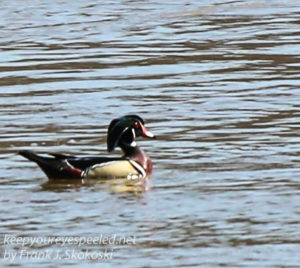 As I returned to my car I saw this red tailed hawk soaring high overhead, probably, like me,  looking at all of the ducks, but with different intentions. 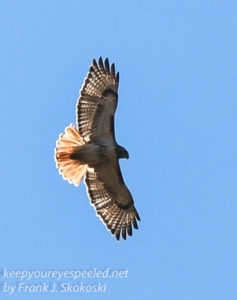 I returned to the flooded ponds, again scaring the many ducks and geese that were enjoying the warm April sunshine.  Here is a link to some more photographs  of the birds and wildlife I saw on my hike. https://keepyoureyespeeled.net/photographs-2017/nggallery/photographs-2017/PPL-Wetlands-wildlife-April-2-2017 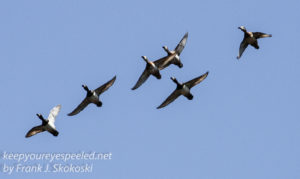 It was nice to again see the wetlands coming to life after it’s rest this past winter. Even though it was a mild one, except for the last snow storm, I still enjoy the next three seasons much better than the last one. And I look forward to the the warm weather ahead and the rebirth it will bring to the woodlands of Northeastern Pennsylvania. Here is a link to some more photographs from my hike in the wetlands on Sunday. https://keepyoureyespeeled.net/photographs-2017/nggallery/photographs-2017/PPL-Wetlands-April-2-2017- 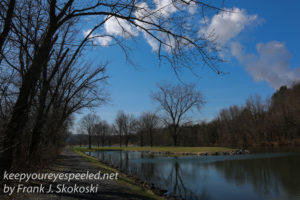 For many of us, water simply flows from a faucet, and we think little about it beyond this point of contact. We have lost a sense of respect for the wild river, for the complex workings of a wetland, for the intricate web of life that water supports.  Sandra Postel 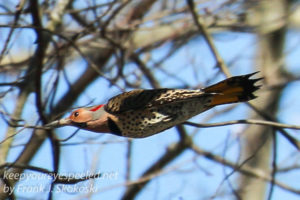