Sunshine, And Some Ice At The Lehigh River Gorge

January 27, 2021 / fskokoski@gmail.com / Comments Off on Sunshine, And Some Ice At The Lehigh River Gorge

Sunshine, And Some Ice At The Lehigh River Gorge 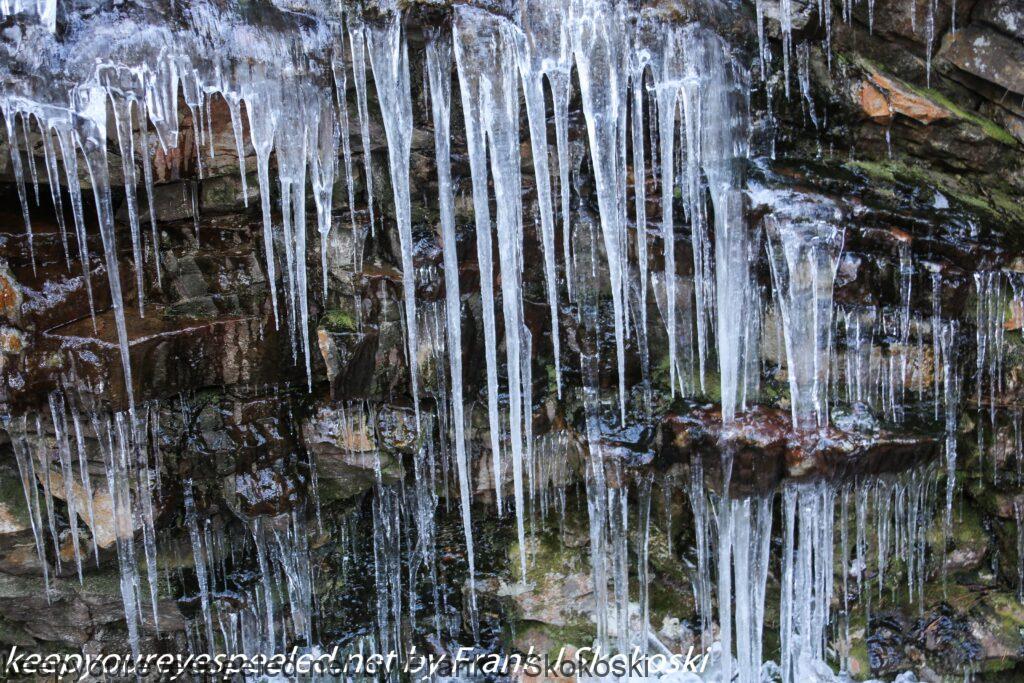 The cold air that started to filter in Northeastern Pennsylvania on Friday, settled  in  Saturday night.  I awoke on Sunday morning to  clear blue skies, a strong wind  a frigid, but average in these parts,  18 degrees. I decided to return to the Lehigh River Gorge in Rockport to see how much  ice  had formed on the cliffs and rocks of the gorge  with the arrival of colder temperatures. 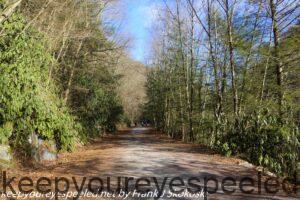 It was sunny and a  cold 20 degrees  when I arrived  at the Rockport access to the Lehigh River. The sunshine gave an entirely different  look to the trail compared to the cloudy conditions of the prior week.  And this week there were already a half dozen hikers on the trail ahead of me. 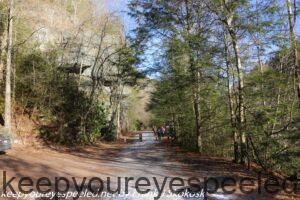 When I hiked here the week before I was surprised to find almost no ice formations on the cliffs and rocky ledges that surround the river. This is very unusual in January. Most years  icicles and columns of ice formations appear.  On Sunday I found the  return of the cold weather had already started to transform the  flowing and dripping water into  some  ice in the gorge. 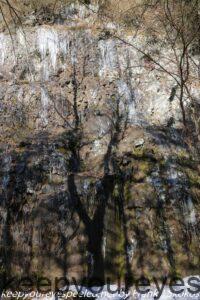 Heading in  a northeasterly direction from the parking lot there are sheer cliffs along the trail. The water flowing over the cliffs usually produce huge pillars and columns of ice.

The have already  started to form and, with the arctic temperatures predicted for this week, should continue to create spectacular ice sculptures, hopefully by next weekend. 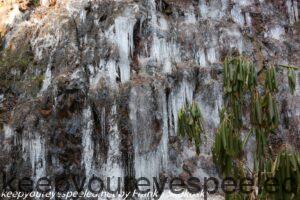 I once again followed the trail out to Buttermilk Falls, 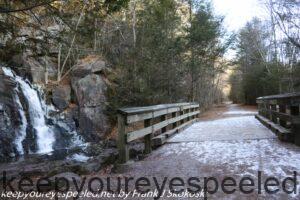 where I stopped to admire and listen to the rushing waters in the cold  January sunshine. 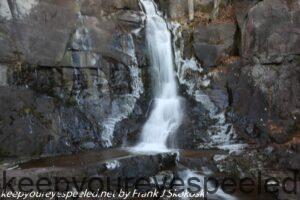 I retraced my steps and headed back to the parking lot and hiked south on the trail. Here I found more snow on the trail since the hillsides of the gorge block the sun. 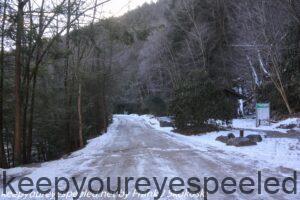 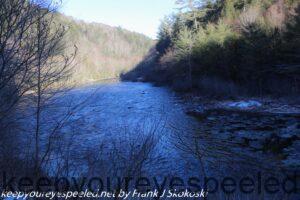 Where the waters slowed, around a bend in the river, ice was already forming on the river. 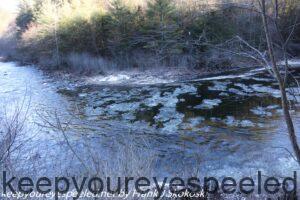 I continued my hike along the river, stopping again to enjoy Luke’s Falls, another waterfall on the trail. 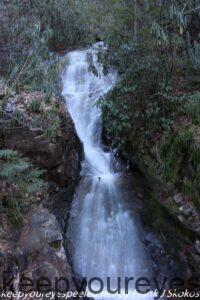 The  leaves on thick growths of rhododendrons along the trail had curled from the frigid temperatures. 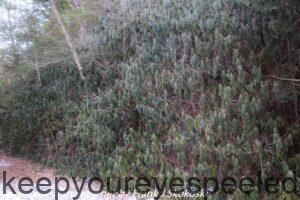 I walked along the trail surrounded by mostly hemlock and yellow birch trees, although their are some maple, oak and beech intermixed in some areas. 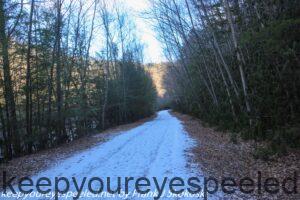 Like the week before, and many other hikes in the Lehigh River  gorge, I saw no wildlife on my entire 5 mile hike, not a sparrow or squirrel. And I heard one bird I couldn’t identify chirping in the rhododendron thickets, staying well hidden in the leaves. I am not sure why there is so little wildlife here, but I seldom see any on my hikes. 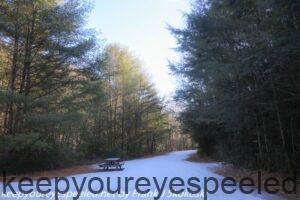 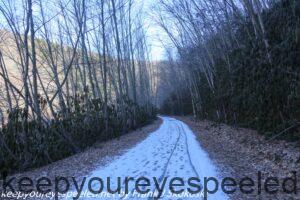 Some of the streams that flows off of the hillsides along the trail were just starting to form some ice, 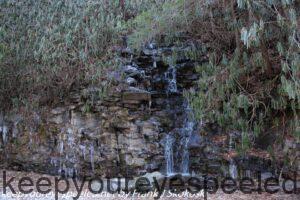 while others, that  flowed  more slowly, or were in the shade, 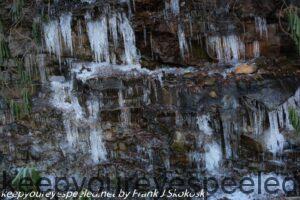 were already covered in ice formations and icicles. 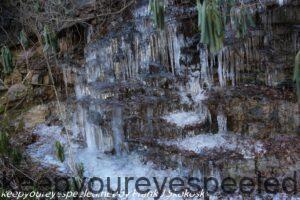 I hiked about 2 miles on the trail , enjoying the sounds of the river and watching the sun cast shadows through the trees. 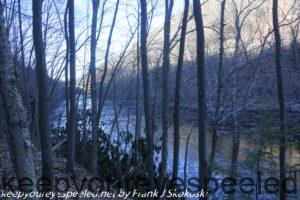 I saw no  wildlife, or any more hikers, on my return walk  either. 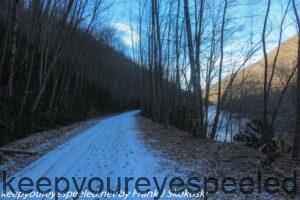 However upon returning to the parking area I saw a number of  parked vehicles . I guess these folks decided on the trail exposed to the sun.  But  I had no complaints with my frigid hike along the river. It was peaceful, as it always is ,regardless of the weather. 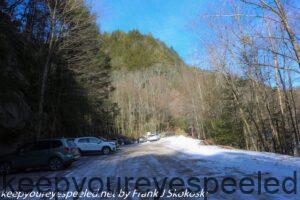 I’m expecting their to be even more impressive ice formations in the gorge next week and  I will be there to find out. Here is a link to a gallery with some more photographs from my hike in the Lehigh River Gorge. Rockport Lehigh River. January 24 2021. 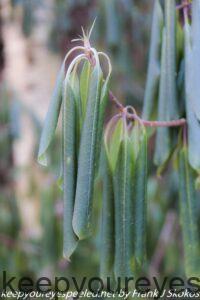 Is not January the hardest month to get through? When you have weathered that you get into the gulf-stream of winter nearer the shores of Spring.— David Thoreau Journal, 2 February 1854