Exploring The Backroads Of North Dakota, Well I Guess They're All Backroads Up Here, But They Sure Are Worth Exploring.

Exploring The Backroads Of North Dakota, Well I Guess They're All Backroads Up Here, But They Sure Are Worth Exploring.

It was cold 39 degrees and a cold wind coming off the lake the town is named after. The name, in my opinion,  is unfortunate since it was a misinterpretation of the Native America words for “Spirit{ and “bad” because the water was not drinkable, The settlors came up with the name Devil’s Lake. But whatever the name it is still a lovable little town. 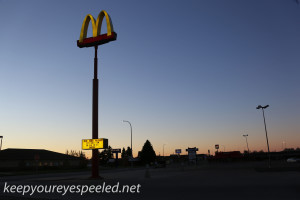 I walked past the usual fast food and commercial establishments on along  Route 20, which was surprisingly busy for a small town.  I crossed, with some difficulty, when I was attracted by a  very unique Veterans memorial and nearby park. 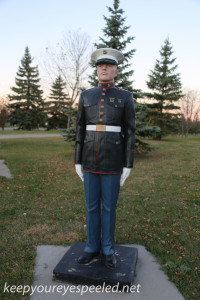 I crossed under a major railroad tracks, they connect every town up here and was lucky enough to watch on of the many long trains, probably carrying grain. 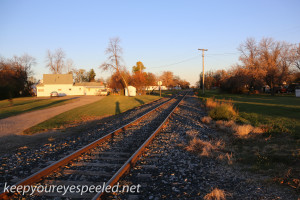 I walked through the town and found the large grain processing facilities which tower over ever town I’ve visited in the state. 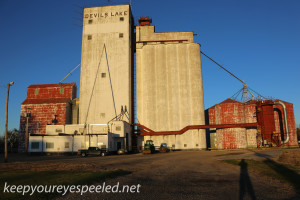 I walked through well maintained streets with stately trees, mostly cottonwood, I think. I  wanted to get to the cemetery but had to get back since I had a long day planned. Here is a link to some more photographs of my walk through the town  https://www.keepyoureyespeeled.net/north-dakota-trip-photographs/nggallery/north-dakota-october-2015/devils-lake-morning-walk-october-15-2015.

I left the Fireside Hotel, very friendly staff and nice rooms, most reserved by the many hunters whom I met at breakfast. I headed back to Devil’s Lake and visited the Sully’s Hill National Wildlife preserve.  Even thought the visitors center was closed for the season I enjoyed a nice ride through the rare North Dakota forest and encountered some buffalo crossing the road. 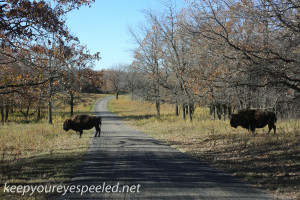 And  I spent some time a prairie dog watching the activities at a prairie dog colony before I had to move on. Here is a link to some more photographs from the preserve. https://www.keepyoureyespeeled.net/north-dakota-trip-photographs/nggallery/north-dakota-october-2015/north-dakota-sullys-hill-national-wildlife-preserve-october-15-2015 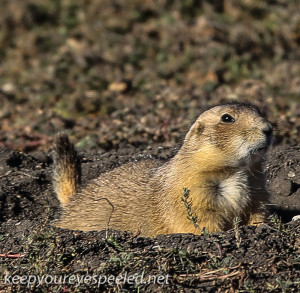 I drove to Fort Totten, an old army fort built in the 1860’s  and than used as a school  for the Native Americans living on the Spirit nation Reservation in which the fort is located. I originally planned at staying at the bed and breakfast in one of the old building but it closed for the season. I found the fort closed too but was able to walk the grounds.   Here is a link to some more photograph from my visit to the fort. https://www.keepyoureyespeeled.net/north-dakota-trip-photographs/nggallery/north-dakota-october-2015/north-dakota-fort-totten-october-15-2015 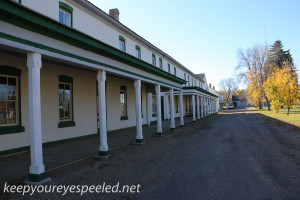 I headed north on  the rural route 281 again driving through the endless fields of grass and grain and the bare newly harvested fields exposing the fertile black soil of North dakota. 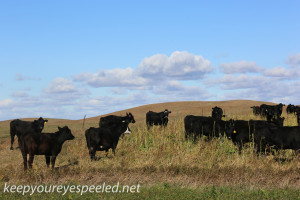 I got on the major east/west highway, Route 2 and, needing gas got to visit another quaint town of Leeds, built in the same mold as all the others. a post office, some small stores and shops, a large grain mill and very friendly folks who, seeing my camera immediately asked who i was and why i was there. 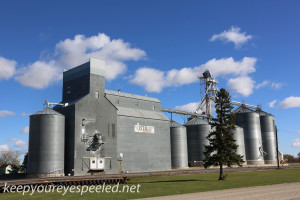 Ever helpful with directions, sights to see, local history and a genuine interest in me and where I’m fun, you could spend hours conversing  they sent me to the gas station which was on Route 2 a 1/2 mile ahead of where I exited. 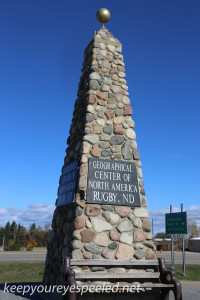 I then made it to the famous town of Rugby, the Geographic Center of North America. i didn’t know this until i planned the trip.  Feeling I was in a remote part of the country, it’s hard to realize how large, and beautiful this world is. I had a nice lunch in the town, and headed north on Route 3 toward the Canadian border. Clouds moved in now making the sky seem even more endless.

i again traveled through rural farms  some harvested with the black soil exposed but many with some planted with  brown and golden crops with the occasional deep blue ponds and lakes . wish I had time and photograph all the beautiful scenes I passed but it would take weeks.

I made my way to the famous, and unknown to me, until a few weeks ago, International Peace Garden. Again my trip was ill planned to see the gardens in bloom but it was still a nice ride around the grounds. There are lovely lakes and the road through the forest lined with aspen trees was beautiful this time of year. I made it to the Peace Towers and Peace Chapel. The Chapel contains inspiring quotes about peace and life. i spent a few reflective moments reading them all and will try and post all of them in a future  gallery here on my blog. A must see if you are in the area. Here is a link to some more photographs form  my drive to Canada my short visit to the Peace Garden. https://www.keepyoureyespeeled.net/north-dakota-trip-photographs/nggallery/north-dakota-october-2015/north-dakota-drive-to-rugby-october-15-2015 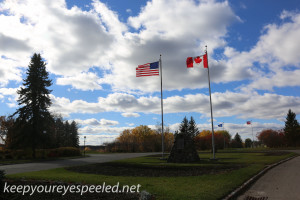 I decided to spend a night in the province of Manitoba, Canada, a first for me. I was already running late and ran into some trouble at the border.  i was the lucky fellow who was chosen, they insisted it was random, to have his car inspected. it was a 45 minute delay. I  knew they were only doing their job but i was not happy. I eventually was allowed to enter  Canada and made my way to another small and beautiful town of Boissevain. It is a lovely place but more on that later. I still have to make plans for today and where i will stay tonight.  I bet, from reading my blog, you guessed I talk a lot too.

“because he had no place he could stay in without getting tired of it and because there was nowhere to go but everywhere, keep rolling under the stars…”
― Jack Kerouac, On the Road 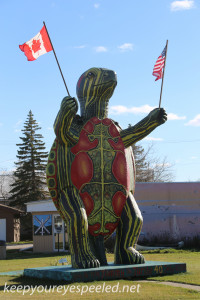