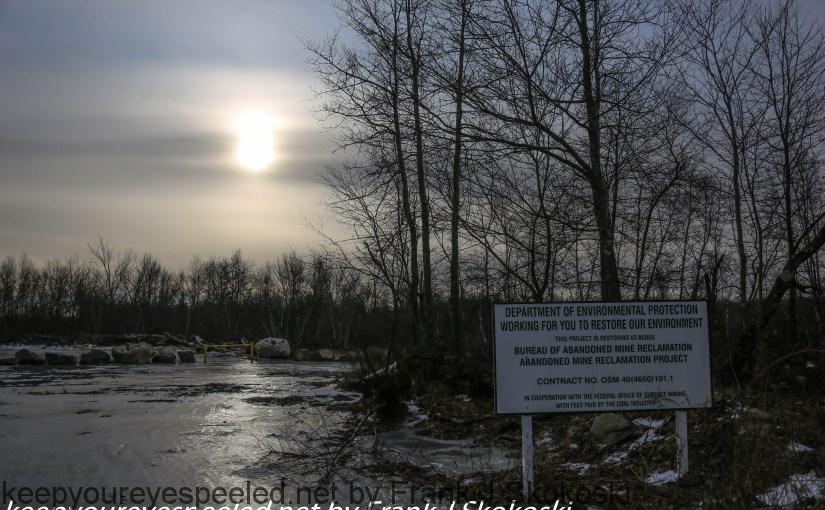 I heard  there was a new mine reclamation project near the village  of Hazle Brook in Foster Township.  I  often hike near  this former patch town. It once had an underground coal mine and coal breaker in the 1800’s. Later  the area was strip mined and the resulting mine pits, culm, slate  and coal silt surround the village.

I usually walk through these  strip mine areas as they they are also near  some large tract of forests which I love to explore.

On Saturday I decided to visit this area. I  parked near the new reclamation site and found that the roads were covered with ice.  The recent heavy rains, followed by frigid temperatures, turned the trails to rivers of ice.

It made for some very difficult walking. I walked through the frozen flat grasslands  that now exist on what was once abandoned strip mines.

New watercourses now flow through  the reclamation area. It appears that this area will be a nice new  habitat for wildlife.  Bird houses were placed throughout the area.

I a met a new resident  of the reclamation area, a red tailed hawk flew overhead in the overcast sky.

I walked for about a mile when the reclamation area ended and I entered  the remains of past strip mine areas.

Here I found the walking even more difficult. The roads were rivers of ice.

I carefully navigated treacherous conditions and made my way to a large strip mine that was now filled with water.  Or should I say ice, due to the frigid January temperatures.

I hiked to the rim of the large strip mine. The birch trees and pitch pines growing there reminded me of the strip mining areas near my home that I explored as a child.

I came upon  a flock of black-capped chickadees feeding on the pine cone seeds.

I enjoy the company of this friendly winter resident of northeastern Pennsylvania.

The ice and snow had fatigued my legs and it was now harder to navigate the icy trails so I decided to head back.

On my way I found the remains of this old campfire. When I come upon these old fire places I always wonder when they were  were  built and who built them. I think of the good times they created and reflect on the  many camp fires we built in the strip mines near my house.

As I was leaving the reclamation area I heard the shrill cry of the  red tailed hawk as it again flew overhead.

I am looking forward to hiking in this area in warmer weather. I think it will attract a lot of wildlife. And I hope to see and photograph some of it. Here is a link to some more photographs from my hike. Hazle Brook hike January 26 2018

“The nation behaves well if it treats its natural resources as assets which it must turn over to the next generation increased, and not impaired, in value.” ― Theodore Roosevelt